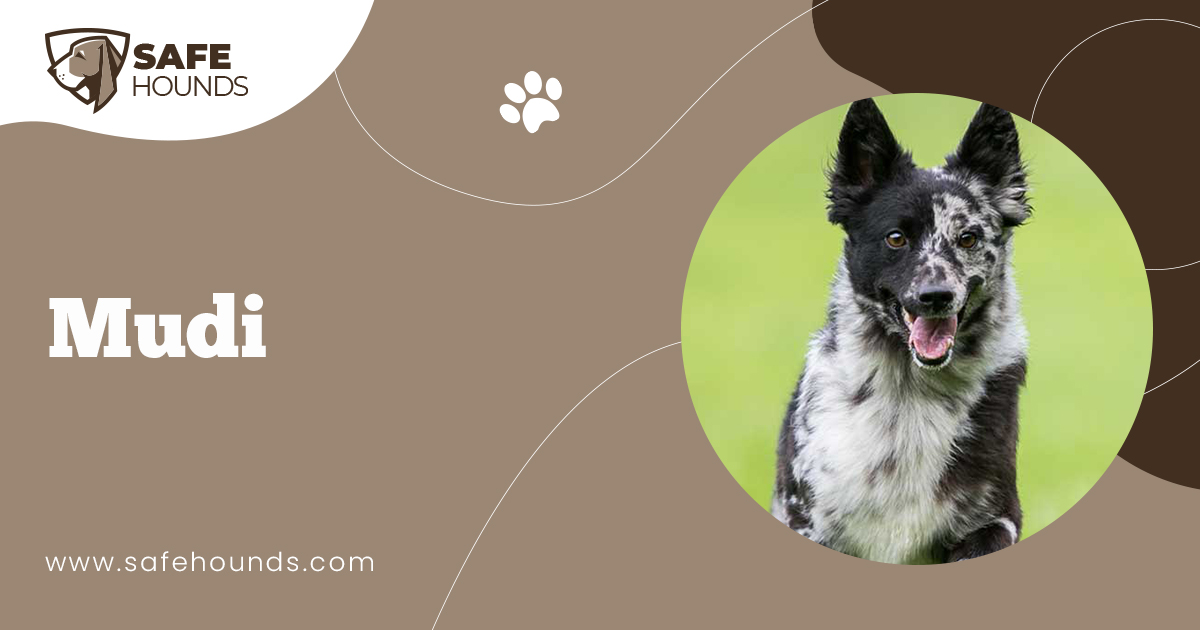 The Mudi is a very rare herding dog that is primarily found in the country of Hungary. This breed has become so rare that it is now estimated there are only a few thousand of these animals remaining worldwide. The largest number can be found in Hungary. Next on the list is the country of Finland. There are a few Mudi found in other parts of Europe, Canada, and the USA. The Mudi is a working breed and they are particularly adept when herding sheep and cattle. They have excelled as search and rescue dogs in the United States and Finland. Eve though this is a working breed, they also excel at obedience, agility, and fly ball.

Without question, the Mudi is a rare dog. The relatively few people who own these dogs consider them incomparable. This breed has a very long list of talents. They also have a very pleasant disposition. This combination makes this breed a real favorite. Mudi owners will tell you that it is very rare to find a moody Mudi. They are highly intelligent and can learn at least as fast as a border collie.

The Mudi is currently recognized by the CKC, NKC, FCI, ACR, and APRI. They are not recognized by the AKC. That is because there are too few of the Mudi remaining. The AKC does maintain records of the Mudi in the USA. This is done through the FSS (Foundation Stock Service). Beginning in January 2008, Mudi will be allowed to compete in performance and companion events through the AKC, as long as they have been recorded with the FSS.

The Mudi is a medium sized sheep dog with shaggy hair. This breed looks like a smaller version of the Belgian sheep dog that is light in build. Of all the Hungarian sheepdogs, the Mudi has the shortest coat. The limbs and paws of the Mudi are quite smooth. The rest of its body is covered with glossy, thick hair that is normally less than two inches long.

The Mudi has a pointed nose and a wedge shaped head. They have muscular jaws with a scissors bite. The skull of the Mudi has a well marked stop and is convex. Its eyes are dark brown and oval. The ears are the shape of an upside down V and they are erect. It has a deep thorax. It is fairly common for puppies to be born without a tail. The back of the Mudi is quite long and straight. Its hind legs are quite wide set. Hair of the muzzle of the Mudi is short and becomes bristly toward the ears. Its coat is dense and can best be described as wavy to curly. The hair is about two inches long and is glossy. Colors range from brown, gray, black, white, red, fallow, and bread-pale. A very rare color of the Mudi is called cifra. This is a dark or light gray that is mixed with a spotted, black, stained color. Actually, there are a limitless number of colors available with this breed.

The Mudi likes to feel independent. This breed is very powerful and courageous. They are afraid of very little, not even a wild boar, which it can easily overpower. The Mudi makes a very good guard dog. This breed has become an appreciated companion dog. Even so, this breed will defend its owners and property. The Mudi has a tendency to bond with only one particular person. They do not generally trust strangers. They have to first trust a person and be confident that the stranger means them no harm. It is not so much that they are aggressive toward strangers. They just need to get to know them before they are comfortable with them. As long as they are raised around them as puppies, the Mudi will do okay with children.

Grooming of the Mudi is not difficult at all. In fact, it is quite easy. Basically, all that is needed is to occasionally comb and brush its hair. This will remove the dead hair. The mudi is an average shedder. The Mudi has an easy to care for coat A brushing about once a week is what is recommended for this breed. The Mudi has short hair on its head and front of the legs and also wavy, curly hair over the rest of the body. As a result, the grooming for the Mudi is minimal compared to many other breeds.

The Mudi was discovered in the country of Hungary as a herding dog with very strong existing breed characteristics. It was not specifically developed to be an excellent herding dog but by performance selection and by need. The very beginning of the origin of the Mudi possibly reaches all the way back into the 15th – 18th centuries. It is difficult to know the exact date of its origin.

According to other reports, the Mudi breed actually originated in Hungary in the 1800s. The complete name of the Mudi is Canis Ovilis Fenyesi. Until the 1930s, the Hungarian herdsmans dogs were all classified together as one. At that time, the Mudi was separated from the Pumi and the Puli. The Mudi, which is an all purpose rural breed, doesnt appear to have resulted from planned breeding. The Mudi is only about 100 years old and formed spontaneously. Even in its country of origin, which is Hungary, it is a rare breed. It began to stabilize in the early 1900s. It was around that time when the standards were written down according to these original traits. One possible reason for the fact that this is such a rare breed is because of the Komondor and Puli. These are more popular and older Hungarian working breeds. The Mudi is probably the least known of all the Hungarian dogs. It is well noted for its multiple uses both inside Hungary and also in other areas. Some of the jobs that the Mudi has performed are sheep herder, cow herder, hunter of wild animals, flock guardian, and a companion dog. In the country of Finland, they are often used as mountain rescue dogs. If it were not for dedicated breeders, the Mudi would be very close to extinction.

Around the time of World War II, a number of Hungarian breeds suffered bad losses. Some breeds almost disappeared. The Mudi was not given immunity as a rare breed. Starting in the 1960s, the Mudi was rehabilitated. Starting in the 1970s, there were a few kennels that tried to revive the Mudi breed to its original status in the country of Hungary. Actually, the Muli was never a popular breed in Hungary. However, it was quite admired as a herding breed and also a watch dog, hunting dog, and companion. Because of its versatility, the Mudi began to be reestablished and in 1966, a new standard was written to apply for recognition by the FCI.

However, this new standard was unfortunately written by a mechanical engineer who only looked at a handful of Mudi dogs. As a result, the Mudi was redefined as a created breed based on what he thought the breed should look like. He didnt consider the natural variability of the breed. The main difference between this new standard and the original standard are in the accepted colors and sizes. The height was downsized in both males and females. The accepted colors were changed from all solid colors to only black, white, and merle. In 2000, a new standard was written to add back the original colors.

The Mudi is primarily used as a herding dog and guard dog. In 1936, they were recognized by the Hungarian Kennel Club.