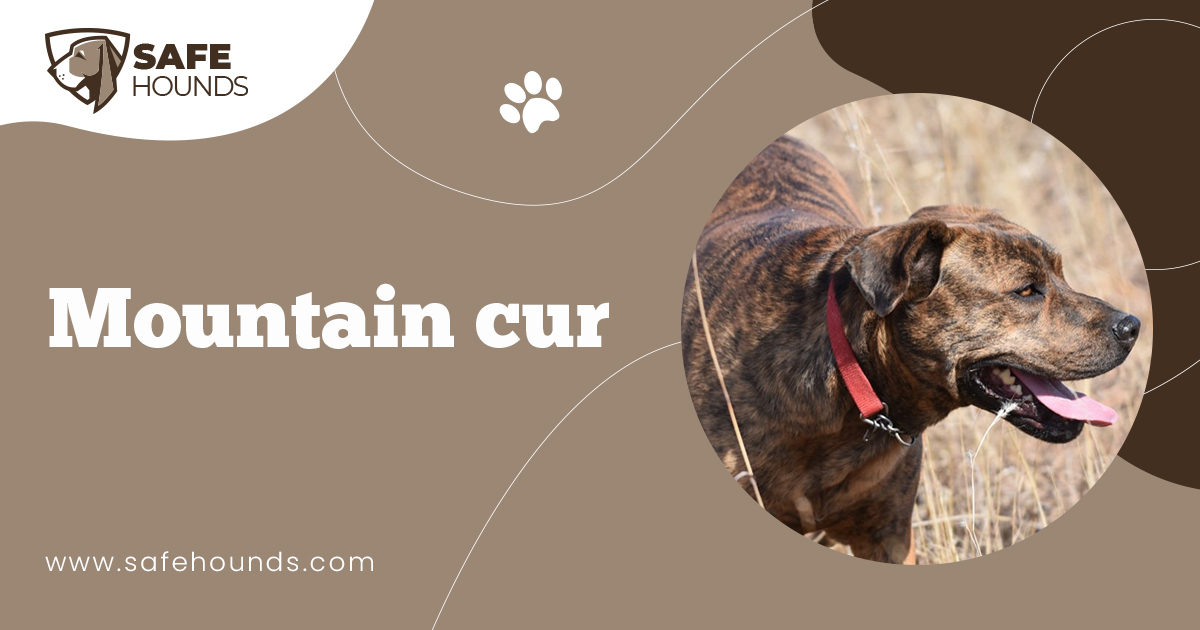 With the head in the air, the dog is running faster than a hound to tree a prey. The hunting technique showed that the dog is fearless and intelligent. The hunting dog is a Mountain Cur, considered as the first true American purebred. This breed has been around since the pioneer days. Forebears of the Mountain Curs were the dogs brought by European settlers. Presently, Mountain Curs are bred mainly in Tennessee, Virginia and Kentucky.

The word cur has a rather derogatory connotation. Curs are often frowned upon and ridiculed as this idiomatic expression means worthless. A dog branded as cur is thought to be of low value. Despite the name, the Mountain Cur has played a very important role to the existence of the pioneers in the Southern Mountains. Without these dogs, the pioneers could never have settled in these mountains. Mountain Curs have guarded frontier families from wild animals. A Mountain Cur is a hunter extra ordinaire. This working dog belongs to the hound group. This breed trees and trails raccoons, squirrels and other small game but they are specifically developed to hunt wild boars. In wild boar hunting, a Mountain Cur takes on the role of a bay dog. The dogs have hunted and provided meat for the families by treeing and trailing prey to their burrows. Money from pelts of animals hunted by the dogs provides family necessities as well as clothes and shoes for the pioneer children. These dogs are so valuable to the existence of the pioneers so much so that when moving to a new home, puppies are either carried by family members or placed on specially designed baskets and carried by pack animals.

A Mountain Cur is a heavy, rugged and well muscled dog. This breed has few genetic health concerns and known to live as long as 16 years. The dog would be a suitable choice for an outdoor enthusiast as this fearless dog would love nothing more than to be allowed to work in the wild to tree, to trail and to chase its prey. Tough and fearless, these dogs are noted to be friendly, warm hearted and very protective of its people.

The Mountain Cur is a medium sized rustic and rugged dog with a slightly longer than tall body that gives it a square shaped appearance. This strong boned and muscular dog exhibits the strength and agility of an excellent hunting dog. This breed has a double coat – a fine and light undercoat and an outer coat that is either rough or smooth but never wooly. The color of the medium short heavy coat varies from brindle, black and brindle, dark brown, black and yellow. White markings enhance the attractive appearance of this dog.

This breed has a broad, square head that is flat between the ears. Short to medium high set ears are firm at the base and hangs down though fully controlled when the dog is alert. Large well opened eyes are set well apart. Eyes are brown or dark in color and exhibit a calm expression. Lips of medium thickness are set in a fine line and enclose strong white teeth that meet in a perfect scissor bite. A Mountain Curs well constructed neck is strong. This stocky breed has a broad and deep chest with moderately curved ribs. The broad back is strong. The dog can have a natural bobtail or a medium length tail that is well feathered. Set for speed, the very strong and well muscled legs have cat-like feet. Dogs with dewclaws are preferred as they serve as additional functioning toes.

Mountain Curs are very tough and decisive dogs. This breed was expressly developed to be hunters that will not be intimidated by large ferocious game. The dog will always be ready to face an angry wildcat. Because this breed is renowned for its strong desire to please its master they are commonly chosen to be home companions but they are recommended for families with older children. The dog is very protective of its master and his property. However, because it is not a submissive and an easy going breed, it is not recommended for everyone. The dog would need a dominant master as given the chance, the dog will be overly protective and would become too hard to handle. Dogs would instinctively need to have an order in the pack. A Mountain Cur is no different. This breed would benefit from obedience training and early socialization where it would learn to submit to the leader of the pack. This breed makes excellent watchdogs because they are suspicious of strangers. Socialization will not diminish the protective instinct of the dog rather it would train the dog to be friendly to other people when no threat is sensed. A Mountain Cur is a very energetic dog. For this reason, the dog would not be a suitable choice for a person living in an apartment or in a small house. A Mountain Cur that is regularly hunted would be sufficiently exercised but one that is kept as a home companion would need to be taken every day for a walk or be provided with a fenced in yard where it can run freely.

The Mountain Cur is a low maintenance breed. This is a working breed. Rather than for the appearance, these dogs are valued for their working abilities. Moreover, Mountain Curs are short haired dogs. Brushing the coat occasionally would ensure that the good condition of the hair and the skin is maintained. Brushing will also remove dead hair. Frequent bathing is not recommended as it will remove the natural oils that moisturize the skin. Dry skin can result to skin problems. However, nail clipping and ear cleaning must be done regularly.

The book Old Yeller tells the story of a boy in frontier Texas. Old Yeller also refers to the bobtailed and yellow short haired dog featured in the story. The dog was explicitly described by the author as a fearless hunter of bear. Old Yeller was a dog is not intimidated by animals much larger than its size. The dog would typically latch on the nose of a wild bull. Old Yeller is noted to be an outstanding hunter of small game as well. Mountain Cur was never mentioned in the book but it is apparent that the author was describing the dog typically used by the pioneers. It is probably due to the fact that back then the dogs dont have an individual identity.

Mountain Curs are indispensable dogs of the pioneers in the Southern Mountains. The mountain in the name accounts for the fact that the dogs are typically raised by mountain settlers. However, these hardy dogs would do as well in the harsh living conditions of the dry and swampy areas. Ancestors of the Mountain Curs are believed to have been brought by Europeans seeking homes in the New World. Bobtailed yellow curs were brought by Hernando de Sotto to the South. Spanish explorers used the dogs to protect them from wild animals. These dogs were also used to drive hogs. Found by hunters and settlers, these dogs have spread to the Carolinas, Virginia, Kentucky and Tennessee. The dogs brought by the European settlers were primarily breeds of hounds and terriers. These dogs were crossed with the Indian Cur and other native dogs and resulted to the creation of a breed of hunting dog which was eventually named Mountain Cur. Because of the hound genes, Mountain Curs are noted for their excellent scenting abilities as well as for their loud and resounding clear bay. The terrier blood gave this breed an incomparable hunting tenacity. A Mountain Cur is first and foremost a hunter. But would you believe, this breed is known to round up not only regular cattle but feral pigs and Texas Longhorn Cattle as well. This herding ability was attributed to the Beauceron, the French herding breed that was introduced during the early years of the dogs development.

The mountain people have greatly depended in these dogs until industrial revolution made jobs available in the cities causing mountain settlers to relocate in industrialized areas. The Mountain Cur population started to decline after the Second World War. In the late 1940s very few specimens were left. Four individuals were credited for saving the breed from total extinction. Carl McConnel of Virginia, Dewey Ledbetter of Tennessee, Woody Huntsman of Kentucky and Riley Daniels of Georgia were brought together by their interest for the breed through the Mountain Music Magazine. In 1956, the Original Mountain Cur Breeders Association was organized by these men. The breed was restored and from the original Mountain Curs other types with individual identities were developed. The Treeing Tennessee Brindle, the Mountain View Cur and the Stephens Stock all used to be recognized as Mountain Curs until they were registered as separate groups.