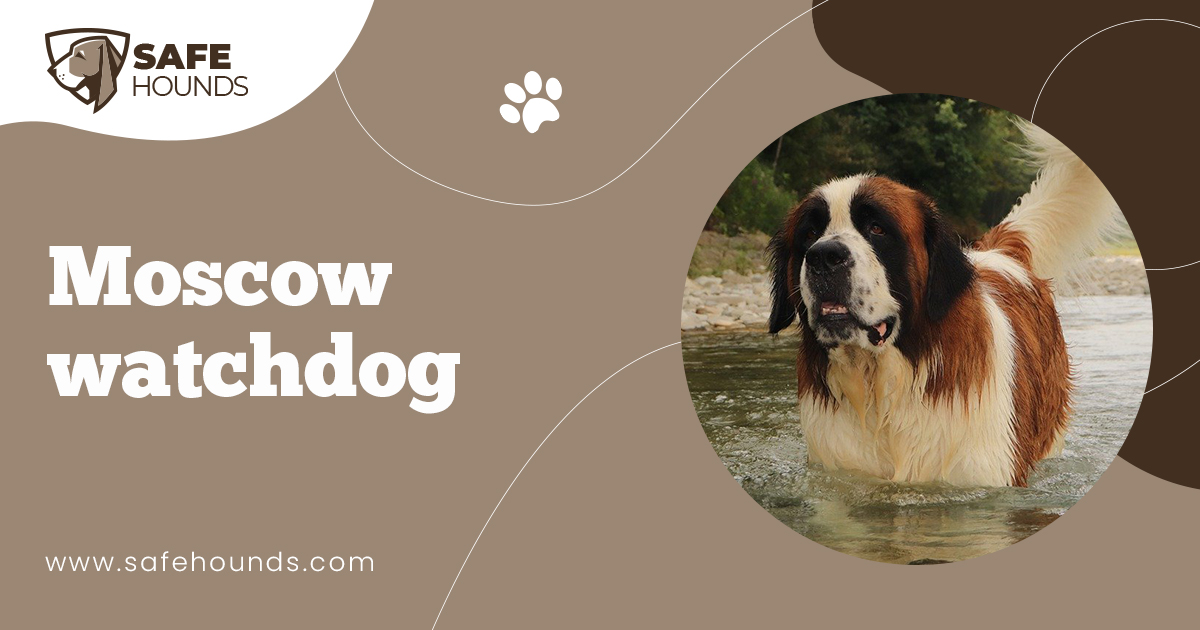 A very large breed of dog that closely resembles a St. Bernard would always be ohhed and ahhed by the public at military parades as aside from the well balanced conformation, the thick red and white coat adds to the attractive appearance of the dog. The same breed of dog would be seen at rocket launching sites as well as in military airports. The massive size and the ferocious look of these dogs would be enough to intimidate a potential wrongdoer. These dogs that are often seen at the Red Square are the Moscow Watchdogs the pride of the Soviet military. A Moscow Watchdog is a very large breed big boned and very muscular. Surprisingly, the dog is not clumsy. This very agile dog can easily overtake a fleeing intruder.

The Moscow Watchdog was developed by the Soviet military to be military canines. The St. Bernard, Caucasian Ovcharka and the Spotted Russian Hound are the progenitors of this breed. These dog breeds were noted to have the desirable qualities necessary to develop a breed of dog that will be utilized as military watch and protection dogs. The Caucasian Ovcharka is noted for its ferociousness and cautious temperament. The St. Bernard is a large breed noted for its strength, intelligence and well balanced temperament. Breeders have made a wise choice for the Moscow Watchdog is indeed an excellent breed of protection dog as it possesses the ideal physical and mental traits of its forebears.

The Moscow Watchdog was developed in the 1950s but the breed has remained rare. The breed is unknown outside its country of origin. The breed was only made available to the public after the collapse of the Soviet Union. Presently, the breed is becoming popular in Europe and in United States. The Moscow Watchdog is generally a healthy breed with a life expectancy of about 11 years.

The Moscow Watchdog is a beautiful breed. This tall big boned dog always attracts attention because of its massive structure. This breed generally measures from 25 to 27 inches at the withers and weighs from 110 to 150 pounds. The hefty form is covered with well developed longish hair that enhances the massive and intimidating appearance of the dog. This appearance is apt for the job this breed was expressly developed for. As the name suggests, the Moscow Watchdog was developed to be a protector.

A Moscow Watchdog has a massive head. The skull is wide, the forehead rather prominent. Well developed cheekbones are rounded giving a soft look to the cheeks. Superciliary arches are well defined. A Moscow Watchdog has medium sized round shaped eyes. Black eyelids enhance the forward looking expression of the dark colored eyes. Big nose is black in color. The front edges of the triangular shaped ears lie close to the head. Bulky, white well set on teeth meet in a scissor bite.

This breed has a short massive neck Muscular withers are broad, high and very prominent. The broad chest is deep and long. The straight back is muscular and broad. The belly is well tucked up. The dog has powerful legs with large rounds paws and toes that stand slightly apart. Wide long tail that reaches the hocks is set on high. At rest the tail that forms a slight curve at the end hangs down. An excited Moscow Watchdog raises its crescent shaped tail over the backbone.

The Moscow Watchdog is a double coated breed. The undercoat is dense, the strong guard hair lies close to the body. Hair is shorter ion the head and on the face but more developed on the neck especially in dogs. Males have a mane and a shaggy patch of hair behind the ears. Hair is longer on the backside of the hind legs. Longer hair covers the tail as well. This breed may have a black mask but the coat is always red and white in color.

This breed was primarily developed to be a protection dog. These dogs are indeed intelligent, easy to train and possess a well developed protective instinct. These dogs will protect the territory or the areas assigned to them for protection. Protecting the family though is the dogs prime mission. These dogs will protect their people even if it means putting their lives on the line. Fear and retreat are foreign words for this breed. A Moscow Watchdog has a well developed protective instinct. Nevertheless, the dog would benefit from training conducted by an owner who has what it takes to be the leader of the pack. The training is not aimed to improve the guarding abilities of the dog but to define the order in the pack. Remember, these are massive dogs. An untrained family companion will be very difficult to handle. Surely, you would not want the dog to take YOU for a walk. A Moscow Watchdog is a highly energetic breed. The dog can live peacefully with other dogs. They are known to be patient and gentle with the children but because of the massive size, small children and this breed will not be a good combination. These dogs are not recommended for apartment life or for a small house with a small yard as this breed needs lots and lots of space.

A Moscow Watchdog is a self-cleaning breed. This means that frequent bathing will not be necessary. Bathing the dog three to four times a year will ensure that the natural oils that weatherproof the coat will not be stripped off. However, you will notice that the dog has lots of hair. This hair will form into tangles if a brush is not regularly used on the dog. The dog should be groomed weekly. The tangles and the knots especially on the plumed tail can be the worst nightmare of a Moscow Watchdog owner.

The Moscow Watchdog hails from the Soviet Union. It is quite common for any army to have highly trained canine units. The Soviet Union is a superpower with more troops, more artilleries and nuclear weapons. Would it be any wonder if the army would not settle on any breed of dog to be trained as their canine units? The Soviet army has to maintain their superpower reputation thus it has spared no expense to create a dog breed that will be trained to be their armys canine units. The breed that will be developed has to adapt well to the harsh weather conditions of the Soviet Union. The breed has to be hardy to get through the unfavorable situations that it will be subjected to. In short the dog has to be of prime quality the best of its kind. Creating a new breed should be a simple task for a superpower that has rivaled the United States in space exploration. Unfortunately, the series of breeding programs failed causing the breeding experts to end up in Siberian working camps. Failure was attributed to the poor quality of the breeding stock used.

Gregoriy Pantelenovich Medvedey, a general in the Red Star military base at the outskirts of Moscow has used his expertise in dogs to select breeds with the desirable qualities to be used as the foundation stock for the new breed. The Caucasian Ovcharka, the St. Bernard and the Spotted Russian Hound proved to be a good combination. Russia was scoured for the best specimens of the Caucasian Shepherd and Russian Spotted Hounds. These specimens were crossed with the St. Bernard champions that were obtained from the Czecks, Slovaks and Germans. And from the programmed breeding in Bolshevik Russia, the Moscow Watchdog was born.

The Moscow Watchdog is a large breed, strongly built and renowned for its excellent scenting ability. The breed was proven to be resistant to a lot of common canine diseases. More importantly, the breed is noted for its outstanding guarding abilities. This outstanding breed was hidden from the public for a while. The first breed standard was published in 1985. On the same year, the breed was granted the official status from Soviet Russia. These watchdogs were brought to Hungary in 1986 and have been used to improve Hungarian stock. After the collapse of the Soviet Union, the Moscow Watchdogs were made available to the public. The breed was well accepted and has started to gain popularity. This breed became much loved members of the family that will protect its people as well as the property at all cost. The breed standard was approved by the Federation of Dog Breeders of Russia in 1992. The standard was approved by the Russian Kennel Club and by the Department of Animal Breeding and Pedigree of the Ministry of Agriculture of Russia in 1997. The Russian Kennel Club is currently working to have the breed recognized by FCI.