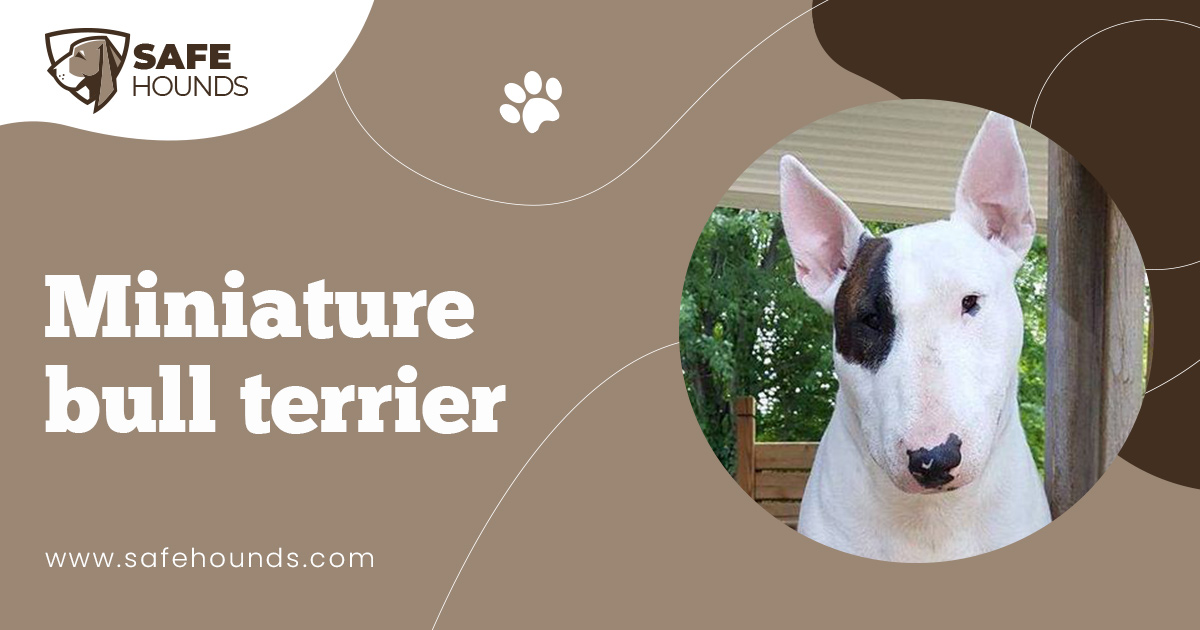 The Miniature Bull Terrier is of the same breed standard as the full sized Bull Terrier. It is only a smaller version of a Bull Terrier that was bred down for convenience and because some enjoy the smaller variety over the larger. Both varieties of Bull Terrier were created for sport and for hunting vermin, which is what many breeds are created for.

The Miniature Bull Terrier is strongly built and symmetrical. It has a keen, determined, intelligent expression. His head is long, strong, and deep with an oval or egg-shaped face. The top of skull is almost flat. It has a very strong lower jaw. His profile curves gently from top of skull to tip of nose. The length of muzzle is perceptibly longer than the length of skull.

The eyes are well sunken and dark. They are of black or dark brown color. They are small, triangular in shape and obliquely set. The ears are very small, thin and close set. They are most often held erect. The nose is black. The neck is very muscular, long, and arched. The back is short and strong. The chest is broad with great dept from the withers to the brisket.

It exhibits a broad, heavily muscled loin. The tail is short, set low and carried horizontally. It should taper to a fine point. The legs are strong and muscular but not overly heavy. He should move smoothly with free, easy strides. The gait is parallel. The feet are cat-like with well-arched toes.

Hair is short, flat, and hard with tight-fitting skin. It exhibits a soft undercoat in winter. The coat is short, flat, and harsh. Most Miniature Bull Terriers stand between ten and fourteen inches at the withers and weigh no more than twenty pounds. White varieties have a solid white coat and sometimes a pigmentation of the skin and markings on the head. In colored varieties, color is dominant over white. Black brindle, red, fawn and tri-color are also common.

Though this breed was once considered a fierce gladiator, it is much gentler now, as its hunting and killing days seem to be over. A Miniature Bull Terrier might have a preventive nature and it might defend its owner in a critical situation. However, it is not bred to be a guard dog. The Miniature Bull Terrier is courageous, fun-loving, active, and fearless.

They do not do well in homes where they are left alone for 8 hours a day. They can be wonderful pets if thoroughly socialized and trained. Due to the busy nature of life, they not recommended for most households. They are do well with both adults and children, but may be too energetic and boisterous for small children. They cannot tolerate teasing so children should be taught to respect them. They can be very protective and willful. Miniature Bull Terriers may try to join into family rough housing or quarrel.

They can be aggressive with other dogs. Unaltered males usually do not get along with other male dogs. Males and females can live together happily and two females can also live well together with care and supervision. They are not recommended in a home with other pets. They make excellent watch dogs.

The Miniature Bull Terrier is easy to groom. An occasional combing and brushing is all that is necessary. It is an average shedder, shedding twice a year. Loose hair can be removed by a daily rubdown with a special rubber glove.

They need very firm training and lots of exercise. Training this breed can be very difficult though. They must be given a lot of companionship, or they may become destructive.

Some male Bull Terriers (including Miniature) have an overabundance of testosterone, which makes them too territorial and aggressive. Neutering often fixes the problem, mellowing the dog out some with hormone balance.

In 1830, when combats between bulldogs and bulls were popular, lovers of this sport decided to create a dog that would attack even more agilely and add to the excitement of the game. By crossing the Bulldog with the Old English Terrier and adding some Spanish Pointer, they came up with the Bull Terrier. Ironically, Bull Terriers were not very successful fighters. In 1850 the white-coated variety, nicknamed the White Cavalier, was obtained and soon became a fashionable pet. The breed has been used as a guard, rat hunter, herder, and watchdog.

In 1914, the Miniature variety was defined as twelve pounds. By 1918, the Miniatures were in decline and the toy variety was practically extinct. The weight limit was then raised to eighteen pounds, which allowed fanciers of the smaller sizes to refresh the gene pool of the breeding dogs. At the beginning of the 20th century, weights between fifteen and fifty pounds were allowed but judging was divided by size limits.

Membership to the MBTCA is open to fanciers and breeders who are interested in exhibiting at AKC dog shows and/or performance events. Members also are encouraged to support breeding towards a healthy Miniature Bull Terrier who fits the standard in both type and temperament. It is also open to those who simply love the Miniature Bull Terrier and seek association with fellow fanciers. The MBTCA publishes a breed magazine, A Little Bull, four times a year and sponsors various trophies and awards, as well as conducting national and regional specialties and shows.