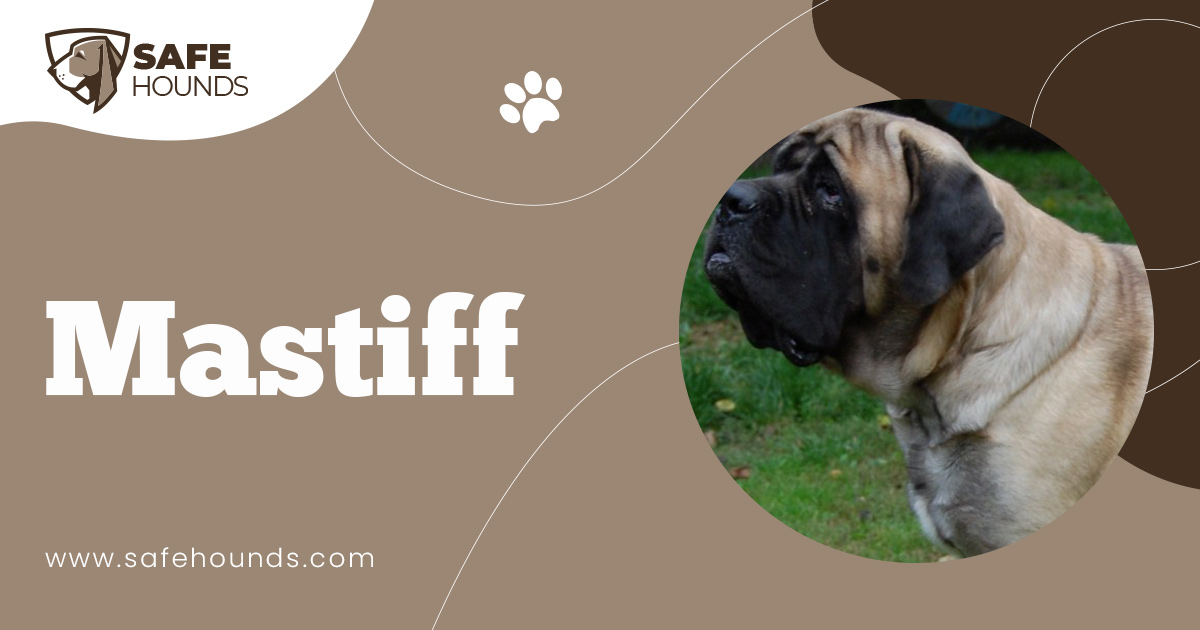 The Guinness Book of World Records recognizes an English Mastiff from England named Zorba as the heaviest dog in the world, at over 315 pounds. Zorba stood thirty-seven inches at the shoulder and was eight feet and three inches from the tip of his nose to the tip of his tail. Zorba set this record in November 1989, when he was eight years old. At the time of measurement, he was about the size of a large donkey.

The Mastiff is powerfully built, with a massive body. It has a broad skull and a head that is generally square.

The size is very large and sound. It gives an impression of power and strength when viewed from any angle. The body is massive with great depth and breadth, especially between the forelegs, causing these to be set wide apart. Muscles are sharply defined.

The back and loins are wide and muscular, flat and very wide in females, slightly arched in males.

The nose of the Mastiff is broad, with widely spreading nostrils when viewed from front, flat in profile. The muzzle is short, broad under the eyes. The lips diverge at obtuse angles with septum, and slightly pendulous to show a square profile. Eyes are small, wide apart, divided by a space as large as both the eyes. Eye color is either hazel or brown.

Ears are small, thin to the touch, wide apart, set at the highest points of the sides of the head.

The tail is set high and reaching either to hocks or a little below them. It is wide at its root and tapering to end, hanging straight in repose, but forming a curve with end pointing upwards, but not over back, when dog is excited.

No height or weight is blatantly specified for this breed, but the approximate height is twenty-seven to thirty-two inches and weight is 175 to 200 pounds. According to the AKC, the Mastiff is one of the heaviest dog breeds in the world.

The short coat of the Mastiff is close lying. Normal colors are apricot-fawn, silver-fawn, fawn, or dark fawn-brindle. It always has black on the muzzle, ears, and nose and around the eyes.

The Mastiff breed is unique. It has a combination of grandeur, dignity, and courage, a calm and affectionate companion to its master, but capable of guarding its family. The breed is good natured, calm, easygoing and gentle. It is a well-mannered house pet. However, it needs sufficient room to stretch out.

This is an extremely loyal breed and though not excessively demonstrative, it is devoted to its family and good with children. It can be very protective of its owners, must be handled well, since it is exceptionally powerful, and can be difficult to control. When an unrecognizable visitor enters the home, the Mastiff will usually place itself between its master and the visitor until their master has indicated that the visitor is safe in a way that appears to be compassionate or friendly.

This particularly large dog demands the correct diet. Much exercise is necessary to keep the dog healthy. The expected lifespan, assuming the right care is taken, is 9 to 11 years.

When purchasing a purebred Mastiff, experts often suggest that the dog undergo tests for hips, elbow, eyes, thyroid, and DNA for PRA.

The Mastiff should not be overfed. To avoid bloat a couple of smaller meals everyday is better than one large one. Because the Mastiff has such a short coat, necessary grooming is minimal.

The breed simply called Mastiff is more properly described as the Old English Mastiff. The Pugnaces Britanniae (Latin) is an extinct breed and ancestor to the English Mastiff. The Mastiff name probably evolved from the Anglo-Saxon word masty, meaning powerful. The Mastiff is descended from the Alaunt and Molosser. It is recognized as the oldest British breed. The Mastiff might have been brought to Britain from an undetermined outside source in the 6th century BC. It was used in the blood sports of bear-baiting, bull-baiting, dog fighting, and lion-baiting. Throughout its long history, the Mastiff has contributed to the development of a number of dog breeds.

When Sir Peers Legh was wounded in the Battle of Agincourt, his Mastiff stood over and protected him through the battle. Legh later died and the Mastiff returned to Leghs home. His Mastiff was the foundation of the Lyme Hall Mastiffs. Five centuries later, this pedigree figured prominently in founding the modern breed.

Some evidence suggests that the Mastiff came to America on the Mayflower, but the breeds documented entry to America did not occur until the late 1800s. In 1835, the Parliament of England implemented an Act called the Cruelty to Animals Act 1835, which prohibited the baiting of animals. With baiting being the main reason for the Mastiff in England, it lost popularity and was virtually decimated in England by the Second World War. However, sufficient numbers had been brought to America by that time to keep the breed going. Since that time, it has gradually risen in popularity, especially in the US, not only for sport but also for looks.

The Mastiff has a longer history than most. Caesar describes them in his account of invading Britain in 55 B.C., when they fought beside their masters against the Roman legions. They fought with such courage and power they made a great impression.

The American Mastiff Club was formed in 1879, and disbanded sometime thereafter. In 1920, the first Mastiff Club of America was founded and the present club was established in 1929.