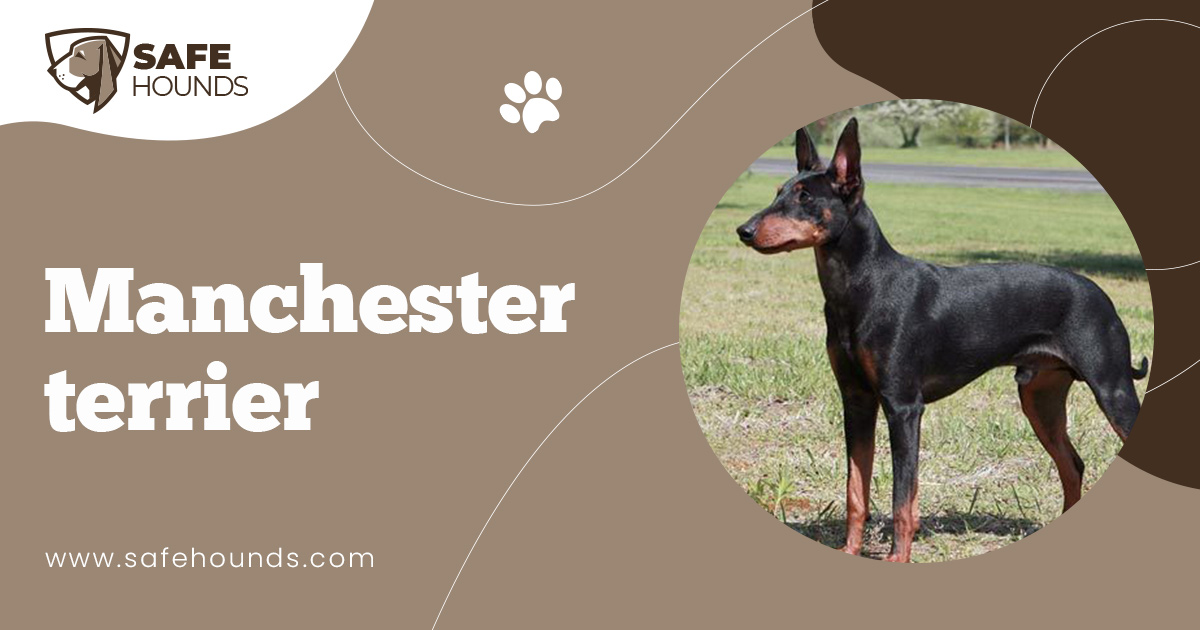 The Manchester Terrier comes in two varieties: standard and toy. The standard variety was popularized in England during the 19th century as vermin hunters. The toy variety became popular as a pet during Queen Victorias reign in England, more for its appearance.

Today, the popularity of the Manchester Terrier has diminished. However, this breed still makes a lovely companion. It has also retained its working ability, which adds to its current uses.

The distinctive looking Manchester Terrier has changed very little since the 1500s. It is an elegant dog, primarily black and tan in color. The toy variety only weighs up to twelve pounds and has naturally erect ears. The standard variety weighs over twelve pounds, up to twenty-two, and may have naturally erect, cropped or button ears. The height is between fifteen and sixteen inches from the withers to the ground.

The Manchester Terriers short, dense, glossy black coat has rich mahogany tan markings. This accounts for the breeds original name of Black and Tan Terrier. The coat is easy to care for. Unfortunately, it is so thin it does not offer much protection from the cold. The Manchester Terrier does shed some. It rarely needs to be bathed. The nails grow quickly and should be regularly clipped to avoid injury and maintain an attractive appearance.

The Manchester Terriers head is long and narrow. The skull and muzzle are of equal length. The eyes are black and almond shaped with black sockets. Its expression is keen and alert. The jaws are powerful. It exhibits a full and well-defined underjaw. The neck is slightly arched. The topline of the back has a slight arch over the loin that falls slightly to the tail. The tail is moderately short. It is thick at the body, tapers to a point at the end, and is carried in a slight upward curve. The legs are straight and exhibit compact, well-arched feet. The toes are like those of a cat. The bone and muscle have sufficient mass to exhibit both agility and endurance.

With persistent, firm training, Manchester Terriers can be housebroken easily. They take well to training. They can excel in dog show conformation, obedience, tracking, agility trials, and earthdog events. Manchester Terriers make excellent pets for active families, even families that travel. The athletically built Manchester will chase anything of any size that threatens its territory. It should have a fenced yard, as it will run off.

The Manchester is admired for its keen intelligence, cleanliness, and versatility. It is an excellent indoor watchdog. It has a little dog with a big bark. The Manchester thrives on companionship, especially with children. It is naturally a companion animal that demands attention from its family. In return, the Manchester Terrier will give affection, loyalty, and protectiveness.

It is a keenly observant and devoted dog. It is lively and good-natured. All of these factors make him an ideal companion.

With proper food, shelter from the cold, exercise, training, and love, the Manchester Terrier may live 15 years or more. Health problems include cataracts, epilepsy, glaucoma, patella luxation, Legg-Perthes (a deterioration of the femur head) and von Willebrands Disease (a bleeding disorder). All breeding animals should be DNA tested for von Willebrands before purchase.

Manchester Terriers should be fed all natural, meaty dog food. Generically made foods will not be good nutrition. Water should be made available at all times. Manchesters may overeat if permitted to do so, so the amount of food given at a time must be rationed.

The Manchester Terrier requires minimal grooming. Occasional brushing will minimize loose hair and shedding. It is important to check and clean the ears and teeth on a consistent basis. It prefers warm climates but should not be left in the sun for any long length of time.

In 1570, Dr. Caius, in the Encyclopedia of Dogs, mentions a Black and Tan Terrier, which is believed to be the Manchester Terrier, though he referred to a rougher coated, shorter legged dog than we are now accustomed to. By the early 1800s, a closer appearance to the current Manchester Terrier had evolved. In The Dog in Health and Disease by J. A. Walsh, a full chapter was devoted to the Black and Tan Terrier, recognizing it as an established breed for the first time. The description Walsh gave is true today: Smooth haired, long tapering nose, narrow flat skull, eyes small and bright, chest rather deep than wide, only true color Black and Tan. The standard Manchester Terrier is also one of the forefathers of the Doberman.

By 1860, the Manchester district of England was considered the breed center for these Rat Terriers and the name Manchester Terrier was born. Smaller specimens began to gain appeal. Unethically, some were known to introduce Chihuahuas in order to reduce size to as small as two and a half pounds! This resulted in numerous health problems, including apple heads, thinning coats, and poppy eyes. Inbreeding further diminished size. Yet the smaller versions, though delicate and sickly, remained popular for some time.

Smaller Manchester Terriers were carried in leather pouches suspended from the riders belt, earning them the title of Grooms Pocket Piece. Because of their smaller stature, these dogs could not perform like the hounds, but when the hounds ran foxes into dense thickets they were not able to penetrate, the Manchester Terrier gained work. The breed was quickly nicknamed the Gentlemans Terrier.

Just as in its native country of England, the Manchester Terrier gained quick acceptance as a recognized breed in the United States. In 1886, just two years after the American Kennel Club was organized, the first Black and Tan Terrier was registered. The following year Lever became the first AKC recognized Manchester Terrier.