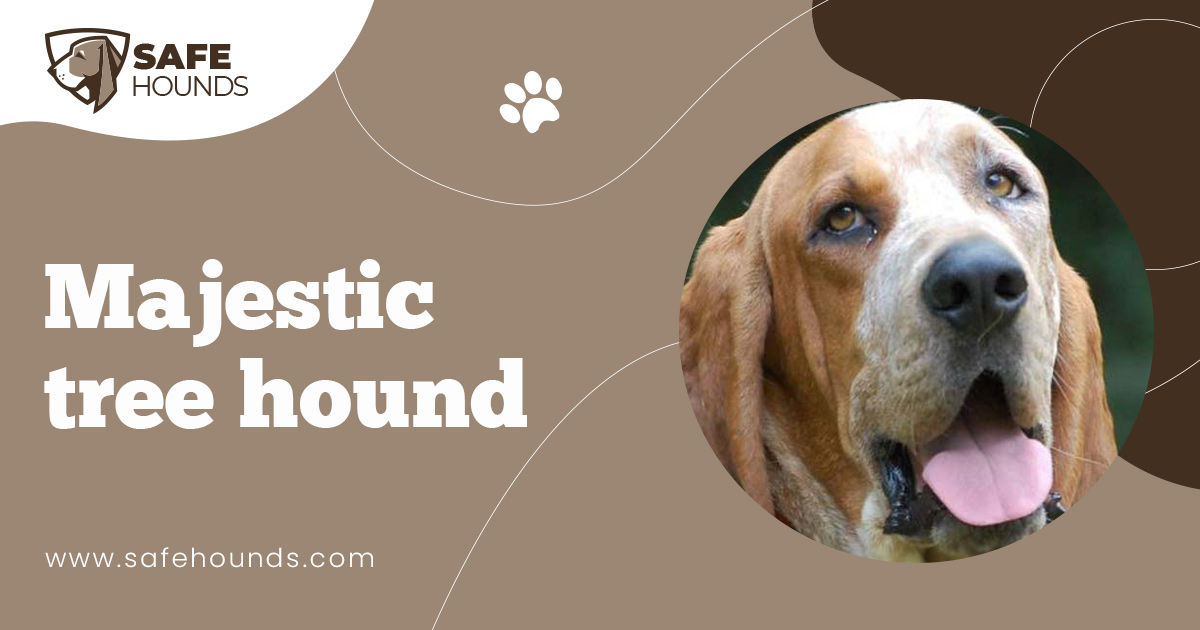 The Majestic Tree Hound is a fairly new breed of coonhound developed in United States. This new breed though was developed from well established dog breeds that have existed in the medieval northern France. The Majestic Tree Hound was developed from the St. Hubert Hound and the Talbot Hound. Other strains of hounds have developed from these ancient breeds. However, a lot of these strains have gone as quickly as they were developed. The Majestic Tree Hound is actually a re-creation of the large hunting breeds developed and utilized by the early American settlers. The breed was recognized and registered by the National Kennel Club in 1980 but these dogs are virtually unknown. This breed was primarily used to hunt big game. The name was given to this breed as apart from the large size, the dog is acclaimed for its exceptional treeing ability. Being a scenthound, these dogs will work at their own pace. But the working ability of this dog can never be questioned. This breed is noted for its endurance and for its persistence to work over rugged terrain, under unfriendly weather conditions to cold trail or to tree bears, bob cats, jaguars, mountain lions and a variety of other large game. This hound has the exceptional ability to flush out these big ferocious cats from their dens or from their hiding places. Due to the ultrasensitive scenting ability, this breed will succeed where other breeds of hounds will fail. This very persistent hunter will go on following a cold trail long after other hounds have given up.

Majestic Tree Hounds are becoming a most sought after breed not only by avid hunters but also by people wanting to have a dog that resembles the large impressive dogs in the movies while having the temperament of an ideal home companion.

A Majestic Tree Hound is a large breed with a powerfully built body. This breed is generally taller than most breeds of hounds. Height of males range from 26 to 30 inches and females stand from 24.5 to 30 inches. Males weigh from 80 to 110 pounds. A females weight ranges from 75 to 100 pounds. The head is narrow and rather long but proportionate to the size of the body. From the temples, the head slightly tapers to the end of the muzzle. The long and deep foreface is even in width giving the dogs head a rather square outline. Deep sunk eyes colors range from deep hazel to yellow but eye color generally corresponds to the coloring of the dog. A Majestic Tree Hound has a dignified and noble expression. This hound also exhibits wisdom, solemnity and power. Long hanging ears are typical hound characteristics. A Majestic Tree Hounds ears are thin and soft to the touch. This breed has very long ears – a minimum of 24 inches in males and 23 inches in females. Set on low, the very long ears fall in graceful folds with the ends curling inwards and backwards. Large nose has well opened nostrils. Lips fall squarely in front and form hanging flews from behind to continue as folds of loose skin on the neck to form dewlaps. The neck of this breed is long. The muscular shoulders are well sloping backwards. Well let down chest have well sprung ribs. Deep loins are slightly arched. Straight forelegs are well boned, hind legs are very muscular.

This breed has a short thick and dense coat that allows the dog to withstand rough weather conditions. The Majestic Tree Hound is a breed of working dog. This breed is preferred for its working abilities rather than for its appearance. Nevertheless, the dog has an attractive appearance because the coat comes in beautiful color combination. A White Majestic, Red Majestic, Spotted Majestic, Tri-Color Majestic, Majestic Black and Tan, Majestic High Tan/Saddle back or a Majestic Red or Blue Tick exhibiting a swinging free and elastic gait and continuously giving voice while after its prey is certainly an impressive scene to watch.

A Majestic Tree Hound is a joy to live with. This hound breed was developed and originally utilized to hunt large and small game. However, a Majestic Tree Hound is also an affectionate breed. This big hound with its big booming voice may show an intimidating appearance but the dog is actually very friendly. It is not uncommon for this breed to meet strangers with a happily wagging tail. This breed gets along well with other dogs. A Majestic Tree Hound is a people oriented breed. This dog will be gentle, playful and protective of children it has not grown up with. This intelligent breed will thrive on praises from the master but it will equally accept reprimands and corrections.

A Majestic Tree Hound is a working breed. Working dogs are highly valued for their working abilities. The breed comes in attractively colored coats but the appearance takes a back seat as what is most important is the dogs hunting capabilities. Nevertheless, a Majestic Tree Hound would benefit from a regular grooming routine. Being a short coated breed, the dog will need very minimal maintenance. Occasional brushing would be sufficient to maintain the coats good condition. This hunter is expected to have high exercise requirements. A dog regularly hunted will take care of its own exercise requirements. One that is kept solely as a home companion would need to be taken on long walks every day.

Hounds are dog breeds commonly used for hunting. These dogs were developed to chase their prey by using either the excellent sight or scenting ability. Scenthounds rely on their exceptional scenting ability to follow their prey. Sighthounds, on the other hand are noted for their superior eyesight. These dogs have to have speed and stamina as they are required to chase the hunted animal once it was sighted.

The Majestic Tree Hound is a recently developed breed of scenthound. The breed was recognized and registered by the National Kennel Club in 1980. Breeds of hounds developed in medieval northern France were used as the foundation stock of this breed. Western hounds used to hunt big game were crossed with Bloodhounds existing in American soil. The Majestic Tree Hound ancestry can be traced back to the breed perfected by Francis Hubert in southern France during the early years of the 8th century. Saint Hubert is considered as the patron of hunters. When he died, monks and bishops continued breeding the hounds in monasteries throughout Southern France, in Italy and in Belgium. Saint Hubert Hounds were largely utilized to track down not only big game but poachers as well. During the later part of the 8th century, the Saint Hubert Hounds were crossed with other hounds resulting to the creation of a new strain which was given the name Talbot Hound. Both the St. Hubert Hounds and the Talbot Hounds were referred to as Blooded Hounds. The Bloodhound name was coined from this title.

Bloodhounds were brought to England by William the Conqueror in 1066. The hounds were widely used to trail deer and later on to hunt foxes. Hunting foxes on horseback became a favorite sport of the English nobility. Crossing of Bloodhounds with Greyhounds became inevitable. This crossing produced a strong breed of running hounds. Bloodhounds and Foxhounds were brought by early English settlers in the American colonies. These dogs became the foundation stocks for the development of most of the American Foxhounds and Coonhounds. Over the years, strains of these hounds have come and gone. The Majestic Tree Hound resulted from careful selection, breeding and culling. This breed can be considered as a reconstitution or recreation of the old strains of American hounds owned by the early settlers. After a long period of selective breeding, a dog type with most desirable working qualities was developed. The Majestic Tree Hound possesses an ultrasensitive scenting ability, a beautiful voice and an exceptional treeing ability. The Majestic is a beautiful hound that possesses a well developed functional conformation. The breed is highly valued by hunters and non-hunters alike as the breed is also noted for its even temperament.

Rather than registering the new strain into the registry of an existing breed of coonhound, breeders have considered it more appropriate to register the new strain as a new breed of hound. To promote the breed, a committee was formed in 1979. The National Majestic Tree Hound Association headed by Lee Newhart, Jr. was formed in 1980. At the first meeting, the constitution, by laws as well as the first standard was established. In April of the same year, the first Majestic Tree Hound was registered with National Kennel Club.