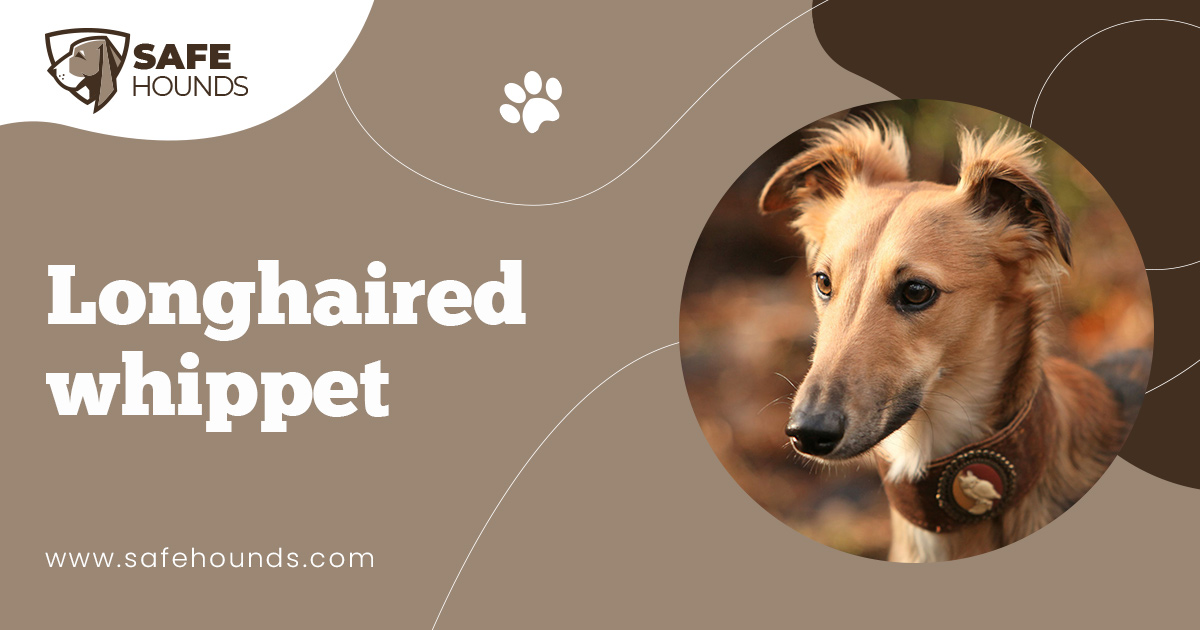 Silken Windsprite  this was the nickname given to the Longhaired Whippet because the breeds slightly wavy, soft and silky long hair enhances the elegant and graceful flowing movements of the dog. The Longhaired Whippet was developed (as the name suggests) from the Whippet. This breed was developed about 50 years ago. Being a relatively new breed, the Longhaired Whippet should have a precise origin. The dog has certainly descended from the Whippet but whether it is a purebred or not is the point of controversy. Walter Wheeler, a long time breeder of Whippets asserted he developed the long coated variety by bringing out the recessive longhair gene of the breed. Although it was believed that the long haired gene was contributed by other breeds, recent studies have verified that the Whippet and the Greyhound (Whippets forebear) indeed posses the longhaired gene.

The Longhaired Whippet is a medium sized breed that has a very similar build to a Whippet. Both breeds have the typical curvy conformation of sighthounds although the Longhaired Whippets slightly larger outline is covered with long slightly wavy coat that comes in exciting rainbow colors. The full long coat softens the outline and increases the appearance of the dog but barring the long hair there should be no difference in the dogs conformation.

Whippets were originally used to hunt by sight. These dogs course game at great speed. The Longhaired Whippet has the speed of its progenitors. The dog can run up to 35 miles per hour but this breed has an advantage over the smooth coats. Unlike the smooth coated Whippets, the long hair provides the dog more protection from injuries and keeps the dog warmer in cold weather.

The Longhaired Whippet is very similar in build to the smooth coated Whippet. What makes the breeds distinctly different is the decorative coat of the longhaired breed. If the long hair is trimmed to give the dog a smooth short coat, even a Whippet-wise person would hardly see the difference. The Longhaired Whippet is a medium sized breed with an athletic body. Compared to the smooth coated Whippet, this breeds skin is suppler and has greater substance presumably to support the dense long hair. This breed has a double coat. The undercoat is sufficiently thick to provide warmth but it does not give the dogs coat a bulky appearance. The topcoat is slightly wavy, soft and silky. The long hair forms breeches and feathering on the back of the forelegs. The tail that is profusely covered with hair and the long hair that frames the face enhances the beautiful appearance of this breed. Short hair covers the muzzle, the front of the forelegs, the hocks and the feet. Coat coloring and markings are immaterial for this breed as long as they enhanced the elegant appearance of the dog.

This breed has a moderately long head, a strong muzzle and a black pigmented nose. Very large eyes have dark or almost black irises. Eyes have a bright and questioning expression. Rose ear is the only acceptable ear type for this breed. A Longhaired Whippets soft rose ear has a stiff base. The long tail that has a good feathering is usually carried low with the end of the tail forming a graceful swirl. The dog has a powerful broad and very muscular back, a smooth graceful topline, a deep brisket and a wasp waist tuck up. This breed is an extremely fast runner because apart from the sleek conformation, the dogs straight forelegs and muscled well angulated hindquarters give the dog great speed.

A Longhaired Whippet is a sighthound. Sighthounds tend to have a dignified temperament. Longhaired Whippets though are very people oriented. Originally utilized to hunt, the dog has adapted to being cuddly pets because of their sweet, affectionate and biddable personality. This very lively and playful breed would make outstanding companions of the children. You can be sure that the child and the dog would be behind the tomfoolery in the family. These are really well behaved pets. Because of its heightened sense of hearing the dog may bark a warning when there are intruders. However the dog should not be expected to be guard dogs given that they are not dominant at all. This breed accepts and tolerates other dogs in the family. These dogs are obedient and easy to housebreak. Because of the size, you can have two or three Longhaired Whippets as your pet would be happiest if allowed to live with several dogs of its kind. This breed is a great runner. Protected by its long coat, the dog would run in all kinds of weather. Surprisingly, this energetic dog would sleep all tangled up all day and would not be destructive like other dogs that are not given the chance to expend its pent up energies. This breed would do well in apartments as they are not very active indoors. Longhaired Whippets are not yappy dogs.

A Longhaired Whippet is not a high maintenance breed. This breeds long silky hair and the not so thick under coat does not need extensive grooming. The dog is not a heavy shedder. A once a week grooming session would be enough to maintain the good condition of the silky coat. Frequent bathing is not recommended so as not to strip the natural oils that moisturize the coat.

Historians believe that dogs are either developed from wolves or from other dog breeds. In both cases, the new breed that is created would somehow manifest the physical characteristic as well as the temperament of its forebears. An apple after all would not fall too far from the tree. However, there are instances when a breed that is distinctly different from the foundation stock is developed. This is true with the Longhaired Whippet, a breed with a controversial history.

Whippet is a breed of English sighthound that excels in racing, lure coursing, agility and fly ball competition thus the breed has earned the title the poor mans greyhound. This breed is also acclaimed for being an excellent hunter. A Whippet is a medium sized dog whose thin skin is densely covered with short hair. A new breed was developed in United States from this smooth coated English sighthounds. What has become the point of controversy with the new breed is the fact that it is longhaired. The developed breed was given the name Longhaired Whippet.

The Longhaired Whippet, a medium sized sighthound was developed 50 years ago by a Harvard graduate named Walter Wheeler. Mr. Wheeler was a long time Whippet breeder. He claimed that the Longhaired Whippet is a purebred. This breeder has recounted how he was able to successfully bring out the long coat recessive gene of the smooth coated variety. The breeding program was questioned by a lot of dog enthusiasts. Could the long haired variety really have descended directly from the smooth coats? Or has the breed resulted from crossing a Whippet with a long coated breed of similar type like a Shetland Sheepdog?

Greyhounds are one of the foundation stocks of Whippets. A scientific research done in 2006 has proven that long hair exists in Greyhounds. This supports the idea that the Longhaired Whippets have indeed developed from Whippets. Additionally, a chapter in The New Book of the Dog written by Robert Leighton in 1906, made mention of two varieties of Whippets, a short and a long coat. In the 1920s, a Whippet owner confirmed the existence of wirehaired Whippets although the long hairs are rather sparse. Pictures of wirehaired Whippets were also seen in old dog books. Non-smooth coated dogs were also mentioned in some books. Paintings and other artwork depicted long coated dogs that are very similar to the Whippet. It is highly probable that longhaired Whippets have existed years ago and for some reasons have gone extinct. On the other hand, it is also possible that a Shetland Sheepdog could have influenced the creation of the Longhaired Whippet. DNA studies conducted by UC Davis in 2004 have shown that the breed has MDR 1-1, an autosomal recessive gene. This gene causes some dogs to be sensitive to chemicals like Ivermectin (a wormer) MDR 1-1 is found in Shetland Sheepdog but not in Whippets.