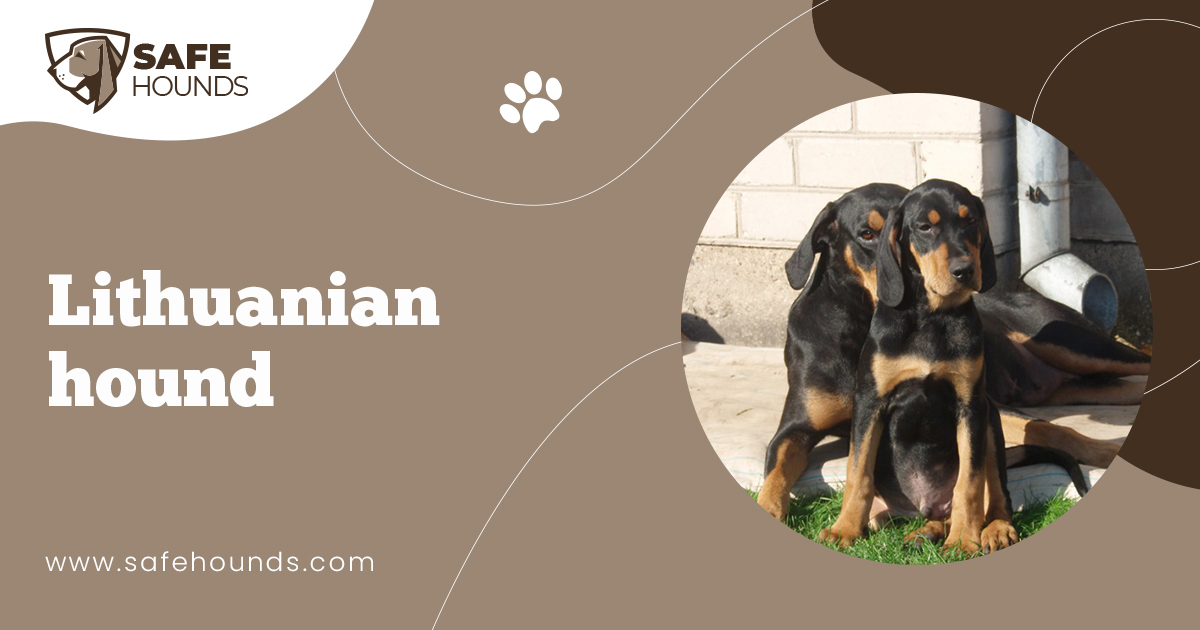 The Lithuanian Hound is a fairly new breed of hunting dog. The dog was developed by Lithuanian hunters in the 20th century. This breed is in fact considered to be the newest breed of Russian scenthound. Lithuania is a game rich country. Hunters trying to create a Curlandish Hound type of hunting dog have crossed local hounds utilized to hunt big game with Saint Hubert Bloodhounds, Beagles, Polish Hounds and later with Russian Hounds. The resulting breed is the Lithuanian Hound, a scenthound that is acclaimed for its excellent hunting abilities. The dog is noted for being a relentless hunter. A Lithuanian Hound is brave, fast and vigorous. The dog has a beautiful voice. The breed is valued for its excellent sight and for its well honed hunting abilities. The dogs agile movements, stamina and persistence make it an excellent hunter of foxes, boars and other large game. This enthusiastic hunter will keep on working tirelessly as it has an inherent desire to please its master.

A Lithuanian Hound is often mistaken for a Black and Tan Coonhound or a Rottweiler probably because of its build and the glossy black coat and tan markings. This breed is not as heavily boned as compared to other breeds of hunting dogs but it has a well muscled body. Lithuanian Hounds have gained enormous popularity in Lithuania but after the collapse of the Soviet Union interest for the breed waned. Keeping foreign breeds of hunting dogs became a fad until the Lithuanian Hound is almost on the brink of extinction. This breed is relatively unknown outside its country of origin. The breed is back on its feet now, thanks to the restoration efforts made by breed enthusiasts. It is believed that although still low in numbers, the Lithuanian Hound is here to stay.

The Lithuanian Hound is a hardy and sturdy breed. Unlike other working dogs, this breed has a less heavily boned body although it has a sleek and muscular build. This hound measures from 21 to 24 inches at the withers and weighs from 60 to 75 pounds. The Lithuanian Hound has a large wedge shaped head with a broad forehead and a medium sized muzzle that is slightly shorter than the forehead but well proportionate to the size of the head. Medium in size, the oval shaped eyes are brown to dark brown in color. A Lithuanian Hounds eyes have a vibrant and fresh expression. The wide large nose is black. Medium length triangular shaped ears with rounded tips hang close to the cheeks.

The neck that is slightly shorter than the head is very muscular and tightly fitted with skin creating no dewlaps. The dog has a level topline, a long, deep and broad chest with well developed ribs. Front and hind legs are straight. Thighs are muscular. Strong round feet have compact toes with strong black nails. Well developed pads are black in color. Sword shaped tail is thick at the base. Tail is raised above the backline when the dog is excited and lowered to the level of the hocks when the dog is relaxed. The tail is densely covered with hair. Dense and glossy hair grows from 3 to 5 cm on the back and longer on the neck and tail. Hair that covers the ears and tail are shorter. A Lithuanian Hound is a black coated breed. Some specimens may have brown colored hair in the forehead, ears, snout and chest. A small white spot may also be found on the chest.

A Lithuanian Hound is a persistent and aggressive hunter. This breed was specifically developed to hunt. On a hunt, the dog will perform to the best of its ability not only because of its love for hunting but also because the dog is eager to please its master. This kind of temperament makes this dog adapt well to being a home companion. This breed is intelligent thus housebreaking and obedience training will not be a problem more so if the master has what it takes to be the leader. The dog is a persistent and aggressive hunter but it shows a well balanced temperament to its people. The dog makes a pleasant companion because it is always eager to please.

A Lithuanian Hound is a short haired breed thus it would need very little grooming. The naturally glossy coat would not need extensive grooming as occasional brushing will be sufficient to maintain its good condition. An owner must thoroughly check the dog for ticks, fleas and other parasites after it is hunted. This breed is not recommended for apartment living. This is a highly energetic dog. It would need at least a small yard where it can use up its excess energies. The dog should also be taken for long walks as well. A Lithuanian Hound would make an ideal jogging or hiking companion.

Lithuanian forests, then and now are teeming with wild animals so that hunting with dogs has always been a popular sport. Deer, wild bear, elks beaver, wolves, foxes and a variety of birds make is possible for a hunting enthusiast to indulge in his favorite pastime all year round although the busiest hunting month in this country starts from November to January. The Lithuanian Hound is one of the hunting dogs highly valued for their excellent hunting abilities.

Dogs have been the companion of man for millions of years. Dogs have been utilized in a lot of ways one of these is hunting. A hunter uses different types of dogs. A hunter would make use of a gun dog to identify the location of the animal being hunted. After the shot, a retriever will be used to recover the quarry. A hound on the other hand is a dog type that that is utilized by a hunter to track the quarry. Once the track of the animal being hunted is found, a hound will begin the chase. A breed of dog is highly valued by Lithuanian hunters for its beautiful voice and impressive eyesight that proven to be most valuable assets in hunting wild boars and other game. This breed is the Lithuanian Hound.

A Lithuanian Hound is a rare breed. This excellent hunting dog is relatively unknown outside its country of origin. Not much is known how this breed developed as very few written documents about the breeds origin exist although several varieties of hounds were mentioned in the 16th century Statutes of Lithuania. Lithuanian dogs are believed to have existed at the end of the ice age. The Lithuanian Hound though, a breed that came from Russia is considered to be the newest among the Russian scenthounds. A preference for hunting with hounds was adapted by the Lithuanian hunters from the French nobles they have hunted with during the 16th century. Lithuanian hunters utilized their local hounds for big game hunting. In an attempt to recreate the Curlandish Hound, these hunters crossed their hounds with Bloodhounds, Beagles, Polish Hounds and Russian Hounds. The Lithuanian Hound was born. The Lithuanian Hound has several breeds of SSoutstanding hounds for its ancestors thus it would not be surprising for the breed to manifest the excellent hunting abilities of its forebears. This breed is highly valued by Lithuanian hunters. The dog is considered to be as valuable as gold. The breed became very popular in Lithuania but after the Second World War, the breed is already close to extinction.

Efforts to restore the breed were started in 1957. In 1966, a provisional breed standard was made for the Lithuanian Hound. Restoration efforts had a major setback when a lot of dogs were killed by boars during the 1976-77 hunting season. A special kennel devoted to raising Lithuanian Hounds was created by the Lithuanian Cynological Council. In 1981, the first exhibition for the breed was organized. The exhibition was attended by 62 dogs. The Lithuanian Hound is a hardy hunter. This breed is an integral part of Lithuanias history. Efforts to have the breed recognized by FCI are underway.