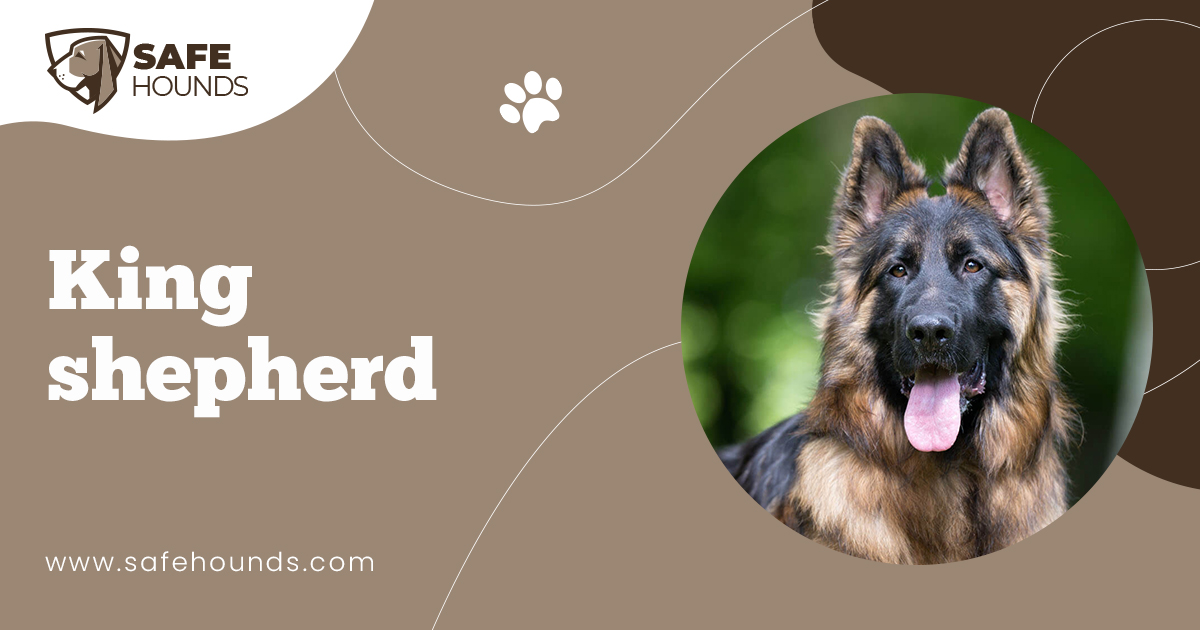 Three different breeds of dogs were used by American breeders to create a large and impressive dog that perfectly fits the name King. Through selective breeding, the King Shepherd was developed in the 1990s in the East Coast. Standing at 25 to 29 inches and with a maximum weight of 150 pounds, this breed that sports a richly colored coat would not fail to generate admiring comments from onlookers. The King Shepherd is a working breed. The admirable appearance that never fails to turn heads is just the icing on the cake as this dog is highly valued for its working abilities. Adaptability is a very vital element of this breeds character. For its size, this dog is very athletic and exhibits immense stamina and endurance. The breed is noted for its high level of intelligence. A King Shepherd is a tireless search and rescue dog. It has saved and rescued distressed people from fires, avalanches and from other search and rescue operations. These courageous dogs have been the dependable helpers of the police force. Vigilant and protective by nature, this massive dog would always exhibit an intimidating appearance. However, a King Shepherd is an even tempered breed, one that bonds closely with its family. Eager to please its master, a King Shepherd adapts well to training. A King Shepherd was primarily developed to be a working dog. This breed is a highly valued sheep herder. However because of its even temperament, a lot of these dogs are kept as family companions. This breed though is not for everyone not for a master that does not have the capability to clearly define the lines between the dog and the humans.

A King Shepherd will never fail to make heads turn for this is one impressive breed. The dog is a trotter. Its diagonal gait and harmonious easy movements that effortlessly cover a lot of ground will never fail to gain the dog second looks. This large breed of working dog has a slightly long robust, muscular and heavy boned build. A King Shepherd resembles a GSD although the immense and well defined head is a most distinct characteristic that differentiates this breed from its GSD ancestor. Moderately wide between the eyes, the massive head has a slightly rounded forehead. Moderately curved cheeks are not too full and form a V when seen from the top. Powerful muzzle that is proportionate to the size of the head has a well defined stop. Set on high, the pointed ears are erect and carried slightly forward. Medium sized, the ears are thick, fine and moderate wide at the base. Almond shaped medium sized eyes are set rather aslant and give an intelligent and lively expression. Eye colors vary from very light to very dark shades of brown to almost black. Black is the only acceptable nose color for this breed although during the winter months, a snow nose or a lighter streaked nose would be acceptable. This breed has strongly developed jaws, firmly fitted lips and strongly developed teeth that meet in a scissor bite.

Medium in length, the rounded neck joins the head with sharp angles. Well developed neck muscles gracefully fit the body without showing throatiness. Neck is normally above the horizontal of the topline but carried erect when the dog is alert. The full deep chest has a brisket that reached the level of the elbows. Ribs are well sprung. Well plumed tail reaches the level of the hocks and carried low when the dog is at rest. An excited King raises its curved tail without going beyond the vertical. A King Shepherd can either be coarse haired or long haired. The coarse haired variety has a very dense top coat that is straight and lies close to the body. The head and front of the legs are covered with shorter hair. The long haired variety sports long and dense trousers and tufts at the ears. Fringes form on the elbow and pastern. The tail of this variety is densely feathered. The coat varies in color. The richer the color the more it is preferred. The coat can be sable, bicolored (black with cream, red or tan markings). This breed can have a solid white or solid black coat. One that has a black saddle with silver, cream, gold red or tan marking would be a very impressive looking dog.

A German Shepherd is considered to be one of the most popular breeds of dog in the world. This is due to the admirable working qualities and the well balanced temperament of the dog. The King Shepherd has mainly descended from German Shepherd thus it is not surprising for the King to have the admirable qualities of its parent breed. King Shepherds are very handsome dogs but they are also very loving and loyal to their family. As mentioned this breed trains easily because they have the inherent canine eagerness to please. Protective by nature, the dog does not have to be trained in this line as the dog would courageously and cleverly defend its charges. The dog is fearless and aloof with strangers but it does not usually exhibit a hostile behavior. The dog is friendly, patient and playful with the children. They can even be depended on to act as nannies. This breed tolerates other dogs as well. The King Shepherd is not recommended for apartment living not only because of the size but also because of the breeds love for strenuous activities. The dog would be happiest in a home with a large yard. This kind of living arrangement would benefit the dog owner as well because he would not have to ensure that the dog is properly exercised. With the space provided, the dog can take care of it own exercise requirements.

The King Shepherd is generally not prone to genetic health concerns. Breeders have made sure that the genetic health concerns of the German Shepherd are outbreed from the King Shepherd. This fairly healthy breed has about 11 years life expectancy. About two hours exercise daily is necessary to keep the dog physically and mentally fit. This breed is not a fussy eater. The dog would need about three to four cups of meat based dry dog food daily. Both the long haired and the coarse haired variety would need moderate amount of grooming. This breed shed but a five minute grooming session done twice a week would be sufficient to maintain the good condition of the coat. Regular coat brushing will also ensure that the natural oils that moisturize the coat are properly distributed. The dog should be bathed only when necessary.

The King Shepherd is a fairly new breed having been developed only in the 1990s in the East Coast. American breeders are behind the development of this powerful and rugged though impressive looking dog. The main objective of the breeding program is to develop a superior breed of dog that would have the admirable qualities of a family companion and at the same time would be utilized as a protector. The dog has to have a high level of intelligence and trainability as the dog will be utilized as guide dog, police dog and search and rescue dog. A King Shepherd is a large dog that looks a lot like a German Shepherd Dog. Actually, the resemblance is not surprising as Shelley Watts Cross and David Turkheimer have used A GSD along with two other breeds of flock guardians to develop this breed. The German Shepherd Dog though is the main ingredient in the recipe that developed the King Shepherd. What Shelly Watts Cross and David Turheimer did was to cross an American bred German Shepherd with Alaskan Malamutes and Great Pyrenees that were crossed with European bred German Shepherd Dogs.

True enough, the breed that was developed is an extremely intelligent and easy to train breed. The dogs are very protective and they also possess the affectionate, loyal and docile temperament of an ideal family companion. The King shepherd is a large breed larger that a GSD, The dog is often referred to as a king sized German Shepherd. Eventually, the breed was acknowledged under the name King Shepherd.

The King Shepherd is a developing breed thus it is as yet unrecognized by AKC. The King Shepherd is classified as a rare breed as developers are still in the process of refining the breed. In 1995, the official breed club was formed. The American King Shepherd Club, Inc. (AKSC) has reformed the breed standard. Other breeds were also introduced to strengthen and to build up the breed making it distinct in conformation and character from the AKC recognized German Shepherd. Puppies produced from the breeds used in the King Shepherd breeding programs were registered by the AKSC. Unique names were given to the dog and individual registration numbers were issued. Some rare breed associations accept the King Shepherds and allow the dogs to compete in show and obedience competitions.