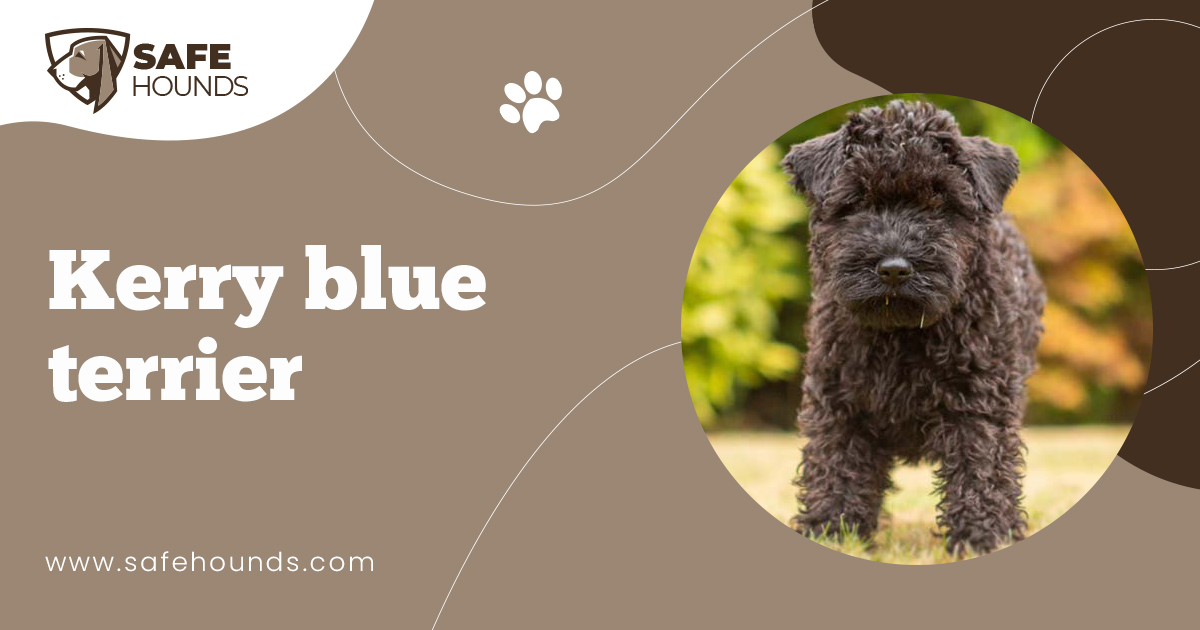 The Kerry Blue can make a good watchdog for your house. They do not bark constantly, but will alarm you if you have someone knocking at your door or if someone comes in uninvited. After they see their owner is fine with whoever is around, then they will be ready to play with them.

The Kerry Blue Terrier comes to America from Ireland. They come from an area known as Kerry. This is partly where they got their name. The other part of their names comes from that fact of their blue colored coat. Therefore, this is how the Kerry blue terrier came to be called such.

The Kerry Blue Terrier is a medium sized dog that is very muscular and well built. This dogs form stays true to the Terrier breeds. With the show dogs, their eyebrows reach all the way to the bridge of their nose. Their V shaped ears folder over to the outside of the corner of their eyes. Their eyes are a dark enthusiastic color. Their nose is a black color. On the back legs, the dewclaws are removed. With this terrier breed, the tail is docked to where it stands up straight. They say for dog shows that the straighter the tail, the better. This breed has straight legs with a very dominant bone formation.

The Kerry Blue Terrier coat changes colors, as it grows older. The way the color changes is it begins as black which changes to very dark shades of blue, then on to tinges of brown, and last to different shades of blue gray. Now for when the dogs are older their correct color should be a slate blue to a light gray color. They should reach their full color around 18 months of age. On their head, feet, tail, and muzzle can have black or dark blue prints, which are accepted.

The Kerry Blue Terrier is a playful, loving, and loyal dog. They can be a good watchdog because they will give a warning bark if someone is at the door. They will keep up warning you about the stranger until you let them know the person is allowed in your home or is not a danger. this breed will not attack anyone unless they are really provoked enough. This breed of dog needs to be well socialized when it is young with people and other dogs for it to grow up well behaved around people.

When training these dogs you will need to make sure, the challenges for this dog are fun. If they get too bored, they will become stubborn with the training and not listen very well. They love to play fetch and other similar games when outside.

For this dog, apartment life is good. This breed is active indoors and all it really needs is a small yard to play in. This is also a good breed of dog to have around kids. Some kids can be rough and love to tumble around with dogs, and this dog will love it as well. With their well-built bodies, they do not tend to get injured easily.

The Kerry Blue Terrier is a breed that needs to be groomed about every 6 weeks. The Kerry should be groomed similar to that of the soft-coated Wheaton. Now for brushing, this needs to be done at least once a week. The Kerry Blue sheds little hair and when they are wet they odorless. Normal bathing of this breed is fine, as their skin will not dry out such as is seen with other breeds of dogs. Keep them bathed and combed every week.

You should ensure that all the hair is pulled out of the ear canal. Having built up hair in their ears with wax and dirt can cause ear infections with this breed very easily. Cleaning their beard is also important as food and dirt can build up in their coat. It has been said that this breed of dog is good for people who have allergic reaction to dogs as owners do not have any type of reactions with a Kerry Blue Terrier in the home.

Being the republic of Irelands national Dog, the Kerry Blue Terrier looks as regal as Royalty. The origin of the Kerry Blue is believed to be from Southern Ireland where they were farm dogs along with many other dogs. The Kerry Blue was not only great to have around the farm, but many were used as hunting dogs.

Some even think they came from a mix of Irish Water Spaniel and the poodle since they share so many characteristics such as their love for water, they all love to hunt, and the coats are quit similar.

In 1588, the Spanish and Portuguese formed the Armada and sailed to English soil, but Spanish galleons sank and others were hit by strong winds from many gales and shipwrecks. Therefore, the survivors had to swim to shore. This was an easy task for the dogs since they were used before to send messages from ship to ship out at sea.

In 1922, the breeds name Kerry Blue was established and they were no longer known as Irish Blue Terrier or Blue Terrier. They were recognized in 1920 by the British Kennel.

These dogs were bred for certain needs early on such as the herding and hunting, but they also were very good at watching over the children as they slept. So from then on, they were also used for guards and before long, the police started to use them as sniffing dogs because they had a keen sense of smell.

If you plan on showing your Kerry Blue terrier, you must not scissor or trim him. The judges want to see a rough look to your dog. They do not need washing more than once a month and you will want to brush his curls not comb them. They judges look for quit a lot and expect to see a natural look to your dog not a fake one.

These dogs will become your faithful companion. They have a natural sense of doing things and in training, they will usually take to doing it quickly themselves. In older generations, the Kerry Blue Terriers were used on farms for digging badgers out of their holes. They were taught not to wait for a treat every time they did what was expected of them, just a good boy with a gentle pat was enough. Today, in training, they expect no more.