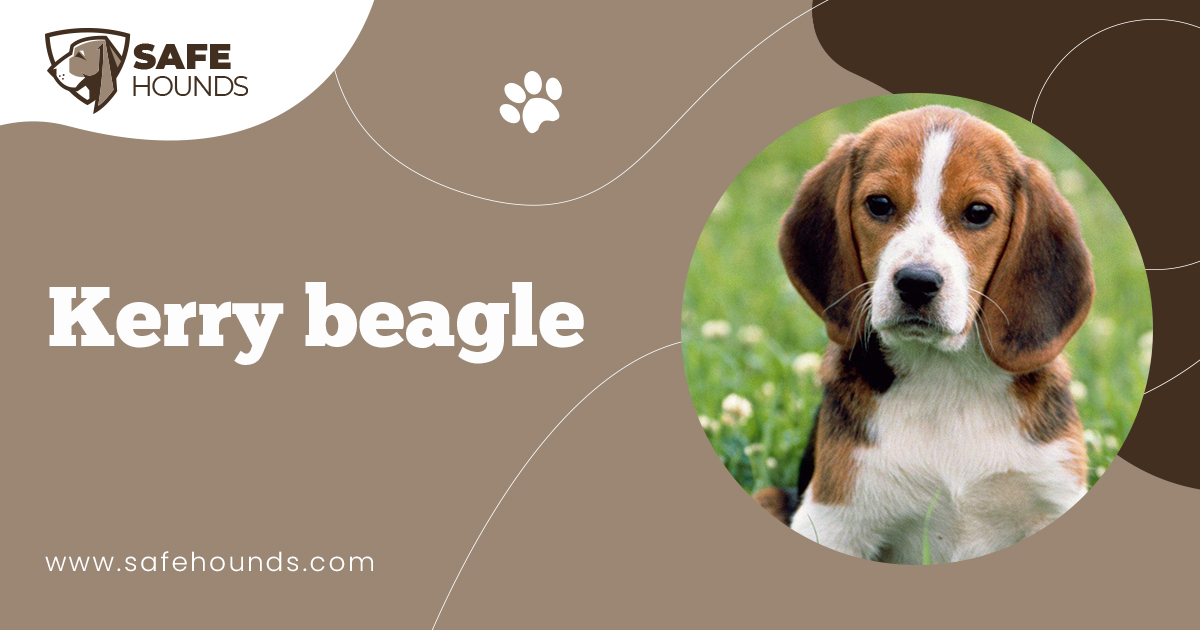 The Kerry Beagle has been a beagle for centuries in spite of the fact that this breed has never been as small as a Beagle. This breed is believed to have existed during the 1500s and during that time, the Kerry Beagle is even a larger breed. Next to the Irish Wolfhound, the Kerry Beagle is considered to be the oldest breed of Irish dog. This breed is believed to have arrived to Ireland with the Celts. In the early Celtic settlements, the breed was refined through the crossing with Southern and French hounds.

As mentioned, the breed is larger than the modern day Beagle. A Kerry Beagle measures from 22 to 24 inches at the withers and weighs up to 60 pounds. This dashing hounds well built appearance is made more impressive by the medium length close lying coat that vary from black and tan, blue mottled or black, tan and white color.

During the early years of this breeds existence, it was used to hunt stag and other large game. A Kerry Beagle is a scenthound, one that has an excellent scenting ability. The dog was commonly hunted with larger hounds as the Kerry Beagle will track the game with its excellent nose and the larger hounds will be brought in to do the actual hunting. Presently, a Kerry Beagle is used in drag trials and in the exciting hunting of hare on foot. In Ireland, hare hunting is basically done for the enjoyment rather than for the chance of bagging a hare. In fact catching a hare is a rare occurrence as the hunt master usually calls off the hounds before the hare is distressed. What provides the excitement is the chance to watch the packs of Kerry Beagles scour the nooks and crevices of the mountainside and to hear the echoing excited barks of the dogs. In Ireland, the Kerry Beagle is commonly called Pocadan because of its outstanding hunting abilities.

Packs of Kerry Beagle are regularly hunted in rural England. These dogs are often seen in drag hunting competitions as well. A Kerry Beagle is a muscular well built breed of dog. The head is of moderate length but the skull is broad. The dog has a rather low forehead, strong eyebrows and rather raised though not well filled cheeks. Large eyes that vary from bright yellow to a deeper brownish yellow color have a bright and intelligent expression. Slightly tapering nose has large nostrils. Large pendulous ears are set on low and hang on the side of the head to fall below the neck. The upper lip gets fuller towards the corner of the mouth. This breed has strong and level teeth. Slightly arched neck is thick and covered with a rather loose skin that creates a dewlap.

A Kerry Beagle is a fairly thickset and muscular breed. The back is moderate in length but it is very muscular. The slightly arched loin is broad and muscular. The broad shoulders give the dog a string well built stance. The chest is rather narrow but deep enough to provide ample room for the heart and lungs. Long tail that is evenly covered with hair is thick at the root and carried curved upwards. This breed of scenthound was developed for speed and endurance. This dog has well muscled and strong boned legs. A Kerry Beagle has a smooth close lying coat that is quite hard to the touch. Black and tan is the most common coat color of a Kerry Beagle. Tan and white, tricolored (black, tan and white) and blue mottled coats are also seen.

The Kerry Beagle was primarily developed to hunt. This breed is a serious and tireless hunter. The breed though possesses a well balanced temperament that makes it a wonderful home companion. The Kerry Beagle forms a strong bond with its master and makes a wonderful and patient companion and playmate of the children. This dog is hunted in packs thus it is accustomed to being with other dogs. An aggressive behavior towards other dogs can not be seen in this breed. A Kerry Beagle can live in an apartment as long as the exercise requirement of the dog is met. However, it would take a lot of work for the owner to ensure that the dog is exercised as this breed would need to be walked two to three times daily. This hunting breed would thrive well in a home in the country where ample space where the dog can have free runs will be provided.

The Kerry Beagle is a short coated breed thus it would not require extensive grooming. Brushing the coat weekly would be enough to distribute the natural oils and to maintain the good condition of the coat. Bathing must be on a necessary basis only so that stripping the oils from the skin will be prevented.

Several breeds of dogs call the Emerald Isle home. These are the Glen of Imaal Terrier, Irish Terrier, Kerry Blue Terrier, Wheaten Terrier, Irish Water Spaniel, Irish Red and White Setter, Irish Setter, Irish Wolfhound and the Kerry Beagle. These dog breeds that are generally used to herd or to hunt are highly valued by the Irish people. In fact dog owners that are living outside their native land hold an annual Irish fair with the parade of Irish dogs as one of the highlights. The Irish Wolfhound is believed to be the oldest Irish breed followed by the Kerry Beagle. The Kerry Beagle has walked on Irish soil since the 1500s. The origin of the breed is rather obscure. However, it was thought that this breed has descended from the Old Celtic Hounds. During the ancient times, Celtic Hounds are highly valued by the royalty and by the warriors. These dogs are portrayed in Celtic jewelries and mentioned in Irish legends and myths. The Kerry Beagle is believed to have particularly descended from the Gadhar, a very ancient dog breed that was mentioned in ancient Irish writings. The Kerry Beagle has existed in the first Celtic settlements and used to hunt with larger breeds of hounds. The Kerry Beagle is a scenthound that was originally used to hunt stag and hares.

Modern day Kerry Beagles answer to the Irish name pocadan. The word beagle could have been derived from the French word beguile which means open throat or from the Gaelic word beag which means little. The word could have come from the German word begel that means to scold. Interestingly, it is not known why this breed of scenthound that was in existence in Ireland during the Celtic era was given the beagle name. The Kerry Beagle is 22 to 24 inches in height and weighs up to 60 pounds. These dogs are much larger during the earlier times making them much bigger than the modern day Beagle.

This bred that was developed from the ancient Celtic hounds was probably refined through crosses with French hounds and Southern hounds to create an excellent hunting hound. However by 18th to 19th century, breed popularity started to wane. In 1847, the great hunger in Ireland has seriously decimated the breed. Only the kennel in County Limerick owned by the Ryan family remained. The Braque de lAriege, a breed of French hound was used to restore the breed. Breed population steadily grew. The dogs are now hunted in rural Ireland. Immigrants to other countries have brought with them this outstanding hunting breed. In USA, the Kerry Beagle is noted to have influenced the development of the American Foxhound and the American Black and Tan Coonhound. The modern day Beagle has descended from the Harrier, the Foxhound and from the Kerry Beagle. The Beagles excellent scenting ability is attributed to the genes contributed by the Kerry Beagle.