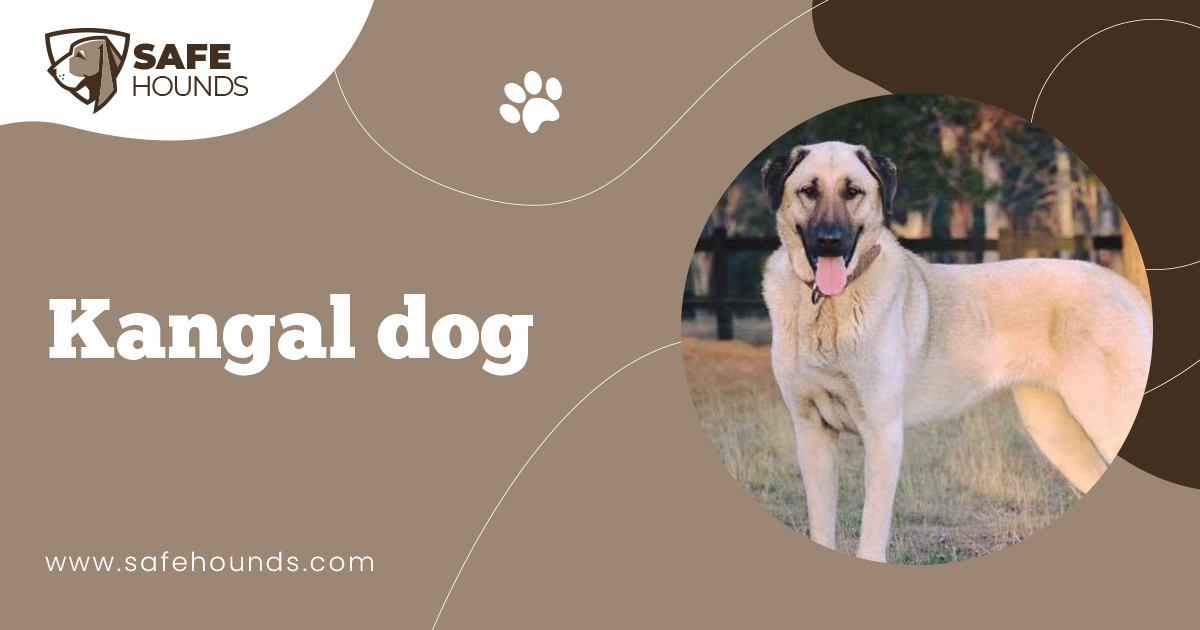 Sheep constantly need the protection of livestock guardian dogs. Wolves, jackals and other predators would always attack if the flock is unprotected. At first glance, it would appear that no flock guardian is in attendance. But closer inspection will reveal a dog that appears to be a sheep because of the pale yellow coat coloring. What sets it apart from the other animals is the iron spiked collar it is wearing. The livestock guardian is the famed Kangal Dog. This mastiff type breed is considered to be a contemporary national treasure of Turkey as the breed was named the countrys national dog.

The Kangal Dog was developed in the Kangal town in the Sivas province of Turkey. The breed is highly valued in its country of origin as it is a dependable protector of livestock. Sheep rearing forms a big part of the countrys economy and Turkish shepherds consider the dog as a very valuable asset. The Kangal dog is a massive and impressive breed. Karabash which means black head is another name given to this breed because of the black mask that is a distinct characteristic of the breed. The weatherproof double coat and the rather bushy tail that is curled at the tip gives this breed an elegant appearance. A Kangal dogs ears are usually cropped at the age of few weeks. The dog is made to wear a spiked collar to protect the throat when the dog is attacked by predators. The long sharp spikes can injure uncropped ears and cause infections. Moreover, ear cropping is done to give the dog a fierce and intimidating look. It is also believed that cropping the ears will make the dogs hear better thus enhancing their guarding abilities.

The Kangal Dogs conformation was developed through years of protecting the livestock from predators. This is a massive, well boned and powerful breed. Slightly longer than tall, the dogs well balanced proportions give it an awe inspiring stance. The dog has a large mesocephalic head that is proportionate to the size of the body. A male Kangal dogs head appears to be similar to that of a lions. The narrower head of a female gives the dog an elegant appearance. A black mask that covers the nose and the mouth is a distinct characteristic of the breed. Deeply set, medium sized and oval shaped eyes have an intelligent and trustworthy expression. Eye colors range from honey yellow to brown. The muzzle is completely black. Prominent nose has large nostrils. Strong upper and lower jaws and the black pendulous lips enclose teeth that meet in a scissor bite. Ears are usually cropped but uncropped ears are medium in size, triangular in shape and have rounded tips. Ear color is usually black to complement the black mask.

A Kangal Dog has a well proportioned strong body that exudes elegance. From the shoulder, the backline flows gently to end slightly arched to the rump. Chest that reaches the level of the elbows has substantial ribs. The abdomen is slightly tucked up. The long tail that reaches the hocks typically forms a single or double curl and carried in line with the spine. The double coats allow the dog to stay outdoors in all weather conditions. The short close lying coat has a dense and soft undercoat and a slightly longer smooth hair that is rather rough to the touch. The wooly undercoat serves as insulation and protects the dog from the severe winters and extremely hot summers of Anatolia. Pale yellow, pale grey and pale brown are the most common coat colors. Solid coat colors are desired although some specimens may have white markings in the chest, knees and feet.

The Kangal Dog is first and foremost a guardian dog. As such the dog is expected to be very protective, alert and highly territorial. Islam is predominant in Turkey. As Muslims believe that dogs are dirty animals, they are not allowed to enter the house. However, because the dogs are allowed to stay around human habitation, they have developed a strong bond with their people. This close bond made the dog suitable home companions. The dog has a calm temperament and noted to be very good with children. This breed though is not for everyone. Apart from the massive size of the dog, it is also noted for being a strong minded breed. A large room would be necessary for this dog. Apartment living is definitely out for this breed. An owner must realize that the dog would need regular mental and physical exercises as a bored Kangal dog would not only be a hard to handle pet but will also be a very destructive one. These dogs do not only bark they roar! The noise the dog will create will surely irritate neighbors. Unless the home is secured with a 6 foot fence, the dog should not be off leashed as it will be very dangerous to other dogs and other animals.

The Kangal Dog requires very little grooming. The straight coat repels rain and snow. Mud will fall off once dried thus the dog would not need extensive grooming. Working dogs are valued for their working abilities and not for their appearance. Shepherds that own this breed may not take the trouble to brush the dogs coat as these livestock guardians stay with the flocks most of the time. Nonetheless, the dog would benefit from occasional brushing when the dog is not shedding. Kangal Dogs are heavy shedders. When shedding, the dog has to be brushed daily to remove dead hair. Working dogs need not be provided with opportunities to exercise as the dogs constantly patrol the property while guarding the flock. Kangal dogs that are kept as family dogs would need sufficient amounts of mental and physical exercises otherwise the dog will be very hard to handle.

Turkey is famous for its classical history. For centuries, this country with its busy modern ports and thriving industries has been enjoying brisk international trade. The countrys domed palaces, minarets and picturesque markets have been drawing flocks of tourists. The heartland of Turkey though is no place for a tourist. The inhospitable steppes and plateaus are not suitable for growing crops. Grazing is too sparse for cattle so that sheep rearing is the mainstay of village economy. Turkey is famous for its carpets and for its textile industry. This country has over 36 million sheep. Turkish shepherds highly depend on coban kopekleri for their livelihood. Coban Kopekleri is the umbrella term for shepherd dogs. The Kangal Dog is one of these breeds that protect the flocks of sheep from wolves, jackals, eagles, bears and other predators. These dogs are often seen escorting the sheep to a water source and back again to the pasture. These are very dependable livestock guardian dogs as oftentimes they work even without human supervision.

The Kangal Dog is believed to have originated in the Sivas Province of Central Turkey. Breed name was taken from the Kangal District where the breed was developed. The Kangal town was named after the Kangal family who are renowned landowners and breeders of horses and massive sheep guarding dogs. The Kangal Dog is an ancient breed believed to have descended from mastiff dogs that were depicted in Assyrian art. Dogs that resemble the Kangal Dog were seen in sculptures depicting the hunting parties of Ashurbanipal, the Assyrian king. The massive and powerful breed was described by Herodotus as the Babylonians Indian Hounds. It was further believed that Kangal ancestors have migrated from Central Asia. The dogs have probably accompanied the Oghuz Turks from Central Asia when they flee from Genghis Khan to Anatolia during the 11th century. This belief was supported by the existence of dogs similar to the Turkish herding dogs in the villages along the historic route.

More than 30 breeds of livestock guardians are found in Turkey. These breeds are considered vital to the countrys economy. However, the Kangal Dog is the most famous. This highly esteemed dog was named the national dog of Turkey. The breed was featured twice in Turkish postage stamps. The Turkish government has established and sponsored breeding programs to protect and ensure the purity of this treasured breed. In Turkey, the Kangal dog is the only dog breed capable of killing a wolf. It is not surprising why the breed is a highly valued livestock guardian dog. In the 1980s when the popularity of the breed is at its peak, the Turkish army has tried to train the breed for the tasks that are done by German Shepherds and Doberman Pinschers. However, because of the headstrong nature of the Kangal dog, the project was eventually abandoned. This breed is considered as a part of Turkeys national heritage. Exportation of the breed to non-Turkish nationals is presently prohibited by the Turkish government.