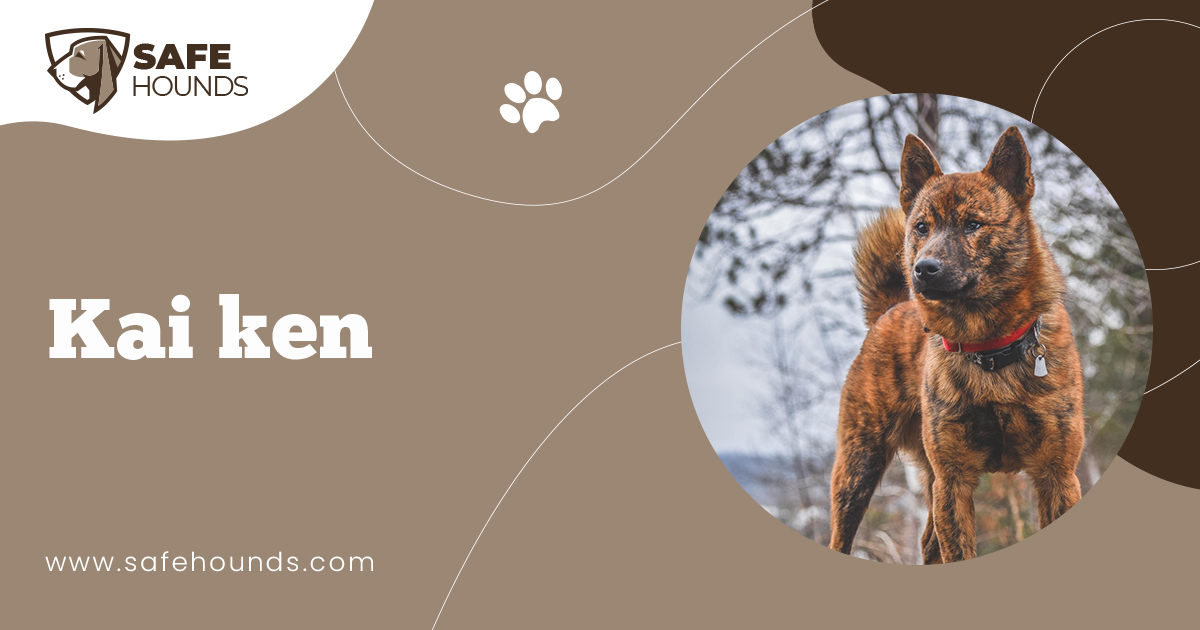 Kai Ken the dog that belongs to the Spitz family was classified as a national treasure in Japan in 1934, its country of origin. Up to this day, the Kai Ken is still a very rare breed so much so that even in Japan, a lot of people havent heard about this ancient breed. Among the six native Spitz type dog of Japan, the Kai Ken is believed to be the purest, never been cross breed. It is also the Shika Inu (medium sized) dog.

This dog is also known as the Kai Tora-Ken, Kai Inu, Tora Inu and of course the more popular Tora dog. Tora Dog means Tiger dog not only because of the brindle or the striped coat that resembles that of a Tiger but also because of the dogs legendary toughness, energy, ferociousness not to mention its excellent hunting prowess. Some would say that Tiger Dog is a very apt name for this Shika Inu dog as it has the tenacity and the wiliness typical to a tiger. Once a prey is sighted the Kai Ken will never pass the opportunity to hunt with or without the master.

Although considered to be medium sized, the Kai Ken has a strong and sturdily built body. The well developed muscles and the strong limbs and hocks enable this hunting dog to easily traverse rough terrain in the mountainous regions of Japan.

A Kai Ken was primarily developed as a ferocious hunting dog that can easily take wild boar and deer. These days, most of the Kai Kens are no longer used as hunting dogs. The Tora Dog is now given another role that of a loyal companion and an excellent guard dog. The dogs that were once free to roam the mountains are now housebound and seem to be enjoying every minute of being a family pet. A Kai Ken is one loyal and affectionate pet, one that would be content to lie on the masters lap if the master is resting and one that would be the masters shadow if the master is up and about.

A Kai Ken is a fairly healthy breed. Unlike other breeds a Kai Ken does not have any known congenital and hereditary diseases. The dog has an aproximate life expectancy of 12 to 15 plus years. A Kai Ken though is not for everyone more so for a novice first time dog owner. Although no longer utilized as hunting dogs Kai Kens still retain its natural characteristics. These dogs are noble, free spirited and used to living with a pack. As such the dog would need a male alpha to look up to. The owner should be assertive, should have a firm hand to deal with this intelligent but at times willful dog.

To be able to traverse the stiff and rough mountainous paths the Kai Ken would need to have a compact well muscled body as well as sturdy forequarters, hindquarters and feet. Well arched and tightly closed toes have thick elastic pads and dark colored nails. The dogs head is medium sized, edge shaped with a broad forehead and a pronounced abrupt stop. The medium length muzzle is pointed and slightly thick. The lips are tight, cheeks are well developed. Strong teeth meet in a scissors bite. The rather small eyes are triangular in shape and dark brown in color. Ears are triangular, pricked and inclined to lean forward.

The dog has a rather short back, broad and thickly muscled loins, tucked up belly, well sprung ribs and a deep chest that reach the level of the dogs elbows. The thick tail that is set on high would almost reach the hock. The tail may be curled or carried not unlike a sickle over the back of the dog. A Kai Kens height is from 18 to 23 inches measured from the withers and would weigh from 25 to 40 pounds. Some dogs though would grow as big as 60 pounds. A Kai Ken has a straight outer coat that is rough to the touch, the under coat is dense and very soft. The hair on the tail is quite long and gives the tail a plume like appearance. Coat color range from red brindle to black brindle. Puppies may be born with solid coat color but coat would turn to brindle as the puppy matures. The brindle on the coat adds to the hunting ability as the dog can easily blend in with the surrounding vegetation and with the mountains rocky surfaces. The distinct coloring enables the dog to sneak up on the prey. And most importantly the brindle also hides the dog from other predators.

Kai Kens make wonderful house pets and companions as they form a strong bond with the human family. These dogs are very loyal to their masters. They love unconditionally and would need to be loved in return. Kai Kens would demand constant attention and would love to be included in the activities of the family. These dogs are known to be gentle with children. Puppies would love nothing more than to be cuddled and carried by kids. However, it would not be wise to leave very little kids alone with any breed of dog. Also, kids must be cautioned not to tease the dog. A dog no matter how good tempered may get irritated and could hurt the kids. Kai Kens make good family pets because they can tolerate smaller pets. As Kai Kens are highly intelligent breed it would be quite amusing to see the dog play mind games such as the Stare with other smaller pets of the family.

Present day Kai Kens have developed into excellent guard dogs. As mentioned before these dogs are intelligent. Housebreaking them would be easy. Some Kai Ken owners have attested to the fact that these dogs can be easily trained as guard dogs. A trained Kai Ken would be able to discern a family member from an intruder. Kai Kens are affectionate with the family but they are reserve with strangers. These dogs are not barkers and would only bark to warn the owners of intruders or of unusual circumstances. It would not be uncommon to see a Kai Ken perched on a table always watchful and alert guarding the family.

Due to the dogs nature and origin, obedience training and socialization is necessary. Socialization must be started while the dog is still young. By taking the puppy to public places, it would be exposed to other people, other animal as well as to varied situations. This will prevent the puppy from developing into a shy and fearful dog. Fearful puppies often develop into biting dogs.

These dogs are fairly inactive indoors and as such they would do well in an apartment as long as enough exercise is provided. Owners may take the dog on long walks in the park but these dogs must be kept leashed at all times. Being hunting dog, their prey drive would manifest once they see smaller animals. Given the chance the dog would swim, climb fences and trees to pursue their prey. Well trained Kai Kens may be unleashed in a fenced yard and if the owner is sure that the dog would respond to his commands.

The dog does not really need an elaborate cleaning regimen as the dog is known to clean itself. It does no have an offending doggie smell and bathing should be on a necessary basis only. The coat however would need regular maintenance. The dog has a double layered coat that should be thoroughly brushed.

The Kai Ken is believed to have originated from Kai district of Japan which is now known as the Yaminashi Prefecture. It was speculated that the ancestors of this dog that is also known as the Tora Inu may have existed some 4000 years ago in the Southeast Asia. It was belied that with wild dogs roaming the mountains were domesticated by the Matagi. Matagi were the ancient Japanese hunters that saw the potential of the Kai Ken dogs as excellent hunters. They saw the tenacity of these dogs that would scale rock formations, climb trees and swim rivers in pursuit of their prey. They were able to watch the ferociousness of the dog as it fights and take down bigger wild boars and the swiftness that easily overtakes and corners deer.

These dogs are very rare even in Japan, its country of origin. After the First World War, the number of Kai Kens decreased considerably when the Japanese took to breeding western breeds like the German Shepherd and the Pointer. In the early 1930s Mr. Harao Isogai made a concerted effort to revive the interest for the Japanese native dog by trying to categorize the breed and making an in depth study of the Kai Ken. Interest and attention for the breed was revived. The Japanese were made aware of the outstanding qualities of the dog and in 1934 the breed was assigned to be a Natural Treasure.