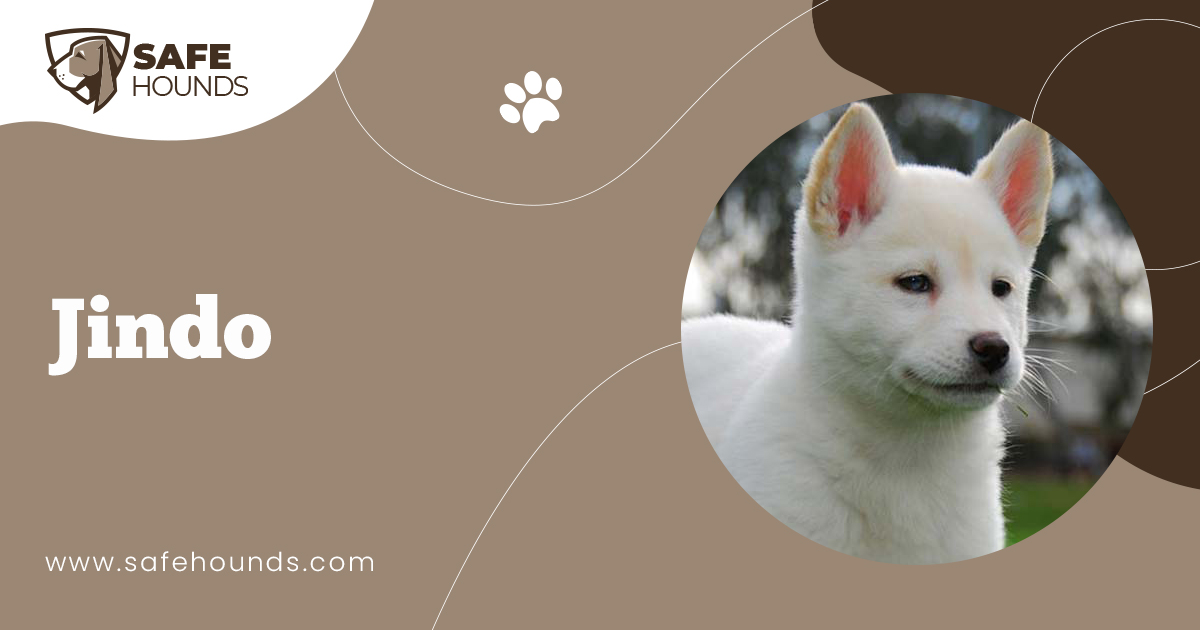 Jindo Island on the southwest region of Korea is historically known as the place where opposing intellectuals are exiled by kings during the Korean dynastic rule. Back in those days being exiled to this island is a fate worst than being sentenced to death. Jindo Island is the home of the Jindo Gae (Dog of Jindo Island), Koreans Natural Monument #53.

A Jindo is a medium size spitz-type dog with a robust body. A standing double coated Jindo gives the impression of strength, agility and alertness. The dog has the lean sleek body of a marathoner. A Jindo has the capability to run extremely long distances. A running Jindo is a wonderful sight to behold because of its swift and effortless gait.

Jindos were primarily used as hunting dogs. This breed has an extraordinary hunting prowess that enables them to trail old scents of raccoon, badger, rabbits, wild boar and deer. A Jindo can hunt extremely dangerous wild game. This dog is one of the three dogs that can hunt the extremely ferocious Siberian Tiger.

Koreans traditionally hunt without using guns. A pack of Jindos would hunt wild game. Hunted smaller game like raccoons and rabbits will be brought by the dog to their master. If a bigger game like boars and deer were hunted, one of the Jindos will return to the master and led him to the site while the other dogs stand guard and wait by the prey. These dogs hunt by themselves. There were many stories about a Jindo leading the master to the location where a game had been taken by the dog.

Jindos are known to recognize more than 30,000 different scents. Because of the extraordinary scenting ability, Jindos were used by the South Korean military in their bases. Being made to recognize the scents of base personnel, the dog can easily detect intruders.

Jindos develop unwavering loyalties to their masters. There was even a misconception that these dogs would recognize no other master than their first owner. Dogs that were sold by their masters and were taken by the new owners away from the Jindo Island were able to return despite the great distance. There were many instances when dogs were seen swimming back to the island. Other dogs were known to jump to the boats that ferry passengers to the island of Jindo. One of these dogs is the famous Baekgu. In 1993, Baekgu, the 7 year old bitch that was raised in Jindo Island was sold and taken by the new owner to the city of Daejeon. Baekgu returned to the island after 7 months, severely emaciated. The dog escaped and was able to traverse the 300 kilometer distance. This story was picked up by the media, was turned into a TV documentary, made into cartoons and became a childrens storybook. Jindo County honored the dog by erecting a statue in 2004.

First and foremost Jindos are hunting dogs and owners who favor Jindos are probably hunters. These hunters would find the dog extremely useful as the dog has the uncanny ability to find and take down prey even on its own. But how well would a Jindo fare in an urban setting?

The impressive and the beautiful appearance of the dog are often times the primary consideration of a Jindo buyer. But because of the fact that these dogs are highly intelligent and known to have a mind of their own, in short hard to train, many Jindos end up abandoned. A lot of Jindos are available for adoption from various animal shelters.

Jindos have two basic body styles – the Gyupgae and the Heutgae. Gyupgae is characterized by a shorter but very muscular body, a shorter loin and a chest depth that is equal to one half of the dogs height measured at the withers. The Heutgae has a longer loin and less depth of chest that gives the dog a slender appearance.

Jindos have medium length coarse hair with a dense undercoat. Coat colors would range from white, fawn, tan, black, grey and brindle. Average height for dogs is 18 to 22 inches and 17 to 21 inches for bitches. Weight of dogs would be 35 to 45 pounds and bitches would weigh from 30 to 40 pounds. Jindos have broad and rounded heads a well developed under jaw, a rounded muzzle that is proportionate to the head. The triangular ears are pointed. Inside of ears are well furred. Ears of Jindo puppies are normally down and would start to stand from 4 to 6 months. It is believed that puppies whose ears would stand much later make exceptionally good hunters.

Dogs eyes that can either be round or almond shaped are angled upward thus giving the dogs face a cheerful and smiling expression. Eye colors can be light brown, red brown or dark red brown. Dogs with reddish eyes are considered to be better hunters. Jindos have two types of tail, the ring tail that is rolled on the dogs back and the straight tail that is carried straight up.

Jindos are clean animals. Some would abhor running water but can be coached into a bath. These dogs can be compared to cats when it comes to cleaning themselves. Jindos have clean habits too. They are known to look for the farthest corner of the yard to relieve themselves.

These are highly active and intelligent dogs that would require constant interaction with the master and with the members of the family. The dogs intelligence and willfulness are oftentimes the cause why these dogs are abandoned. Because Jindos are highly intelligent, they can easily pick commands and tricks. However, an intelligent Jindo will be able to scale even an 8 feet fence by climbing trees or by digging a burrow under the fence. If confined inside the house, the dog can tear up the house in an attempt to get out.

Jindos however make very loyal pets, can be extremely gentle with the children and would tolerate other pets. Jindos are also excellent watchdogs. Because of their uncanny ability to recognize scents, they can easily distinguish family members from strangers and intruders. These dogs can easily discern an owners reaction to threat and would instantly react. These dogs rarely bark especially in familiar environment. The dogs bark would warn the master that all is not well. Jindos make excellent guard dogs because they are finicky eaters. These dogs would not easily take food especially from strangers.

The dog is pretty fastidious and has clean habits, it can be good apartment dweller as long as it is given sufficient exercise. Because of their strong prey drive, a Jindo should be kept on a leash if taken on long walks. A home with a yard however, would be more suitable as the dog will be given ample room to roam. But then again, the dog should not be left alone in the yard for a considerable time. These dogs would need constant interaction with the human family otherwise, the dog can be destructive.

Twice a year the dog sheds heavily. During these times, the coat should be given extra care. Daily brushing must be done to remove dead hair. Dogs may also be given warm baths. Teeth should be brushed daily.

Jindo dogs have naturally evolved with the Korean culture and history. These dogs are very much a part of Korea in the same manner that rice and kimchee are. No official documents were written on where and how the Jindo originated. However, a story that was handed from generation to generation is believed to be the origin of this breed. A scholar who is pursuing his enlightened path by communing with nature ascends the mountain in the Jindo Island in the company of a red Korean bitch. Along the way to the mountains the bitch mated with a Korean wolf and three puppies resulted. The red, black and white puppies were the ancestors of the Jindo dogs.

Jindo Island in Southwest Korea is a pretty isolated island. For centuries, the Jindo dog is only available in the island. In the early 1930s, during the Japanese occupation, Jindo dogs were noticed by Mori, a Japanese professor who recommended that the dog be included to the list of Natural Monuments. From then on, the breed was introduced to Japan and to the rest of the western world. When the Japanese imperial army ordered that all Korean dogs be slaughtered and the coats be made into fur coats for the soldiers fighting in Manchuria, only the Jindos were spared. Jindos are now protected by the Cultural Properties Protection Act and in 1962 the Jindo was designated by the Korean government as the 53rd Natural Monument. During the 1988 Olympic Games that were held in Seoul, Korea, the Jindo dog was seen marching in the opening ceremonies.