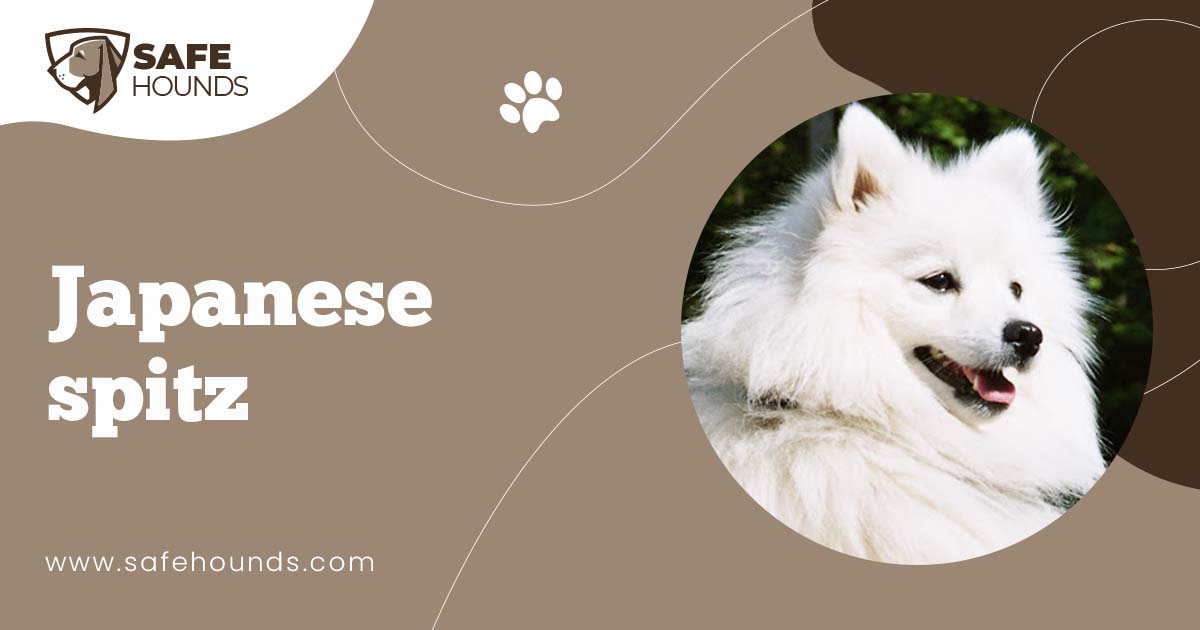 The Japanese Spitz is a popular breed not only in the country of its origin, but in even as far as Europe, Russia and North America. This intelligent, cheerful and lively dog is known for its thick and pure white undercoat. The body, including its tail, shoulders and neck area is covered with long white hair, while the bottom half of the legs have relatively shorter hair. The ears are small and pointed upwards and the eyes are dark and oval in shape with white eyelashes on it. The head of the Japanese Spitz is wedge-shaped similar to its ancestor breeds.

The Japanese Spitz is basically a product of cross breeding several other dog breeds with the purpose of bringing up a small strain of dog with a pure white coat. Ancestors of this dog may include the American Eskimo, German Spitz, Siberian Samoyed and the Russian Spitz. The result was the Japanese Spitz which was successfully bred in the late 19th century. This breed was then introduced to Japan through travelers the natives from Siberia and Manchuria and there it became a popular dog breed.

Due to this dogs intelligence and cuddly appearance, it became popular in Tokyo, Japans capital in the early 1900s. It has been featured in dog shows and has been popularly considered as a house pet and companion. Because of its affectionate and loyal attitude, it easily adapts to its master way of life, as well as the masters family. Like other dogs, they, too thrive for attention and do things to capture a persons interest.

Its love for outdoor activities makes him playful and active, especially when being taught some tricks and testing its intelligence. It is highly tolerant to toddlers and easily gets along with them. They are alert, obedient and tolerant when playing games making them easily trainable. Japanese Spitzes are also good watchdogs and because of their loyalty to their masters, they might just bark at a person insistently unless, otherwise the master tells it to calm down and be quiet.

This intelligent and lively breed stands at a short stature of 12 to 15 inches for male and slightly shorter for female spitzes. They weigh about 13-15 pounds. Japanese spitzes have no markings on their body and live for an average of 9 to 15 years. It has a well rounded and somewhat broad skull with a slightly pointed muzzle, the nose is small and dark in color. Its upward pointing ears are small in size and triangular, it has dark almond shaped eyes with white eyelashes in it.

A Japanese Spitz is popularly known for its very pure white undercoat and long body hair. This dogs long hair may need an additional maintenance on the part of the owner since it should be kept neat and clean. Nevertheless, the furs dryness does not harbor much moisture and microorganisms thus leaving it odorless most of the time. This dogs body has a straight and narrow back covered with a dense white undercoat, free of any markings. Its tail is covered with long white hair and is slightly curved backward.

This highly intelligent dog has straight forelegs and fairly muscular hind legs because they are also into sporty activities and have a good stash combustible energy like other breeds. Thus, a daily walk and a regular sprint is excellent for its healthy condition and proper functioning.

The Japanese Spitz is a dog meant to be a companion of its master. It is a highly affectionate pet and is always into catching ones attention. They are good to play with most especially with toddlers because they tolerate children. They are fun loving and wants to hang out with their master and play interactive games which could test their skills and abilities, like playing Frisbee and other retrieving games. In fact, they can play all day long and have fun. They love companionship but can be independent when practiced.

It is a very loyal dog breed and could bark incessantly in order to drive away a person which it deems unsafe for its master. They are also excellent watchdogs and they are easily disturbed by intruders making them bark unrelentingly. Their alertness makes them efficient in the household. Their hostile attitude towards strangers may not stop unless they get used to the person and makes itself familiar with the stranger. In fact, the Japanese Spitz is sometimes referred to as a big dog trapped inside a small dogs body.

The dog should be trained consistently and firmly in order to be taught efficiently and disciplined. It also tolerates the presence of other dogs and animals. It is slightly dominant with the presence of other pets but can be good with them when trained well by the master. It is a must that the master shows strong leadership and dominance over this dog because it may turn the other way around making the dog develop behavioral problems like barking obsessively and becoming endlessly suspicious to persons.

The Japanese Spitz need most care in terms of hygiene and exercise. Hygienic measures should be taken as a priority because of its dense undercoat and long fur. Although the coat fights of moisture and is dry most of the time, the Japanese Spitz fur should be kept clean as always and free from any stray objects which it may acquire by running to and fro. The hair should be combed and brushed regularly to keep it smooth and soft. Bathing may not be done daily, only when in need because it may lead to extensive shedding of hair, skin dryness and irritation. In fact, it is recommended that bathing should be done once in a couple of months. In times when the dog is shedding much hair (which happens about once in a year), it should be brushed with a double rowed and metal teethed comb because it aids in removing loose hairs in the undercoat. In non-shedding seasons, brushing them for about twice a week is enough to keep them free from knots in the undercoat.

Exercise should also be given priority when caring for this type of dog because of its natural outdoor enthusiasm. Japanese spitzes would love daily long walks with their masters, it not only improves their physical being, but also establishes the bond between both individuals. Giving them the chance to sprint a wide and secure area once in a while is also a good idea. Obedience training is also advisable to be performed at a young age because it gives them verbal sensitivity, discipline and adequate sociability to other dogs, persons and adaptability to places.

The history of the Japanese Spitz is not yet clear to many. But it was a known speculation that the Japanese Spitz descended from the Samoyed dogs which may have originated in Europe, Northern Russia and Siberia. The ancestor dogs may include the German Spitz, Russian Spitz, American Eskimo and Siberian Samoyed. These ancestors were cross bred with the purpose of creating a small Samoyed which has pure white coat.

Siberian Samoyeds look very comparable with a Japanese Spitz and only small things differentiate both breeds. These Samoyeds were very vital to the Siberians. They use these dogs for herding, pulling the sled on the snow, and even sleeping on top of them to keep them warm during the night. The German Spitz also has a resemblance with the said breed in its appearance and color. The accuracy of these speculations are not clear because the records were reportedly destroyed during World War II.

This breed soon became popular even outside its native land, in as far as Europe and North America. The year 1950 was the peak of this breeds popularity. Although these times, the breed is not as popular as how it was before, many still love the lively and playful attitude of the Japanese Spitz.