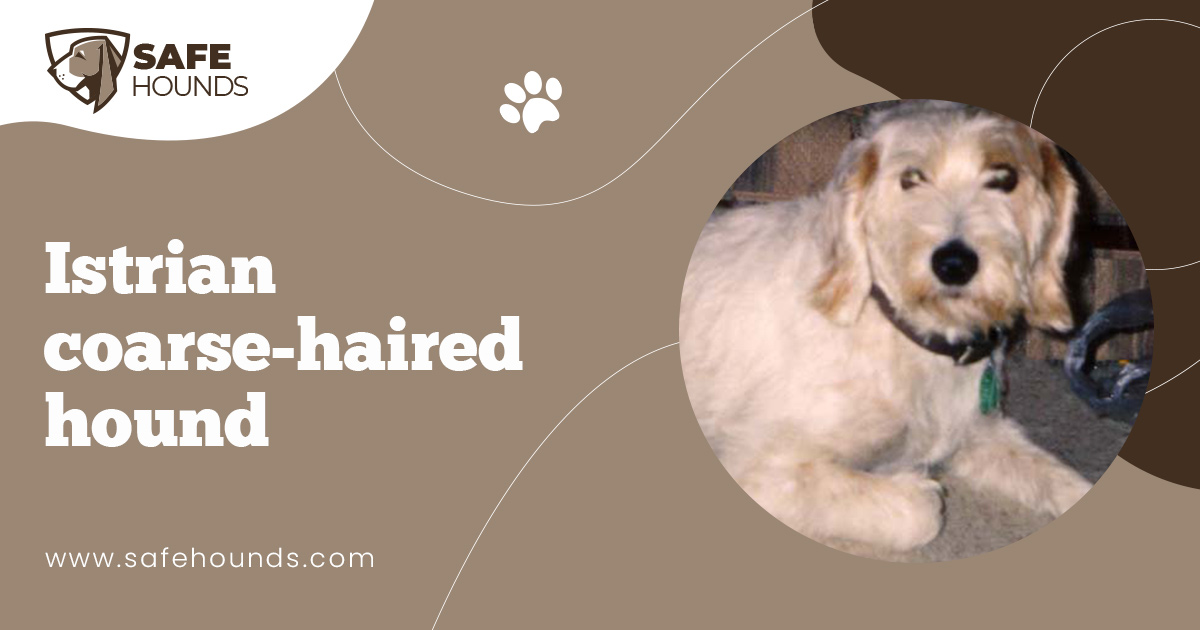 The Istrian Course Haired Hound otherwise known as Istarski Ostrodlaki Gonic was developed during the 1800s in Istria, the westernmost county of Croatia. This breed resulted when Slovenian breeders crossed another Istrian Hound, the Istarski Kratkodlaki Gonic (Istrian Short Haired Hound) with a French Griffon Vendeen. From the Griffon Venden, the Ostrodlaki has inherited the rough and wiry coat. The Kratkodlaki has given the new breed the snow white coat with distinctive orange colored markings. Both ancestors of this breed are noted for the courage and stamina as well as the tenacious ability to follow a prey for hours even over difficult terrain. These qualities were passed on to the Istrian Coarse Haired Hound.

The Istrian Coarse Haired Hound has a solidly built body. The dog shows great endurance and power while hunting. This enthusiastic hunter has always been well regarded by hunters in Istria because of the outstanding abilities this breed shows in hunting hare, fox and wild boar. The dogs stern and gloomy expression belies its lively personality. This dog is alert and active especially when it is hunting. This dog is a scent hound meaning it hunts by scent rather than sight. Similar to the other Istrian hound this breed also has the propensity to bark especially when it is trailing a prey. The deep booming voice of the dog alerts a hunter on foot as to where the dog has found the prey. The Istrian Coarse Haired Hound is an exceptional bloodhound too. For years this dog has been an able tracker of wounded game.

This enthusiastic hunter has an even temperament. Very active while hunting the dog is known to exhibit an entirely different personality inside the home. This tenacious hunter turns into a calm and gentle home companion a pet that forms a strong bond with the master.

The Istrian Course Haired Hound is a medium sized dog with a well built and solidly boned body. The rather long head with a slightly rounded skull is proportionate to the body. The strong rectangular muzzle is broad. This breed has well joined dark pigmented lips, a black or dark pigmented broad nose with well developed nostrils. Shaggy hair that covers the bridge of the nose forms a moustache. This dog has complete dentition that meet in a scissor bite. Large eyes with dark iris pigmentation have a serious and gloomy expression. Long coarse hair forms bushy eyebrows. Rather thin ears that are covered with short hair widen towards the middle and thin to rounded tips. These reasonably long ears hang down close to the cheeks.

An Istrian Coarse Haired Hound has a strong neck that is covered with taut skin. The length of the level and broad back is proportionate to the dogs height. The short, muscled and rounded loin, the broad croup, broad and deep chest that reach the level of the elbows as well as the slightly tucked up belly give the dog an impressive stance. Long and well muscled forequarters are well attached. Thighs are short but very muscular. This dog has well muscled hindquarters. These well developed strong limbs give the dog a very smooth and lively gait. The tail has a strong root and tapers towards the tip. The tail is usually carried low with the lower end slightly curving upwards.

Istrian hounds have almost the same physical features. The only difference lies in the type of hair. The Ostrodlaki also has a more robust appearance than the Karatkodlaki. The Istrian Coarse Haired Hound has a pinkish elastic skin that tautly covers the entire body. This breed has double coats. The 5 to 10 cm long top coat is dull and coarse to the touch. The hair is somewhat straight never wavy or curly. The bristly hair does not lie close to the body. Underneath the longish top coat is the short undercoat that grows thicker in winter. This breed has a snow white coat. Orange colored markings make the dog standout from other white coated breeds. A star shaped orange marking is usually found on the forehead of this breed. Ears are always covered by orange colored hair although an orange speckled ear is an indication that the dog is a pure breed. Orange spots or flecks are present all over the body. The root of the tail is usually covered by orange markings. These spots should be brightly colored not pale nor dark in color as it indicates cross breeding. Some dogs have completely white coats.

The Istarski Ostrodlaki Gonic is an enthusiastic hunter but this dog has an even temperament that makes it a suitable home companion. The Ostrodlaki is lively and energetic while hunting but the dog is calm and docile inside the home. This is one of the breeds that get extremely attached to the human family so much so that they would demand attention. These dogs make wonderful companions and playmates of the children as apart from being lively, they are gentle and tolerant. This friendly dog generally tolerates other dogs. Although care must be taken not to unleash the dog in public areas they have the propensity to chase small furry pets. Socialization and obedience training that is best started while the dog is still young is imperative.

Being working dog, this breed is accustomed to vigorous exercise. These dogs are relatively inactive indoors and would require to be let out, to be taken on long walks to fill their exercise needs. This breed would require large space and for that reason city or apartment living is not suitable for this breed.

The longish coat of this breed would require daily brushing. The Istrian Coarse Haired Hound is a working breed, one that is valued for their hunting capabilities and not for their appearance. Nevertheless, the dog would still need minimal amount of grooming. Ears and eyes must be checked especially if the dog has been on a hunting trip. Frequent bathing will not be necessary as it will remove the weatherproofing of the coat.

Istria has contributed to the world of dog lover two types of hounds – the Istrian Short Haired Hound and the Istrian Coarse Haired Hound. Both hounds are considered to be ancient breeds. While the short haired hound was speculated to have descended from sight hounds and scent hound indigenous to Istria, it is certain that the coarse haired hound was developed by crossing a French Griffon Vendeen with the Istrian Short Haired Hound. The development of this outstanding breed was made in mid 1800s by Slovenian breeders. The Istarski Ostrodlaki Gonic, as the breed is commonly known in its country of origin was first brought to the public eye when a dog was entered in a conformation show in 1866. Although the Istrian Short Haired Scent Hound is the forerunner of the Ostrodlaki, both breeds share the same history. The short haired hound however is more popular. This is due to the fact that written descriptions and illustrations of the newer breed are seldom seen. The coarse haired breed has an untidy appearance that is not appreciated by artists.

The Istrian rough Haired Hound gained recognition when the breed was extensively described by B. Laska in 1896 an in 1905. These descriptions made people aware of the existence of this outstanding breed. These dogs that were then called barbini were sold to other Istrian regions like Buzet and Pazin. Finally, the breed became popular in Croatia. The breed almost became extinct during World War 1. The strife created by the war has caused an enormous reduction of the breeds population. Fortunately, the few survivors that remained are hardy specimens. These remaining dogs became the foundation for the restoration of the breed. The first dogs were entered in the Croatian stud book in 1924. The breed was officially recognized by FCI in 1948. However, it took twenty one years for the breed standard to be written. The first official standard for the Istrian Coarse Haired Hound was published in 1969. Presently, this outstanding breed is still utilized in its native country and its neighboring regions to hunt foxes, hare, rabbits and wild boar.