Is it a fact that dogs acquire toxoplasmosis from cats? 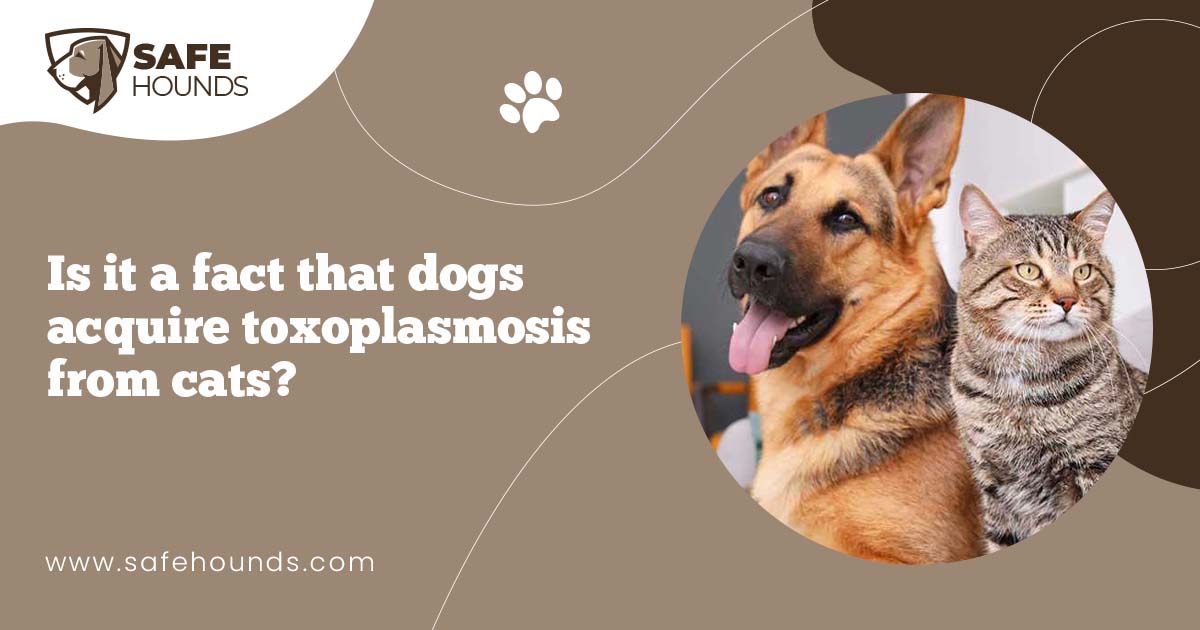 Toxoplasma gondii is the causative agent of toxoplasmosis. Toxoplasmosis is a parasitic disease that infects almost all warm blooded animas. This single celled parasite can cause a zoonotic disease. This means that toxoplasmosis can be transferred from pet dogs and cats to humans. This parasite would oftentimes show no symptoms especially in humans with strong immune systems. In other cases, toxoplasmosis will appear like mild flu. However, this is a very dangerous disease especially on humans with weakened immune systems. Toxoplasma gondii causes encephalitis or inflammation of the brain and other neurological diseases. The parasite affects other vital organs like the heart, liver, ears and eyes as well.

In dogs, toxoplasmosis has unspecific symptoms. Other affected individuals may not show symptoms at all. For dogs with poor immune system, this parasitic disease generally causes fever and inappetance. Infected dog would be lethargic and would lose weight. Other symptoms would depend on the virulence of the disease and on which organ system was affected. This parasite usually affects the brain, the eyes and the lungs of the dog although other organ systems are known to be affected as well. Fever, increased respiratory rate, cough and labored breathing are the symptoms if the respiratory system is affected. If the nervous system is affected, the dog will be lethargic, would show an abnormal head tilt. Because the eyes are affected, the dog will suffer from photophobia. Excessive blinking and squinting occurs when uveitis or the inflammation of the eyes interior occur. Vision may be lost in severe cases. Seizures can result to the death of the pet.

In humans, toxoplasmosis is prevalent in countries where people customarily eat raw or undercooked meat. Animals that are fed raw or undercooked meat have a higher risk of getting toxoplasmosis. Apart from being indiscriminate eaters, dogs are predators. Dogs can contact the disease from eating contaminated food and water and ingesting infected birds and mammals. An unborn pup can be infected through transplacental transmission. The oocysts ingested by a pregnant dog would multiply in the placenta and eventually infect the fetus. However, dogs commonly acquire toxoplasmosis from cats.

The life cycle of the T. goondii is composed of two stages – the asexual and the sexual stage. Both of these phases will require a specific host. Most genera of warm blooded animals and birds can serve as the intermediate host of the T. gondii but the final and definitive host of the parasite is the cat. The T. gondii oocyst excreted by a cat once ingested by a bird or an animal that will serve as an intermediate host will reproduce asexually and invade the cells of the brain and the macrophages of the intestine. Inside the body of the host animal, the sporozoites that will be released will migrate to other parts of the body through the blood stream. The tissues cysts that are formed will be ingested by cats when the bird or the rodent that served as intermediate host is hunted and ingested. Inside the body and intestines of the cat, the cysts will undergo sexual reproduction. Oocysts will be formed and excreted by the cat with the feces. Dogs will be affected when the feces of an infected cat is ingested.

Complete blood count, chest x-rays, fecal examination are methods used to diagnose toxoplasmosis. Clindamycin is the antibiotic that is usually used to treat toxoplasmosis. Anticonvulsant medications are also administered for seizing pets. A pet that is seriously affected by toxoplasmosis can receive intravenous fluids and nutrition. With immediate treatments, about 60% of dogs suffering from toxoplasmosis can recover. This parasitic disease can be prevented by not allowing the dog to eat raw meat. Litter boxes must be cleaned daily and feces disposed of properly to prevent the dog from feasting on the cat feces.