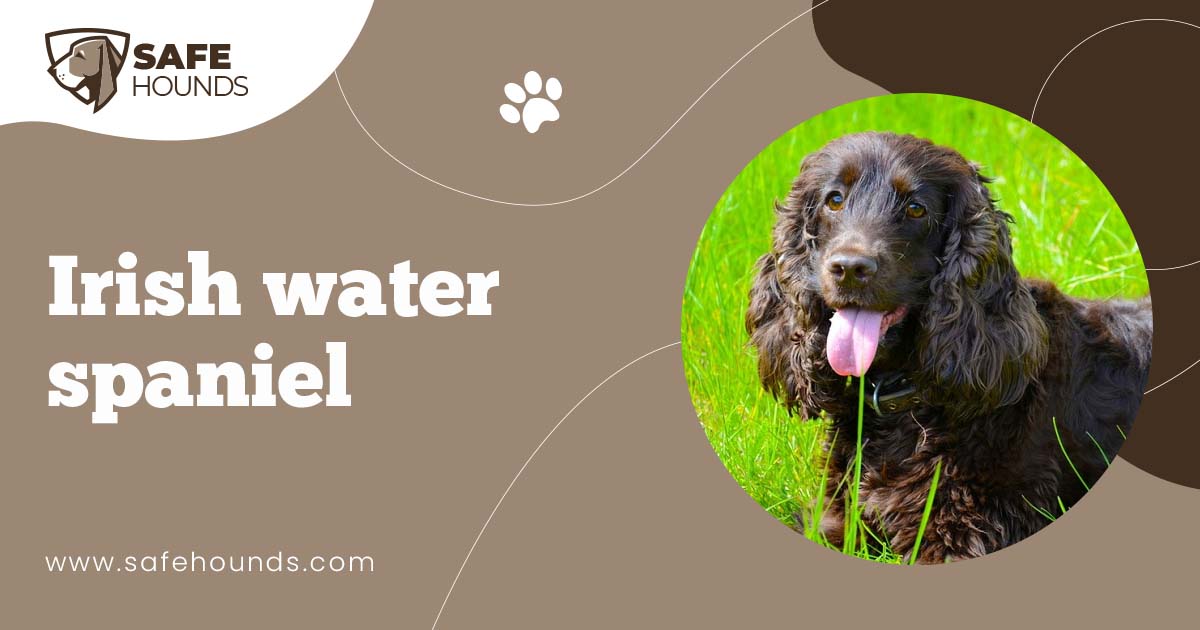 The Irish Water Spaniel has its roots in Ireland and became famous for its daring swimming in cold, rough weather. Although, there are many theories about its origination it was bred mainly in England and Ireland. It probably had its ancestors in Poodle and Irish setter / curly coated retriever hybrids in early Ireland. It had been extensively used on upland game hunting and duck hunting, utilizing its ability to swim in frigid waters. The Irish water spaniel is a good retriever and has the disposition of a gentle family pet.

It is now a rare retrieving breed according to the AKC and can compete in the field sport category. It is the largest of the water spaniels with a deep, brown, purple, curly, crisp textured coat with a stout, strong body. The face and tail have short curly hair while the body is covered with long hair. The undercoat is lined heavily with dense hair that protects it against the coldest weather. A knot of curls hang down to protect the eyes. Ears are also covered with curls. Body is long and slim with a narrow chest which makes it physically perfect for swimming. It also has webbed feet for swimming. Hind quarters are slightly higher than the front body.

As they are basically hunting dogs, they have a great capacity to exercise and enjoy swimming, retrieving, and always ready for a long walk. It is an affectionate, intelligent dog, free spirited with a desire to please. They are best for farms, countryside, and suburbs. The least it needs is an average sized yard. They blend in well as a police dog, guard dog, and even a good house pet. They make good house pets as they shed very little and are low maintenance.

The Irish Water Spaniel stands 22 to 24 inches in height with body weight ranging from 55 to 65 lbs. Its looks make it different from other spaniels with a stout, strong body. The coat is of dense curls with little shedding. The undercoat is dense and the outer coat is curly, crisp, and long-haired. They are strong built, tall with a square body with slightly webbed feet for swimming. The face is smooth with a top knot of curly hair that protects their eyes. The tails are long and rat like that is a striking contrast to the curly haired body.

The muzzle is square and long with lips that are fine in texture. The mouth is deep as the primary function was to retrieve game and fowl. The eyes are hazel colored of dark shade, medium in size with almond shape and tight eye lids. The ears are long, low set with the length reaching down to the nose and covered with long curls. They come in only one color of liver with a defined purplish hue.

The Irish Water Spaniel has a free gait, exhibiting a balanced drive and the legs are perpendicular to the ground. Rear feet are little spread out like a web, thick and large with ample hair. The tail is a unique feature of the breed, with a rat like appearance. The root is thick and covered with curly hair and tapers down to a fine point. They are low set giving a rounded appearance, with the tail carried low.

They are an active breed with a hunting background. As a breed they are intelligent, quick to learn and an alert dog which can be trained easily. They sometimes act clownish while doing humorous antics. With proper socialization as pups, they make for well adjusted pets, which get along well with people at home, but are shy with strangers. The Irish Water spaniels require water for swimming, which is their main activity. They are extremely loyal and a good protector of the house and owner. They are eager, bold and confident, easy going and gentle. They get along well with other pets if introduced early while in the puppy stage.

A lot of maintenance is needed to make the coat free of knots and a matted look. Professional grooming is needed for trimming the coat. People who have allergies to dog dander can also keep these dogs as they shed very little. They need a lot of exercise every day whether it is walking, swimming or running. As mentioned earlier, they do love to swim, so taking them to a pond would be the perfect treat. They have a lot of stamina, as basically they were hunting dogs. They are prone to ear and eye infections so, maintain clean hygienic habits. Brushing of the coat is important on an everyday basis. Trimming of nails and hair around the ears and paws is important.

Irish Water spaniels are basically from Ireland but there origin is unknown. It is possible that more than one breed went into its development. Justin McCarthy of Dublin is the one who is known to have started the breeding of the Irish Water Spaniel and is known as the father of the breed. No written records have been left but it is speculated that Poodle, Portuguese Water Dog and Barbet may have been used to start the breeding of the present day Irish Water Spaniel that were introduced in the 1830s in Ireland.

It was bred to retrieve water birds and upland game in Ireland and England in the early days. They became well known for their swimming abilities in frigid waters and their ability to retrieve game in rough terrain and stark climatic conditions. During those years, hunting and gaming were both a sport and a necessity and a good hunting dog was always an asset. The Irish Water Spaniel fits the bill of a companion dog, on hunting trips as a retriever, and at home as a loveable pet, which gets along well with humans and other pets alike.

During the 1800s after being imported to the United States, they were used for duck hunting and appeared in the ring shows in England and the USA. They are quick learners with a clownish bent of activities. AKC approved them as a separate breed in 1849 while England approved them in 1859. By 1875, they had reached the position of the 3rd most popular sporting dog in the country. In Australia, they were introduced in 1891 and have multiplied to about 200 now.

The Irish Water Spaniel is best known for the curly hair and the historic relevance of this breed can be found in the Roman ruins showing evidence of a similar dog and the lineage also shows Iberian stocks reference. The dogs have gained a lot of popularity over the years due to their unique looks, with numbers increasing rapidly over the years in different countries. Its versatile nature with guarding tendencies has made it a reliable pet.