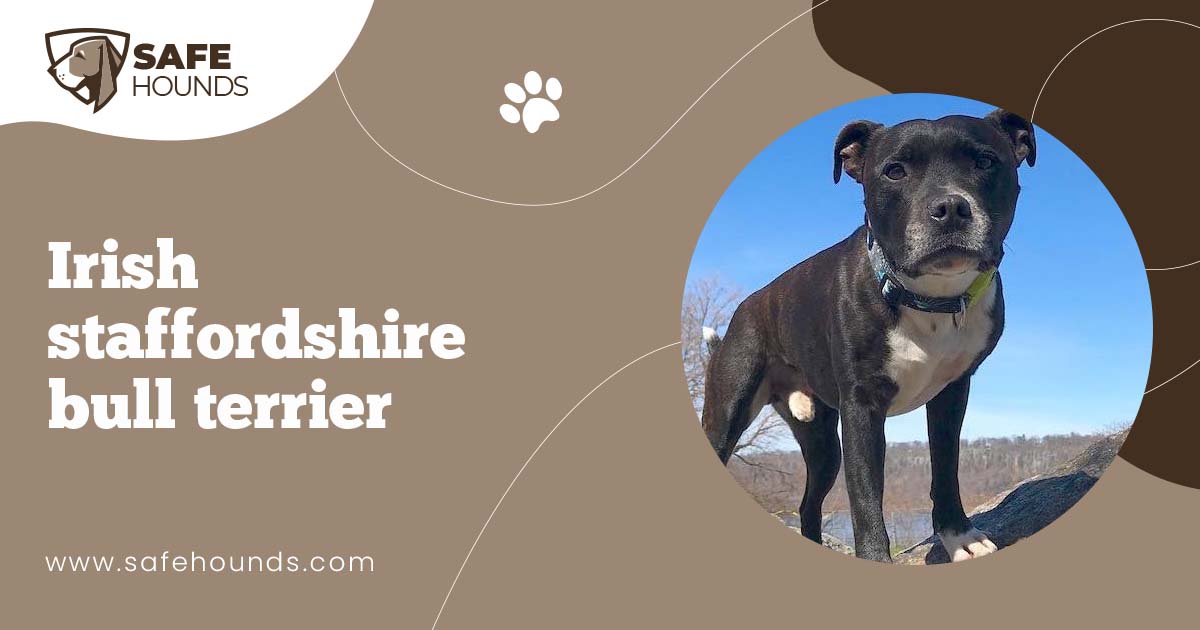 The Irish Staffordshire Bull Terrier was primarily developed to be pitted with other dogs when dog fighting was a popular sport. This breed has descended from the Staffordshire Bull Terrier but this breed is taller and has a leaner build as compared to its progenitors. An Irish Staffordshire Bull terrier measures from 17 to 25 inches at the withers and generally weighs from 55 to 77 pounds. For its size, the dog is noted to be very strong. An Irish Staffordshire Bull Terrier is a muscular dog. This erstwhile fighting dog has strong jaws and powerful teeth that meet in a scissor bite. A puppy can easily tear a wooden fence to investigate what is on the other side. It has a broad head, a short muzzle, distinctly muscled cheeks and well defined stop. This breed has round eyes that commonly have brown irises although some specimens are noted to have golden or tawny eyes. Blue eyes are seen on older Irish lines. Black nose is common for this breed. Some individuals have white or unpigmented noses. A red nose is commonly seen on bloodlines with tawny or golden eyes. This breed can have half-pricked or rose ears. The short coat of an Irish Staffordshirte bull Terrier is soft, sleek and close lying. Coat colors range from red, fawn, blue, black and brindle. Any coat color would often have white markings. Front legs and hind legs are well boned and set well apart.

The dog has such a great joie de vivre. An Irish Staffordshire Bull Terrier loves to work, loves to play and loves to love its human family. In spite of the dog fighting ancestry, the dog does not have a vicious bone in its body that is reserved for people. A properly trained and well socialized Irish Staffie is tolerant of other dogs in the family especially if both have grown up in the same household. This is a playful breed. It is also noted for its good sense of humor. The dog makes wonderful companion and playmate of older and considerate children. This breed though is not for everyone not for a family with very small children and not for an owner with a meek and passive personality. These are very intelligent dogs but they are hard to housebreak. They can be stubborn and very hard to handle if they learn that their owners are not strong minded. This dog can live in an apartment as long as they are physically and mentally exercised otherwise the dog will turn into a very destructive pet. An owner must be wise to the fact that the dog has very powerful jaws. Because of the dog fighting ancestry, the pet can be dangerous to other pets if walked without a leash. The dog is not really aggressive but at the slightest provocation from another dog, the Irish Staffie will instantly go at the jugular. The dog should not be unleashed if the home is not secured with a high fence as this breed is an extremely good jumper.

An Irish Staffordshire Bull Terrier is a low maintenance breed. Brushing the short coat once a week with a firm bristle brush will maintain the coats good condition. This breed is not a heavy shedder. A chamois cloth rubbed on the coat will bring out the sheen and remove any dead hair. Frequent bathing is not necessary for this breed as it will remove the natural oils of the skin. Dry shampooing would be a better option. This is a very energetic breed. The dog has high exercise requirement because of its tremendous stamina. Daily long walks would be necessary to allow the dog to expend its pent up energies. Well cared for Irish Staffie can live up to 16 years as the breed does not have genetic diseases.

Cock fighting, bull baiting and bear baiting are popular blood sports in England many centuries ago. These blood sports provide amusement for the people. Activities where the dogs are made to fight with bulls, bears and other large animals are organized to entertain not only the commoners but the royalty as well. Dog breeds noted for gameness and courage are highly valued as they are pitted with ferocious animals much larger than their size. Fighting dogs are chosen for their strength and fighting skills. Dogs that would crush large animals in seconds are highly acclaimed. These dogs became the forerunners of other breeds of fighting dogs. A breed of dog was developed in Staffordshire, England during the 19th from these Bulldog and mastiff fighting dogs and from various breed of terriers. The Staffordshire Bull Terrier, the breed that was developed is an excellent ratter and hunter of badger. The dog became highly popular as a bull baiting and bear baiting breed as well. However, the breeds popularity waned when Great Britain enacted animal welfare laws. A law passed in 1835 banned bull and bear baiting and other blood sports. Because bear baiting would be difficult to conduct in a clandestine manner, blood sports enthusiasts turned to dog fighting. Dogs were pitted against other dogs in cellars, garages and in remote locations.