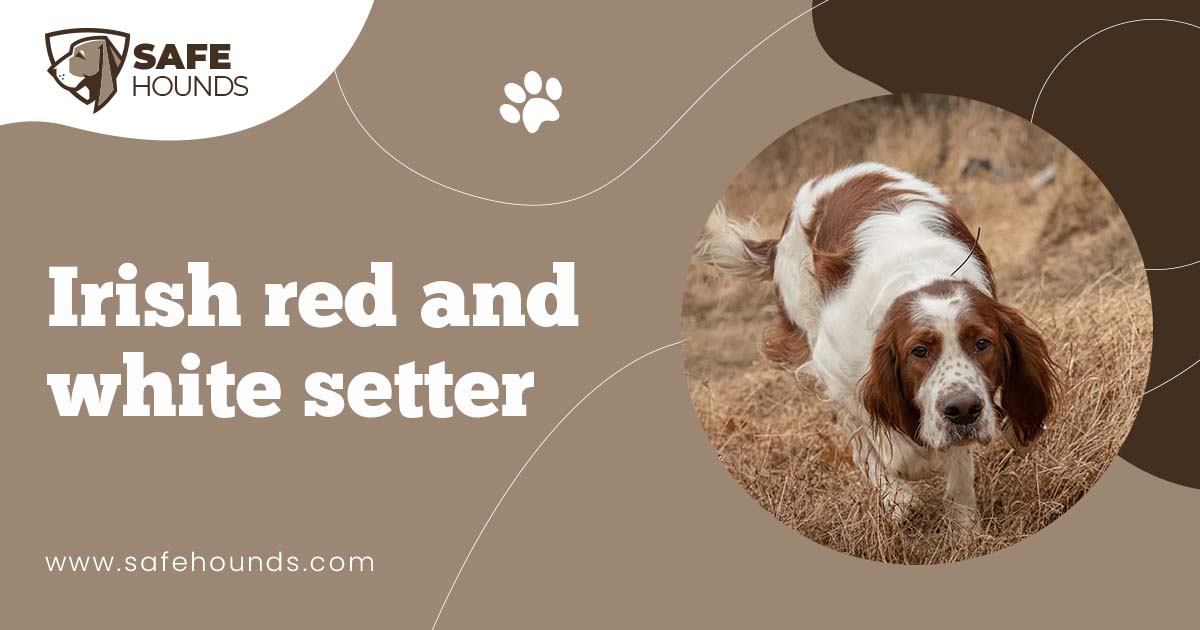 The Irish Red and White Setter is a medium sized powerful, well proportioned athletic dog. Bred primarily as a gun dog, it is also used as a setting dog to net birds. These are exuberant and active dogs that have boundless energies. These dogs are known to run 100 miles in one day. These breed can adapt to any lifestyle. To a hunting enthusiast master, the dog will be an attentive and excellent hunting dog. These dogs are extremely swift. Their ability to cope with rugged harsh terrain coupled with their excellent scenting abilities makes them an exceptional hunters companion. As a house pet, the dog will be a couch potato, one that can be contented to stay inactive indoors as long as it is made a part of the family. Within gun range, the dog will be alert, ready to act on the command of the master. This breed has an innate eagerness to please. An IRWS may be a gun dog, maybe an easy going and mild mannered house pet but once asked by the owner to be on the bench, the dog would exude elegance, enough for it to bag coveted recognitions and awards.

These dogs though are voracious eaters, they like food and if allowed they are inclined to overeat. Obesity is a concern for this dog. Rather than one big meal, feeding the dog three small meals everyday is recommended. The breed does not have major health concerns and is expected to live for 11 to 15 years.

Parti-colored Setter, Red and White Irish Setter all these names pertains to the Irish Red and White Setter, the breed that belongs to the gun dog group. The IRWS weighs from 40 to 70 pound and has a height of 23 to 27 inches measured from the withers. The noble looking head with a good stop is proportionate to the strong and well balanced body. The dog has a domed skull, a square muzzle, jaws of equal length and upper teeth that closely overlaps the lower teeth giving the dog a perfect scissor bite. Eyes that are normally oval, dark brown or dark hazel in color have an intelligent and gentle expression. The slightly pendulous ears that are set level with the eyes are feathered and lies close to the head. A telltale sign that an Irish Red and White Setter is pure bred is the black spots on the roof of the dogs mouth.

An IRWS has a strong well muscled body, a strong back, straight, lean and well boned fore legs and hind legs. The dogs chest is deep and well sprung. Muscular and moderately long neck is slightly arched and is not predisposed to throatiness. The tail of moderate length is strong at the base and tapers to a point. When the dog is alert and moving well feathered tail is carried in a lively manner leveled with the back or slightly lower than the level of the back.

An Irish Red and White Setters body is covered with finely textured, short flat hair that is free from curl. Long, fine and silky hair called feathering covers the back of the fore leg and hind legs and on the outer flap of the ears. The feathering forms a fringe on the dogs flank and chest. IRWSs coats are parti colored. Generally, the flat and straight coat is pearly white. White is the base color with clear red patches on the face, body and feet.

An Irish Red and White Setter love people. Unlike other pets that would form an attachment and loyalty to a particular person and one that would have a favorite, this dog loves the whole family. However, it would be a different matter if the dog is hunting as in this case all the dogs attention and loyalty will be given to the hunter it considers as his master.

These are highly intelligent dogs. Puppies are naturally exuberant but they would take to training easily. With this breed, house breaking would not be a problem. However, training must be done at an early age. As a puppy, this breed has the tendency to pick up bad habits. Exuberant jumping to gain attention, destructive chewing and ignoring owners commands are bad habits that must not be allowed to develop. Training would ensure that the dog would mature into a well mannered dog. The development of bad habits will likewise be avoided. Dogs that are allowed to mature without any obedience training will develop an independent spirit. In this case, training the dog would be a bit of a challenge as it would take longer to train the dog.

IRWS are happy, high spirited and fun loving dogs. They love to play and can be real clowns in their eagerness to please the family. These dogs are exceptionally good with children. They are affectionate and would love to play hide and seek with the children. The game would give the dog the mental stimulation it needs. These dogs though are poor guard dogs. They would announce the arrival of company by barking but these dogs have the tendency to welcome other people and animals to the home. Instead of being aggressive, the dog would welcome newcomers with a wag of the tail. Very friendly indeed!

This breed is not for you if you live in an apartment or if you do not have the time to devote to the dog. These are people dogs and they would always want to be beside the owner. They would jump at the chance to be taken for long walk, in biking and to be included in the activities of the family. However, the natural prey drive of the dog must be taken into consideration. Allowing a dog to exercise off leash can be dangerous as once they pick up a scent they would be off and running away from the owner. These are high strung dogs that would need to run freely several times a day. For the dogs protection a well fenced home in a rural setting will be most suitable.

An IRWS is easy to care for. The hair would need to be brushed regularly with a stiff bristle brush to maintain its tiptop condition. The feathering on the tail, legs, and on the stomach area tends to collect dirt and burr especially if the dog is taken on a hunting trip. This can be removed by a comb or by your fingers. Feathering can be trimmed for neatness but trimming should be kept to a minimum so as not to destroy the natural appearance of the dog.

The history the Irish Red and White Setter just like the histories of many other breeds is quite confusing. It was unknown outside Ireland that two Irish setter breeds existed. Presumably the IRWS predates the Red Setter. This was evidenced by the Irish Nash familys coat of arms that shows 3 red and white setters. Lord Rossmore of Monaghan has kept the same type of setter in the 18th century. Up to this day the IRWS is occasionally called the Rossmore setter. During that time Red Setters were rare. It was only at the turn of the 19th century when dog showing was introduced by the American that the Red Setter gained popularity. The solid Red Setter is more attractive for dog showing. By the end of the 19th century the Red Setter has totally eclipsed the popularity of the red and white. It was even thought that the breed has become extinct. Actually, the breed is favored by hunters and quite a few have moved away to the remote area of Ireland. Fortunately, during the 1920s Rev. Noble Houston from County Down and a handful of enthusiasts have managed to revive the breed.

And in 1944 the breed was considered to be well established. On the same year the Irish Red and White Club was formed in Ireland. The Irish Red Setter Club was already well established in the 1970s and it was tasked by the Irish Kennel Club to monitor the revival of the Irish Red and White Setter. From the initial 7 registered dogs, the numbers of IRWS steadily increased. Presently, 5000 IRWS exist worldwide. The breed was finally revived and gained full recognition.