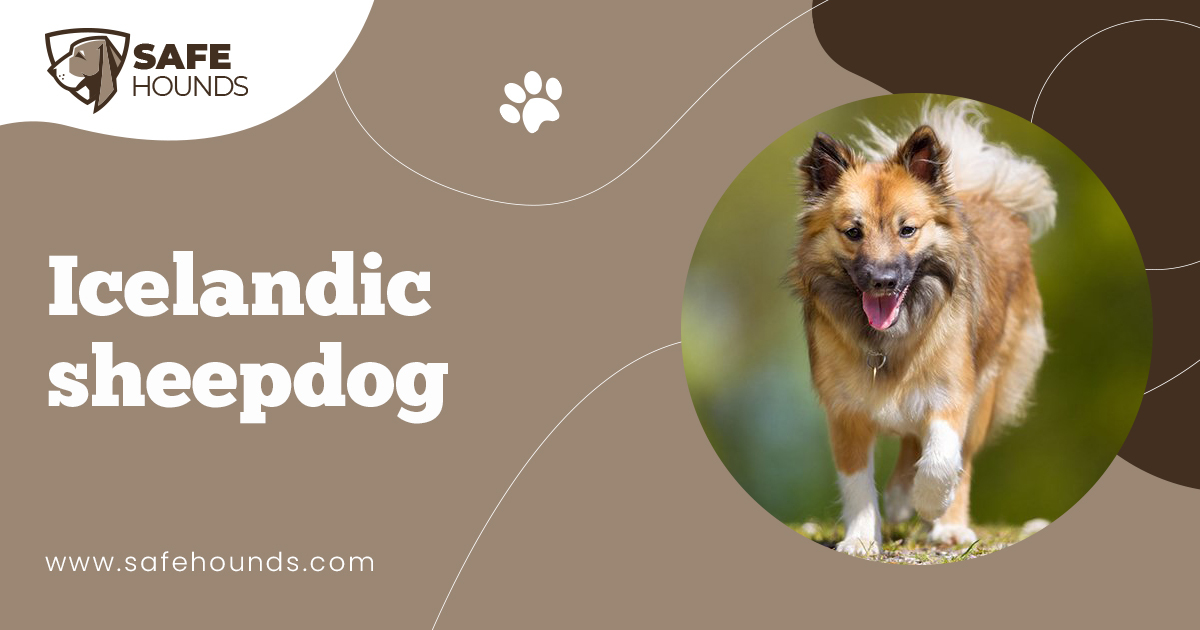 Icelandic Sheepdog is believed to be one of the oldest breed of dogs in the world. As the dog was believed to have been brought by the Nordic Viking settlers to Iceland, the dog is also known as the dog of the Viking. Other names are Iceland Spitz, Iceland Dog, Friaar Dog and Islenski Fharhundurinn. Icelandic Sheepdog is Icelands one and only native dog. As such the dog is honored in its country of origin by being depicted in postage stamps.

The Icelandic Sheepdog is a smaller than medium sized spitz type of dog whose body measured from the withers to the point of the buttocks is longer that the height measured from the withers. This gives the dog a rectangular appearance. There are two varieties of Icelandic Sheepdogs classified according to the coat. One is long coated and the other is covered with a short coat. Both coats though have thick undercoat and a water repellant top coat that insulates the dog from extremely cold weather. A lot of Icelandic Sheepdogs are masked. Coat color can change until the puppy is about two years old.

An Icelandic Sheepdog is a small dog with a big personality. It is often said that this is a big dog in the body of a small one. This means that the dog is enduring, one that has a great determination and a great self confidence that makes it capable to efficiently accomplish varied tasks. In the harsh environment of the mountain pastures, these dogs fend for themselves looking for their own food and shelter.

For centuries the dog was prized for its abilities rather than its looks. The dog is a barker and a keen observer. It is known to bark at anything that would harm the flock it is tending. A bird of prey circling the flock will certainly be noticed by the dog. The dog has the inherent ability to protect the flock of sheep as it would act as a living fence, guarding the territory it considers as the property of its master. Present day Icelandic Sheepdogs are known to enjoy and value the company of horses. In Iceland, aside from herding sheep, these working dogs are most valuable helpers in rounding horses.

Iceland farmer are always seen with an Icelandic Sheepdogs as aside from being excellent shepherds the dog have evolved into devoted and loyal companions. The dogs that are alert and active outdoors always on the lookout for foxes, badgers and other predators that would harm the flock can now be seen indoors, quietly and contentedly lying at the masters feet. And because of their gentle nature, these dogs have developed into excellent therapy dogs.

The Icelandic Sheepdog is a smaller than average Nordic herding spitz. The arched head is closely fitted with skin. The well developed muzzle with a straight nasal bridge tapers towards the large nose and forms a blunt triangle. The black pigmented lips are close fitting. Medium sized and almond shaped eyes are dark brown in dark coated dogs and lighter in light colored dogs. Pricked triangular ears have rounded tips.

Dogs body appears to be rectangular as it is longer than it is tall. The back is level, broad and muscular. The chest is deep long and well sprung. The set on high tail curves and touches the dogs back. Sturdy forefeet have well developed pads. The dog has double claws.

Icelandic Sheepdogs can have two types of coat, the long and the short coat are both extremely water resistant. A long haired Icelandic Sheepdogs outer coat is longer than the medium length outer coat of the short haired dog. Both outer coats are coarse. Long haired and short haired Icelandic sheepdogs have the same type of undercoat, soft and thick. Both dogs have shorter hair on the face, head, ears as well as on the front of the legs. The neck, the chest and the back of the dogs thighs are covered with longer hair. Long hair thickly covers the tail making it bushy.

The most common coat color is white with patches of varying shades of tan, grey, chocolate brown and black. The face, chest and feet have irregular markings. Black masks are often seen on tan and grey dogs.

An Icelandic Sheepdog is an inquisitive, cheerful, friendly and playful dog. The dog always has a smiling and contented expression. Because these are herding dogs, being active is one of their inherent characteristics. These dogs are alert and would tirelessly circle the flock to make sure that no sheep would stray and that the flock is safe from predators. These dogs love to work. Apart from herding they would be most happy if they are given various farm chores. In Iceland, these dogs are most useful in finding lost sheep. In a snow storm where visibility is poor, the dogs keen sense of smell can easily locate sheep lost in snowdrifts. Because of the strong scenting ability, the dog was trained to search for eggs of birds. This keen sense of smell makes the dog excel in search and rescue operations.

Icelandic Sheepdogs are very friendly and playful dogs. These dogs love people, would even greet strangers enthusiastically but they are more fascinated with children. This breed adores children. Many Icelandic Sheepdogs have been trained to be companions and playmates of autistic children. These dogs have evolved into excellent therapy dogs. Their gentle nature makes them useful in helping people recovering illness. An Icelandic Sheepdog is a good watchdog as it is always alert and a barker. The dog though would not be a good guard dog as it is not aggressive and known to be friendly even to strangers.

Icelandic Sheepdogs are still used to herd stocks but more dogs were developed and trained to be house pets. These dogs are truly wonderful mans friends. They have become devoted companions that would suffer from separation anxiety if separated from the human family for even a short period of time. This dog is not for a person who is gone from the home all day. You can leave your Icelandic Sheepdog for an hour or two but more than that, the dog would be depressed. As mentioned, these dogs are used to the great outdoors. But being loyal companions, they would be contented to lie quietly in a corner, under the desk or outside the door, just to be with the master.

A home in the rural area is the most suitable living arrangement for an Icelandic Sheepdog. These are energetic dogs that would need vigorous exercise. An apartment would not be suitable given that the dog is a barker. This trait makes them an excellent herder. The dog is inquisitive by nature and would bark at anything unusual. This barking would not be appreciated by neighbors in an apartment building.

An Icelandic sheepdog need very minimal care as the dog is known to clean itself. Two to three times a week brushing of the coat would be sufficient to remove dirt, unsnarl tangles and to maintain its good condition. The dog sheds heavily twice a year and during the shedding season coat brushing must be done more frequently to accelerate the shedding process. Nails and dewclaws must be trimmed regularly.

The Icelandic Sheepdog is the only native dog of Iceland. The breed has remained the same as the ones brought by the Vikings due to the fact that only a small number of others breed are imported to Iceland. Additionally, in 1901bringing animals to Iceland were forbidden.

Epidemics, natural disasters and periods of famine have made life in Iceland harsh. Over the centuries, these dogs who have adapted to the harsh environment have been indispensable to the Icelandic people who are struggling for survival. In spite of the dogs usefulness, Icelandic peoples views of the dog differ. The dogs are at times loved and in some instances hated. These dogs have adapted to the rough terrain and have become truly important to the Icelandic farmers but these dogs are also carriers of intestinal worms that have caused a number of diseases to sheep and to humans. In the late 1800s the dog population was reduced to almost ¾ because of plagues and distemper. Present day Icelandic Sheepdogs were the descendants of the dogs that survived the epidemics. For hundred of years, these dogs have remained pure and of highest quality because of the restrictive laws and the isolation of Iceland.