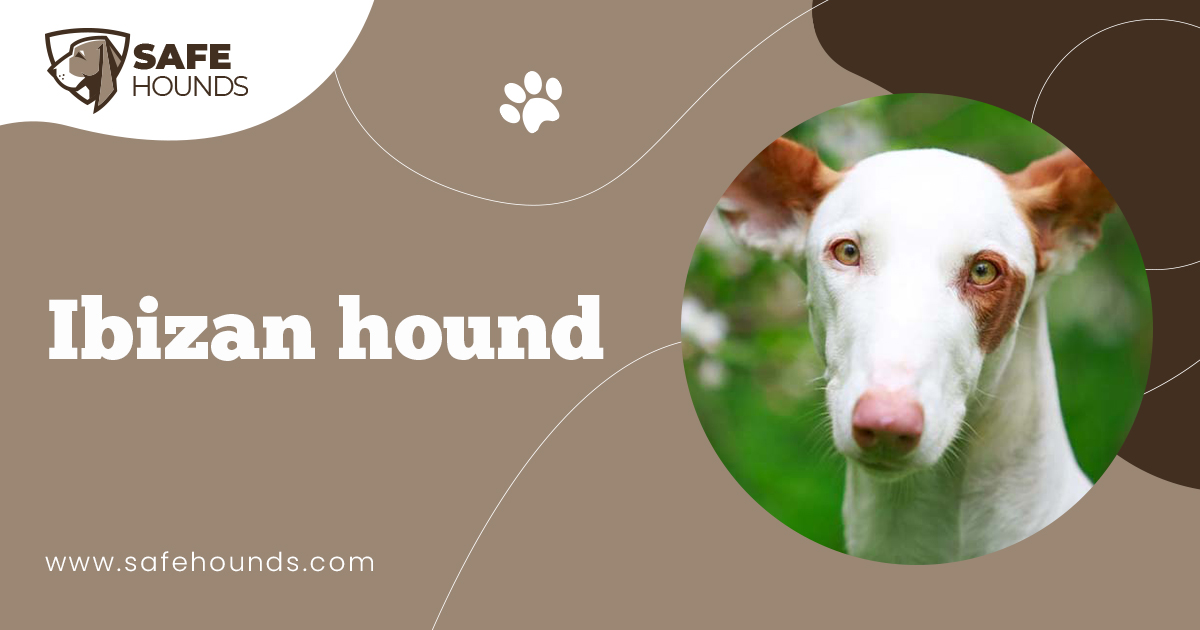 The Ibizan Hound also known as Podenco Ibicenco and Balearic Hound in Spanish Provinces of Catalonia, Valencia, Languedoc-Rousillon and in Frances Provence, and known as Ca Eivissenc in the Balearic Islands of Ibiza, Majorca, Minorca, and Fomentura. Throughout history, the Ibizan Hound was known for his great hunting attributes. They would work alone or in packs and had the ability to change directions in mid-air to chase and capture their prey over various terrains.

The Ibizan Hound is one of the most remarkable of the Mediterranean breeds. They are moderate sized with upright ears, a sculpted head, and magnificent sleek lines. He loves to chase small game such as rabbits, is very alert to his surroundings, affectionate, loyal, a bit wary of strangers, but not very protective. He is not one to bark and is considered to be a bit shy. His most pleasing attribute that seems to have everyone fall in love with him is his agility that allows him to perform all kinds of leaps and swirls to his masters amusement. Many say the Ibizan Hound leaps and twirls as that of a ballerina, even just as graceful.

ary, he does not like being cuddled and loved. He does enjoying playing with the family especially those that include racing, leaping, and pouncing.

The Ibizan Hound is recognized by the CKC, FCI, AKC, UKC, KCGB, CKC, NKC, NZKC, IHCUS, ANKC, APRI, and the ACR. In the American Kennel Club, you can find the Ibizan Hound in the Southern, AKC Hound group.

When you first see the Ibizan Hound, you will think of a small deer like creature with a long arched neck and wedge shaped head. Even though he may resemble a deer, he has large amber eyes that have the expression of intelligence and alertness, triangular ears that stand straight up when alert. His nose is often called rose or flesh colored.

The Ibizan Hound ranges in height from 24 to 29 inches and weighs from 45 to 65 pounds with males being a bit larger than females. Their body is fine boned but is not as slender as other sighthounds that you have seen. The front legs are straight from the elbows to the ground. The choice of removing dewclaws from the front or back is up to the individual owners. The tail is long and slender which is carried low when relaxed. However, he will carry it just a bit higher when alert. His feet are what are called hare-footed with long toes.

You may not realize it but when it comes to the coat of the Ibizan Hound, there are three varieties, which include long-haired, smooth-haired, and wire-haired. The smooth coat is the one you most often see while the long-haired variety is considered rare. The wire-haired coat has hair that is rough hair but is softer than the other varieties with the coat being long as well. Colors of the coats vary which include white and red, white and tan, solid white or solid red.

The Ibizan Hound is a playful dog with attributes such as being good with children, reasonable, loyal, and a bit independent. He will be loyal to his family and a tad bit shy with strangers. Once they know strangers are okay, they tend to relax. The one thing you must watch with the Ibizan Hound is that is was born to hunt. He should not be left alone with smaller animals such as cats, rabbits, or rodents. However, he can learn to co-exist with a cat if he is raised to do so from puppyhood.

The Ibizan Hound is one of the cleaner dog breeds, some say they are as clean as cats, are quiet, quite calm, and even polite.

The Ibizan Hound can be fine in an apartment setting as long as he enjoys outside exercise. They are active indoors but do their best when given a large yard in which to romp, play, and chase anything they see. The main thing to remember is they do jump very high from a complete standstill and will jump over any average size fence to hunt. The worse thing is they will start running and you will not see them again until they are good and ready. They will not do well being placed in a kennel.

Cold weather is not the best for the Ibizan Hound. His coat will not protect him against wintertime weather.

All three varieties of Ibizan Hounds do not need much care when it comes to grooming. The shiny coat only needs the attention of a rubber glove running across the fur from time to time. The wire-haired will need some hand plucking. The toenails should be clipped short and their ears should be cleaned regularly.

Many people believe the Ibizan Hound is one of the ancient dogs depicted on the tombs of Pharaohs dating back to 3,000 BC. Today, Elaine Ostrander, a geneticist at the Fred Hutchinson Cancer Research Center and University of Washington explained that recent DNA analysis shows that the Ibizan Hound is a recent development, which was bred to resemble the older dogs. As stated by Mark Derr, a science writer for the New York Times, concerning the studies performed by Ostrander and her colleague, Dr. Leonid Kruglyak, they have found genetic variations that allow them to distinguish among 85 dog breeds and to identify an individual dogs breed with 99 percent accuracy.

Others still hold to the belief that the remains found are very similar to the Ibizan Hounds of today. No matter, which report is accurate, it is still believed the Ibizan Hound originated from the island of Ibiza, which is one of the Balearic Islands just of the coast of Spain. Early Carthaginian and Phoenician traders are believed to have brought the dogs from Egypt to this the islands around 800 to 600 BC. The breed became common on the island of Ibiza along with other neighboring islands and was used there to hunt rabbit and other small game.

The breed was at one time considered to be a member of the farms livestock and was eaten right along with other livestock. Today, Spaniards still do not regard the Ibizan Hound as a family pet but more as a worker dog. Hunters in Spain still use the Ibizan Hound for hunting mainly in packs with females with only one or two males. The breed is similar to what is known as the Pharaoh Hound but on a bit larger. The American Kennel Club recognized the breed in 1979.