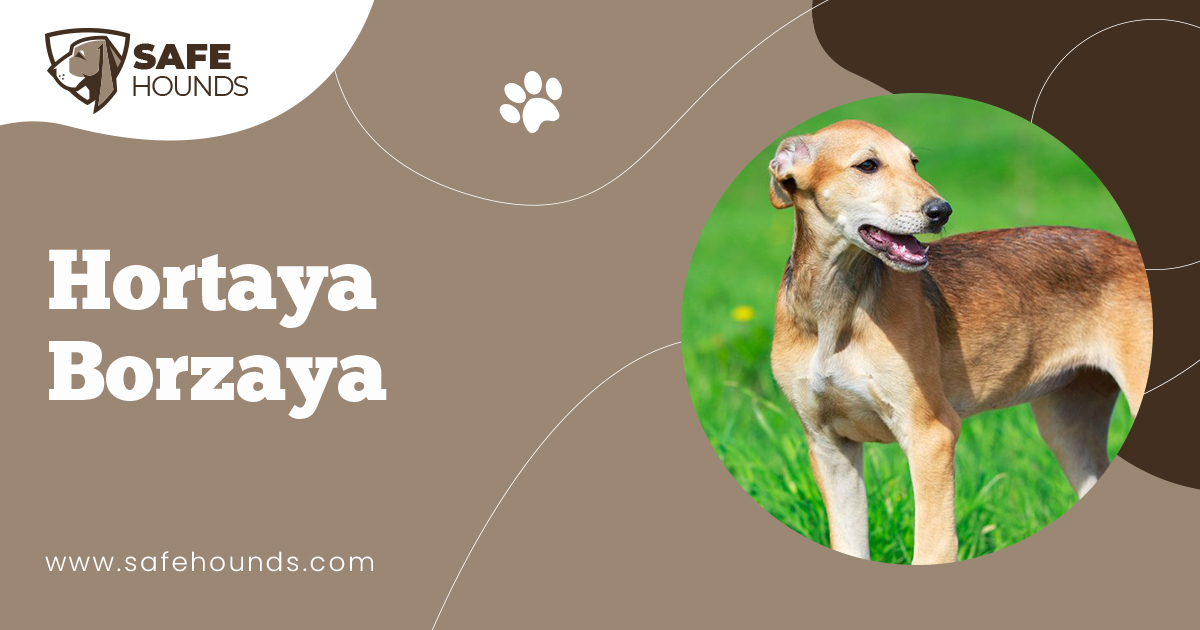 A Hortaya Borzaya is an old breed of sighthound that was bred and developed in the steppes of Russia and Ukraine during the 18th century. The breeds precise origin is unknown although it was believed that the breed has originated from the Whippet or from the Italian Greyhound. For centuries this breed of sighthound has remained unheard of outside the remote steppes of CIS. This outstanding hunter was not introduced to other countries mainly due to the rather peculiar economical and political situation in the former USSR. Unlike the Borzoi, another indigenous breed of Russia, the Hortaya Borzaya has existed for so long without gaining international recognition.

Bred name is pronounced chortah-yah borsa-yah. This is a large to very large breed of sighthound with a short coat that comes in varied color combinations of white, black, cream, red, sable and brindle. This breed has a lean body but the immense strength of the breed can never be doubted. Borzois and other breeds of scenthounds and sighthounds were kept by the nobility as hunting wolves and other large game is a favorite pastime of the nobles. However, the Hortaya Borzaya are generally bred and kept by serious hunters that depend on these hunting dogs for their livelihood. The familys subsistence depends on the prey caught by 2 to 6 Chortaj kept by a hunter. Up to this very day, most of the Chortajs are found on the remote villages of the vast Russian steppes hunting hare, fox, wolves, deer and antelopes. This dog was bred and developed to be a hunter. After the breed was discovered some specimens were taken to the cities and owned by non-hunters. Owners must be aware of the fact that these dogs were rigorously selected and developed to be a hunter. For years these dogs have existed in rural areas, fed a diet that mainly consists of cereal fillers, vegetables and very little meat. A Chortaj owner must be aware that the dog cannot tolerate high energy and protein rich foods.

The Chortaj, as the Hortaya Borzaya is affectionately called by its fanciers is a breed of sighthound that has adapted to the climate and to the prey in the location where it has developed. This has resulted to the development of 5 distinct types with several subtypes to the main type. As such, the breed is noted to have a highly variable appearance. Hortaya is translated as shorthaired sighthound. This breeds short hair is dense and straight. Hair length on the body is about 2.5 cm. A short and not too heavy breeches and a rather sparse feathering on the tail is typical for this breed. Coat colors range from black, white and shades of cream. Dogs can also have sable, red or brindled coats. This breed usually has a black mask, black overlay and grey, red or tan markings. The elastic skin tightly fits the lean but well developed muscles of the dog. This hunting breed appears to be lean but it has a robust body. The bone structure may not be massive but it can never be denied that the dog possesses immense strength. Hortaya Borzaya are tireless hunters. The dog has to be about 60 to 75 cm at the withers to be able to take a fox. A larger dog would have less stamina and would be less agile when hunting on the hard ground of the steppes. These dogs have to make an average of 10 pursuits everyday thus strength and stamina would be very important assets. The dog has to have a soft mouth as well so as not to damage the fur of the prey that is also important to the hunters.

A Chortaj has a long clean and narrow wedge shaped head that has very little flesh. The long muzzle is pointed and arches slightly towards the black nose. Supple ears that are set at eye level are thin and narrow. Large oval or almond shaped eyes are obliquely set. Black rimmed eyes generally have brown or dark brown irises. This breeds long neck is muscled and clean. Oval shaped chest is deep almost reaching the level of the elbows. The broad and muscular back has well defined withers. A Hortaya Borzaya has a muscular loin and well tucked up abdomen. The dog has a long saber shaped tail that is carried low when the dog is relaxed and raised a little higher above the back when the dog is alert.

Aside from being a good hunter, a Choertaj is an intelligent breed. The dog follows the commands of its master. However, because of the diversity of the hunting course, the dog has learned to be independent and to react accordingly even without the directions of the hunter. Because they have lived for years in a semi-wild state it is expected for the dog to have a rather untouchable character. Obedience training and socialization is very necessary for this breed. Once tamed, these dogs can be very friendly. It is not aggressive to humans and to other canines. Majority of these dogs are still seen hunting in the remote steppes although specimens are now seen in the cities. The dog has adapted well to being the pampered pet, one that is noted to be affectionate and gentle with the children. This breed though possesses an excellent sight and a high prey drive. A Chortaj must always be leashed or muzzled as it can be very dangerous to smaller pets.

These tall dogs would benefit from elevated food and water bowls. Hortaya Borzaya hounds roam the remote villages but in the city, the dog would need a special collar that would not put undue pressure on the slender neck. These dogs that were primarily developed to be hunters are valued for their hunting abilities rather than for their appearance. It would not be surprising if the dog in the remote villages have never known the feel of a brush on their short dense coat. Dog owners in the cities though know that the dog would need regular grooming. The Chortaj is not a high maintenance breed. Occasional brushing would be enough to maintain the good condition of the coat.

The Hortaya Borzaya a breed of sighthound with an origin that was traced back to the 18th century. This large size breed of sighthound was developed in the steppes or grassland plains north of the Black Sea. This breed has spread to Southern Russia, Ukraine, to Kazakhstans westernmost regions and to the other countries that form the former Soviet Republic thus it is not possible to attribute the breeds development and origin to a specific country. In spite of the fact that the Hortaya has existed for centuries, not many people know about the breeds existence. The Borzoi is the only Russian breed that has claimed international recognition. In later years, the Ovcharka, a herding breed also gained international interest. The Hortaya Borzaya on the other hand has remained in relative obscurity. This sighhound has remained the hunting dog of the country people who hunted out of necessity rather than for pleasure. The Hortaya is one of the few remaining breeds of practical hunters. Unlike the Borzoi that became the breed of choice of the Russian nobility, the Hortaya Borzaya were bred and kept by the country people thus very few specimens are seen in cities and in civilization centers.

The Hortaya Borzaya was a practically forgotten breed as the dogs never gained the interest of people who keep dogs for pleasure. This fact though has never done the breed harm. Because breeding was never geared towards creating a breed for show, the healthy gene pool was maintained because of rigorous selection. The breed remained in excellent health. A Hortaya Borzayas life span is from 14 to 15 years. Dogs are actively hunted up to 10 years of age.

For decades, this breed was exclusively owned by Russians. Owners are mostly hunters that live in remote areas. The dog is highly valued for its abilities to put food on the table. In the late 1980s, Russia enjoyed a boost on tourism. Tourists that visited far flung and remote places in the country came in contact with the Hortaya. Foreign hunters were amazed at the ability of the dog to hunt effortlessly and provide the hunting group with fresh meat for dinner. Of course the long legged and elegant conformation of the breed was also noticed.

USSR has made the first breed standard in 1951. The breed is as yet unrecognized by FCI but the RKF (Russian Kynological Federation) officially maintains the standard. About 3500 Hortaya Borzaya exists worldwide. Most of these dogs are found in their natural habitat and some are owned by Russians living and working abroad. Russia has finally realized the outstanding qualities of this sighthound and is now trying to have the breed internationally recognized. The country has also limited the exportation of the dog to other countries. Presently, it is no longer possible for people outside Russia to obtain this extremely rare breed of sighthound.