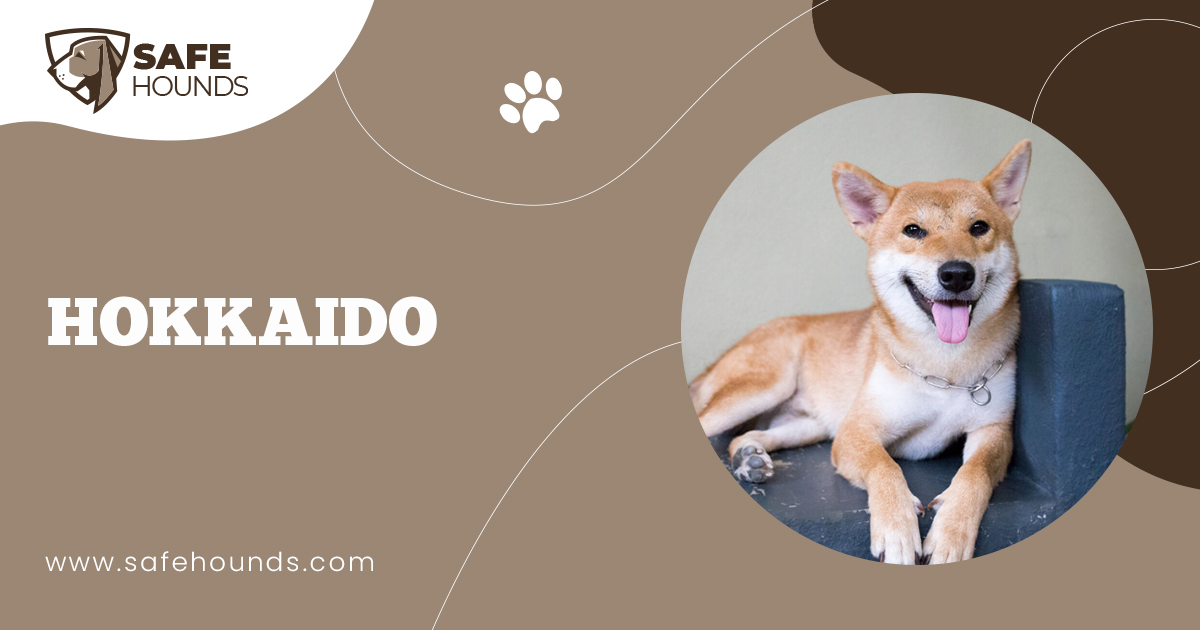 The Hokkaido and the Ainu people have a long history of being together as both are believed to be the first to inhabit Japan. Since ancient times, this breed of dog has existed with the indigenous people of Japan. The Hokkaido is a hardy dog noted for its ferociousness, strength and agility – the qualities that make this dog adapt well to the rigorous life in the frigid and the harsh Hokkaido Mountains. This able hunter has a dense coat that protects the dog against the cold. Before the introduction of firearms, the Ainu people hunts with spears, bows and arrows. This extremely agile dog is capable of following a fleet footed deer and keeps it at bay until the Ainu hunter arrived with its spear. Often thought to be a wild breed, the Hokkaido is adept at fighting the Higumo or the Hokkaido brown bear. For its size, this breed exhibit enormous strength and boldness. Bears are one of the natural enemies of the Ainu tribe. The dog protects its people from this predator by scampering up the back of the bear and attaching its strong teeth to the animals neck never letting go until the bear is floored.

The Hokkaido has always been the able helper and companion of the Ainu people. Aside from being a hunter, these dogs are also utilized as draft dogs, watch dogs and of course house companions. A Hokkaido has a naturally suspicious personality, a trait that makes it an excellent guard dog. This dog will never fail to announce the presence of strangers and once you have this dog on your doorstep, no intruder will ever be allowed to enter. These dogs are fearless defenders of the family. Although they have a ferocious and wild reputation these dogs are well behave, loyal and affectionate pets. A Hokkaido is known to welcome its master with resonant howling not unlike the howling of a wolf. This breed was once considered to be a working breed though in recent years, this dog has found another occupation – that of being a desirable house pet. This is a clean breed, intelligent and easy to train, fun loving and very loyal. These dogs are easy to care for as well. What more can a prospective owner ask for?

The Hokkaido is a beautiful dog. The athletic well proportioned body with its luxurious hair gives the dog a striking appearance. This active and agile breed has a dignified though bold appearance. A Hokkaido has a broad and rather flat skull and a wedge shaped muzzle. The straight nasal bridge is tipped by a black nose. A white coated Hokkaido can have a flesh colored nose. Black rimmed tight lips enclose non-protruding strong teeth with scissor bite. This breed has well developed cheeks. Some individuals have black spots on the tongue. Small triangular eyes are dark brown in color. The eyes are set well apart. The ears of this breed are not typical to other Japanese breeds. The Hokkaido has small triangular ears that are very erect and inclines slightly forward.

This is a lithe breed. Thin muscular body has clean cut lines. This dog has a strong straight back, high withers and muscular though moderately broad loins. It has a well developed forechest. The deep and quite broad chest has well sprung ribs. The belly is well tucked up. The set on high tail is thick and covered with harsh off standing hair. The tail is almost always carried over the back tightly curled or forming a sickle. The tail reaches the hocks when let down. The Hokkaido has a double coat that protects the dog from the freezing temperature in the Hokkaido islands. The straight outer coat has a harsh texture. The undercoat is wooly soft and dense. Coat color varies from wolf gray, sesame which is red fawn with black tips, red, black, tan and white. A tan coat is most common.

A dog noted to have a wild and ferocious temperament would make some people think twice to have it for a pet. The dog would be more intimidating if it has a reputation of facing 650 pound bears. The Hokkaido has earned these reputations but this working dog is also noted for being an exceptionally gentle and loyal home companion. This breed is actually courageous and has an exceptional ability to fight the Hokkaido bear. However, this breed is very well mannered, obedient and loyal to its human family. This working dog has adapted well to being a household companion, to being the jogging and hiking companion of the master as well as being the lively and energetic companion and playmate of the children. However, it would be a good practice to introduce the dog well to the children. Small children should be supervised when in the company of the dog. This breed forms a strong attachment to its family. It has a strong sense of direction as well. An Ainu Dog is said to be able to return to its master in spite of a great distance. These dogs may tolerate other dogs in the household but it would be necessary to keep the dog away from smaller pets due to its inherent high prey drive.

This dog has moderate exercise requirements and they are moderately active inside the home. Still, a Hokkaido would not do well in an apartment. The breed would need a reasonably sized yard. Because of the dense double coats, the dog can live outdoors. Unlike other breeds that would lie contentedly on the couch or in front of the fire, this breed would prefer to be outdoors to run, to play or just to laze under the sun. A game of fetch with the children would not only take care of the exercise requirement of this breed but it will also keep the dog alert.

A Hokkaidos dense longish coat is what gives the dog an impressive appearance. The coat does not really require extensive grooming but it would benefit from regular brushing. The dog enjoys the outdoors and the longish harsh hair could be matted with dirt and mud. Bathing and shampooing would keep the coat clean and shiny. Bathing would also prevent flea and tick infestation. However, frequent bathing should be avoided so as not to dry up the natural oils that weatherproof the coat.

The Hokkaido, also known as the Ainu dog is probably one of the oldest if not the oldest breed of dogs in Japan. The origin of this breed is really unknown but its history is strongly related to the history of the first settlers of Japan as it is thought that this breed has stemmed from the matagi-ken brought by the Ainu tribe. The Ainu tribe was described as a race of white hairy people. This tribe migrated to Japan 3,000 years ago. This race of unknown origin lived in all the islands of Japan during ten centuries BC.

The Ainu people brought with them medium sized spitz type Nordic dogs. Over the centuries, the Yamamoto (Japanese) people grew in numbers and slowly the Ainu tribe was forced out of their settlements. In the 1140s, during the Kamakura era, these people that has been occupying Hunshu, the main island of Japan was driven to the remote Hokkaido, an island in the northernmost part of Japan. The Ainu people were forced to survive in the frigid temperature and the rugged terrain of the Hokkaido. Apparently, the dogs have helped the Ainu people to survive. The hardy fierce dogs were developed into excellent hunters of bears. These dogs are capable water retrievers and trained by the Ainu people to catch salmon in spring during the heavy salmon runs. These fierce hunters were depended on by the people to protect them from predators. The dog has a suspicious nature making it a suitable watch dog. This breed that was noted for its strength was used as a draft dog. Because the dog is constantly kept at home and because it is a well mannered clean dog, it has become a most valued home companion. These dogs are considered to be family members. An Ainu dog is revered by its people. They are buried in much the same way as the Ainu people are buried.

These dogs were commonly called Ainu dogs. Due to the relative isolation of the island, the dogs remained virtually unchanged for centuries. As mentioned, this breed is of unknown origin although because of the blue black tongue that is typical to the Chow Chow and Shar Pei breed it was suggested that these breeds of dogs have one common origin. In 1869, Thomas W. Blankiston, an English zoologist gave this breed the name Ainu ken after the tribe it has lived with for many centuries. In 1902, an army expedition in the Hakkoda Mountains was caught by a snow storm. The Hokkaido dogs were utilized to find the survivors. The official name Hokkaido-Inu was given to this breed in 1937 when it was designated as a natural monument by the Ministry of Education.