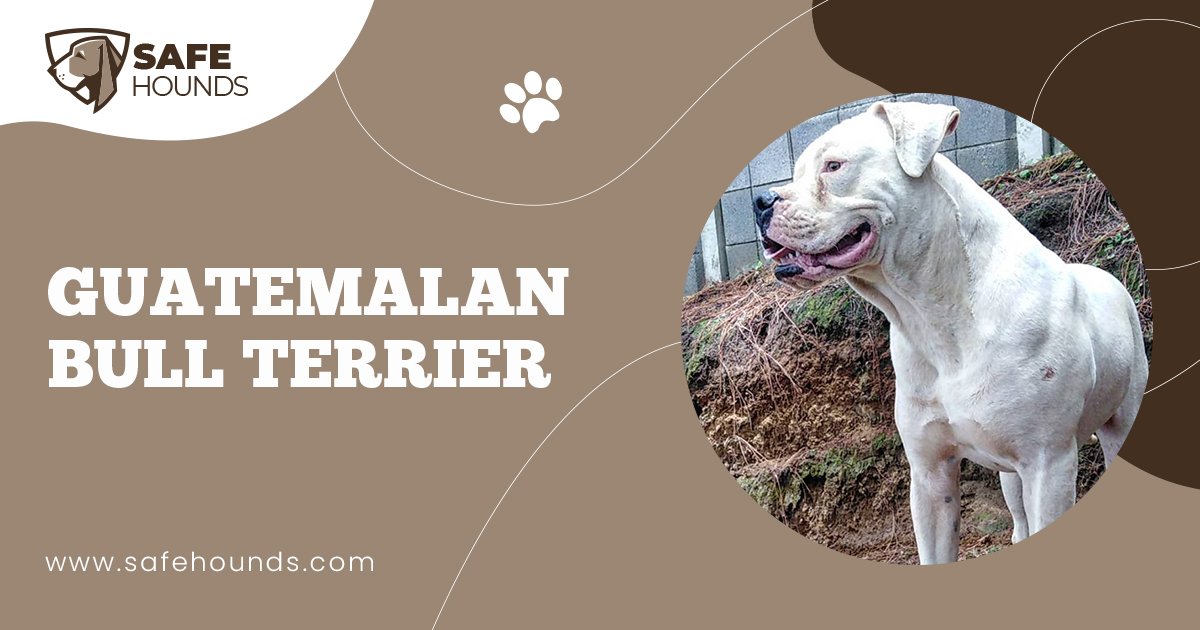 The Dogo Guatelmateco is a medium sized dog breed that was developed in Guatemala in the 1930s. This rare breed is relatively unknown outside its country of origin. To an uninformed eye, this bred can be easily mistaken for a Dogo Argentino. This breed also resembles an American Pit Bull Terrier although both breeds were not named as the progenitors of the Dogo Guatelmateco. Formal breeding was started in 1930s but dogs of this type are already seen in Guatemala as early as 1920s. However breeding then was done randomly and it was only in the 1930s when the breeding was defined.

The Guatemalan Bull Terriers progenitors are the Dalmatian, Dogue de Bordeaux, Boxer, Bull Terrier and the Fighting Dog of Cordova. With this ancestry it would not be surprising for the Dogo Guatelmateco to be a celebrated breed of fighting dog. The Dogo Guatelmateco is the first native breed not only of Guatemala but also of Central America. Former Guatemala President George Ubico has owned this breed. This breed was specifically developed to be a protection and guarding dog. This breed is really an excellent protector but the dog also has a stable and balanced temperament that makes it an excellent addition to the family.

Dogo Guatelmateco exits in two types – the standard and the larger or giant type. The giant type though is considered by breed enthusiasts to be a hybrid. It was speculated that these larger dogs resulted by crossing Dogo Guatelmateco with Dogo Argentino. Both types show the desired qualities of being dependable and excellent protection dogs. This breed is highly valued in Guatemala where crime rate is quite high. With these dogs in the home, the owners will be assured that the family and the property will be protected at all cost.

A Dogo Guatelmatecos appearance is similar to that of the American Pit Bull Terrier and to an American Bulldog. This is a medium sized breed with a muscular longer than tall body. This dog stands from 22 to 24 inches and weighs from 55 to 79 pounds although larger strains measure up to 27 inches at the withers and weighs up to 121 pounds. This breed has a large head that is rather square in shape. Being a brachycephalic molossus, the dog is noted to have a square muzzle and a slightly undershot jaw. The jaws though are very strong. This breed has slightly hung lips. Strong teeth meet in a scissor bite. The ears can either be left in its natural pendent style or cropped to make it look like the ears of a Boxer or a Doberman. The tail can be docked or left in its natural state. A Dogo Guatelmateco is a rustic dog. This breed has a tight fitting skin that is covered with smooth dense coat that is a little rough to the touch. A Dogo Guatelmateco is a white coated breed. The dog may have a black eyes patch and small black spots on the head.

The Dogo Guatelmateco was developed to assume protection work but because of the dog fighting ancestry of its progenitors, the breed has evolved into celebrated fighting dogs. This does not mean though that the dog cannot be trusted to stay with the family. True, this strong and ferocious dog would make intruders tremble in fear but the dog remains controlled and calm in the presence of the family. This breed enjoys being with its people. When properly trained and socialized, this dog can be the best friend of a child it has grown up with. A Dogo Guatelmateco though is not a suitable breed for a novice dog owner. This breed needs to look up to the leader of the pack. An owner that does not have the ability to be firm with the dog would best opt for another breed. Socialization and obedience training is very necessary for this breed. A well socialized Dogo Guatelmateco would tolerate other dogs and would learn to accept strangers accepted by the family as guests. This medium sized dog would do well in apartments. This breed is not very active but they would appreciate a long walk everyday or a romp in a well fenced yard.

A Dogo Guatelmateco is a low maintenance breed. This is a short coated breed. Occasional brushing would be sufficient to maintain the good condition of the coat. Frequent bathing will not be necessary as well. A damp cloth rubbed on the coat will be enough to remove dirt and dead hair. Of course the dog would benefit from regular ear and teeth cleaning. Nails must be regularly trimmed as well. This fairly healthy breed is expected to live for about 11 to 12 years.