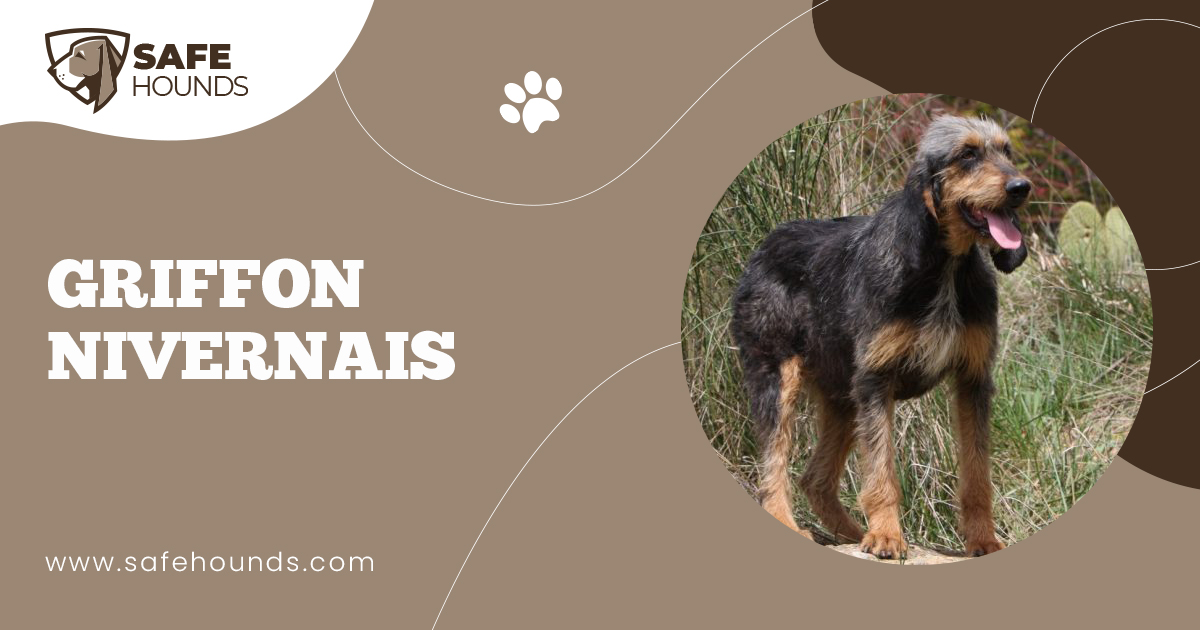 The Griffon Nivernais was originally developed to be a hunter of bear and wolf. A hunter would probably have nothing more to ask for in this dog. The Griffon Nivernais also known as Chien de Pays is a hardy dog with a robust constitution and an incomparable eagerness to hunt. This passionate and tireless hunter has an excellent scenting ability and a good voice – qualities that are most valued by French hunters. For centuries, this breed has been favored by royalty because of its inherent outstanding hunting abilities. This courageous dog shows initiative and independence while hunting. In France, this breed is considered to be the best hound to hunt boar.

Although the Griffon Nivernais origin is shrouded in darkness, this breed is considered to be one of the oldest hunting hounds of France. As the name suggests, the breed was develop in the Nivernais district of central France. This dog usually hunts in packs but are also known to hunt individually. During the early times a hunt could spread over a 100 km area and could last for days. This dog is known for its great endurance and it has adapted well to this kind of hunting. This dog that is considered to be a specialist in hunting wolves has the agility to pursue the prey over rugged terrain even in cold or rainy weather. If necessary, this dog would not hesitate to jump into the water to follow its quarry. The wiry coat is a very valuable asset of the dog as it serves as protection when the dog has to follow the prey in thick underbrush.

This wiry coat that gives the dog a rustic and unkempt appearance may repel prospective owners looking for a dog with an elegant appearance. This dirty looking dog though has a loyal and affectionate personality. The dog may have a melancholy expression but it is not aggressive and makes a wonderful companion once hunting season is over.

This medium sized hound has a nearly flat skull and a slightly marked stop. The muzzle is of the same length as the skull. This dog has a black nose and the dark colored eyes have a lively piercing expression. Hanging supple ears are well covered with hair and reach the nose when drawn outwards. Well developed jaws enclose strong teeth that meet in a scissor bite. This breed has a robust body that exudes strength and stamina. The back is rather narrow but it is long and solid. The chest is quite deep descending to the level of the elbows. Set on high tail is not very long but well furnished in the middle. Tail is usually carried saber fashion.

There is no doubt that a Griffon Nivernais is a wolf and a wild boar hunter par excellence. This dog is first and foremost a hunter but it can be developed into a wonderful home companion. However, the rustic unkempt looks of this breed hides its true personality. With its melancholy and aloof demeanor, the dog projects a standoffish behavior. A Griffon Nivernais is actually a friendly breed. This dog forms a strong attachment to the human family and craves attention, loves to be petted and to receive affection from the master. The nostalgic appearance often earns the affection of children. A well socialized Griffon Nivernais makes a good companion for older children. Accustomed to hunting in packs, this breed is good with other dogs but would need to be socialized to curb its tendency to chase smaller pets.

This breed is not a good choice for a first time dog owner. A Griffon Nivernais has a dominant behavior therefore owner has to be firm otherwise the dog will be a handful. As with any other breeds socialization and obedience training is necessary. This is an intelligent breed but it also has a willful streak that can make obedience training rather challenging. Obedience training therefore has to be started when the puppy is about 3 or 4 months as by then the dog would be more manageable.

As mentioned, a Griffon Nivernais can be a wonderful home companion as it has an adaptable nature. However this breed would not be suitable for apartment living. Apart from being a barker, this breed needs lots of space. A Griffon Nivernais has high exercise requirements and would appreciate to be allowed to live with a pack in the countryside. When the dog is not hunting owners must ensure that the dog is provided with its exercise requirements. Griffon Nivernais owners must be aware that this breed does not tolerate heat well thus it is necessary to avoid hot temperatures when taking the dog for a walk.

The Griffon Nivernais is basically valued for its hunting prowess and not for its appearance. Nevertheless, the dog would still require regular grooming. This is an easy to care for breed. The shaggy coat would benefit from regular brushing. This is a hunting dog and extra care must be given to the ears most especially if the dog has been hunting. Bathing and shampooing should be done when it is really necessary as too frequent bathing will remove the natural oils of the coat.

The Griffon Nivernais, a hardy dog with a body built for endurance and noted to be a good nosed courageous hunter is considered to be one of the oldest breeds of hounds in France. Similar to other ancient breeds, the true origin of the Griffon Nivernais was lost in antiquity. This breed originated from the Morvan and Nivernais districts of central France. For centuries, this rough coated breed has been used by farmers and shepherds in the highlands of central France to control wolves and wild boars.

One theory as to the origin of this breed believed that it has descended from the Gallic hound (Canis Segusius) brought by the Gauls. Another theory speculated that this breed has descended from the grey coated Saint Louis dogs. The wire coat that protects the dog from brush when hunting in harsh terrain could have resulted from crosses with the Phoenician sighthounds. It was also speculated that the wiry shaggy coat could have come from the Eastern herding and water dogs. The Griffon Nivernais has been in existence as far back as 1200s. As these dogs were the favorites of King Louis lX, they were then popularly known as the Chien Gris de St. Louis of St. Louis Grey Dogs. It is thought that these dogs have come from the Balkans and brought to France during the last crusade. For 200 years, the breed continued to be popular. Hunts during this era consist of liveried beaters, heavily embellished trumpeters and of course hundreds of Griffon Nivernais hounds. However, the royal packs of Griffon Nivernais were abandoned when Louis Xls reign ended. Francis 1, the successor to the throne preferred white coated hounds. Interest for the breed was revived at the reign of Louis XlV as the Sun King also favored the Nivernais hounds.

After the French Revolution, the hounds were scattered and very few survived. More than a hundred years later, dedicated breeders fearing the extinction of the breed established a breed club in 1900 and gathered the remaining specimens to start the reconstruction of the breed. Remaining individuals found in the Nivernais area were called dog of the region. These dogs were crossed with the Griffon Vendeen, the Ottterhound and the Foxhound to improve the gene pool. The breed was restored and made a come back with a new name. The breed is now called Chien de Pays which means a local breed.

Because of the unkempt appearance the dog is affectionately called barbouitlards (dirty and besmirched). This dirty dog though is highly prized by weekend hunters as they are relatively easy to care for and a passionate hunter that easily adapts to any type of terrain. Moreover, dog owners enthuse that 4 or 5 of Griffon Nivernais are better that a dozen of other breeds of hunting hounds. The dog is utilized all over France and exported to other countries like Greece and United States. In Canada, the Griffon Nivernais hunts bears.