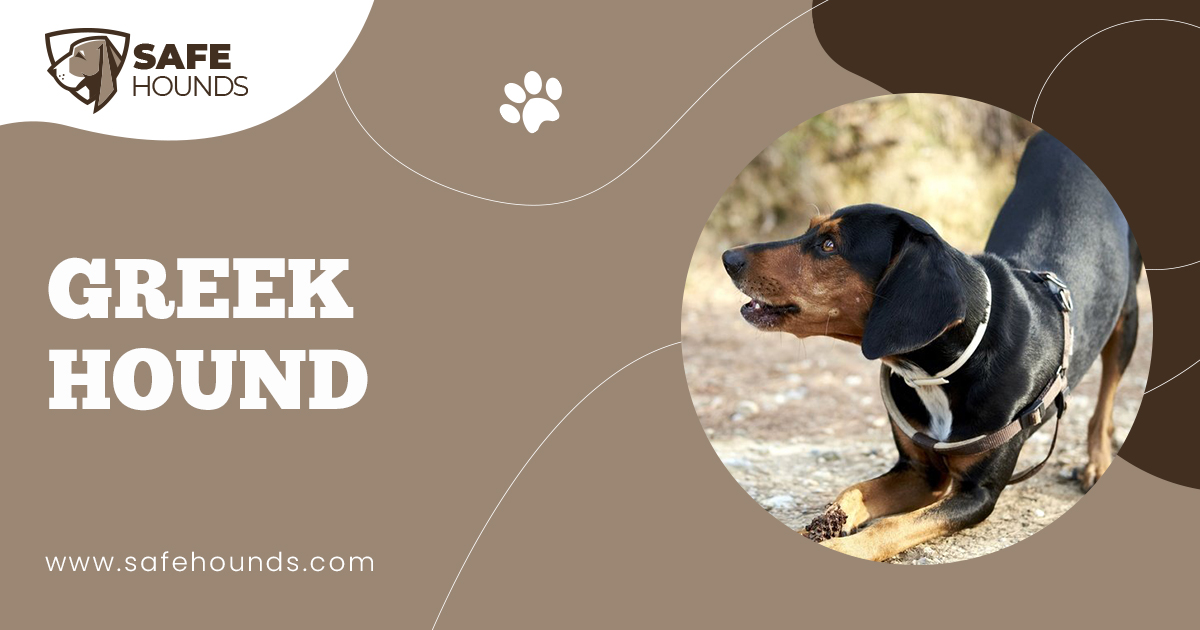 It was written that Cerberus, the 3 headed and serpent tailed fierce and flesh eating dog keeps its post at the River Styx to guard the gates of Hades and prevent anyone from entering the land of the dead. Of course this pitiless dog exists only in Greek mythology. However, it can not be denied that some of the most notable breeds of dogs hails from Greece. One of these breeds is the Greek Hound that is also known as the Hellenic Hound, Greek Harehound and Hellenikos Ichnilatis. The Greek Hound is a handsome breed but it does have a rather unique appearance. This dog has a rather long thick neck that is topped by a round head with a rectangular muzzle. The strong body is supported by long legs with oddly shaped feet.

The Greek Hound is an ancient breed. Greek writers have extolled the sensitive nose and the hunting prowess of this breed. This dog is an active hunter that is hunted alone or in packs. A Greek Hound is noted for a great stamina that allows the dog to hunt in any type of terrain – be it rocky lowlands or sheer mountains. This breed has a resonant voice that can be heard for miles. While chasing a prey, the dog constantly gives voice. The timbre of the voice changes to warn the hunter when a quarry is found. These are very determined and independent hunters. A Greek Hound would not allow a prey to get away. For its size, this dog is very fast, very courageous to face a wild boar and cunning and playful to chase and play with a quarry before directing it to its handler. This wiliness also indicated the stubborn temperament of this breed. This is a slow maturing breed and young dogs are known to be more stubborn. As training can be a challenge, the most suitable owners are those having sufficient dog knowledge and one that can be firm and patient at the same time. Rough handling would make this breed even more difficult to train. Once trained this dog will be a truly wonderful companion as it has an innate affectionate and outgoing personality. With no known genetic disorders, this breed has a life expectancy of 11 years.

The Greek Hound is a medium sized tenacious and active hunter with an athletic and robust body. Rather than for its physical appearance, the dog is valued for its fine nose, for its agility and power to catch its prey. However, the dog is not an ugly breed, in fact it does have an appealing appearance. This dog has a well proportioned conformation. The skull is of equal length to the slightly arched muzzle. The dog has a black nose with well opened nostrils, strong jaws and strong white teeth that meet in a perfect pincer or scissor bite. Brown eyes with tight eye rims have a lively and intelligent expression. Set on high medium length ears have rounded tips and hang flat against the sides of the head. A Greek Hound has a powerful well muscled neck that has no dewlap. The neck, the broad shoulders and the deep chest give the dogs longer than tall body a powerful appearance. The topline is long, the back is straight and the slightly arched short loin is well muscled. The well developed chest is deep, well let down to the level of the elbows. The ribs are slightly sprung and the lean belly is slightly tucked up. The not too long tail is set rather high. The tail has a thick root and tapers towards the tip. The tail is carried saber fashion when the dog is on the move. Forelegs and hind legs of this breed are straight and well boned, shoulders are muscular.

A Greek Hounds tight fitting skin is covered with short dense hair that is quite hard to the touch. Coat colors are black and tan. Varied tan shades are accepted by the breed standard. Some specimens may have a patch of white hair on the chest.

The Greek Hound is a hardy and active hunter noted for its resonant melodious voice. Although the breed has a good natured personality it is not solely kept as pets. This is because the dog needs to be hunted. Hunting is the prime reason for developing this breed. But the dog also has an affectionate and lively nature. Therefore it would be best to keep the dog as a companion and as a hunter as by then all the outstanding qualities of the dog would come to the fore. These are keen hunters and it can be safely said that this breed does not have a vicious bone in its body. This courageous dog is protective of its human family but it is also have a very friendly nature. The dog will not attack unless it is provoked and unless a danger to the family is sensed by the dog. As mentioned this breed is very friendly even to strangers. It is also playful and affectionate making it an ideal companion and playmate of the children. The dog would always jump at the chance to be included in the games of the children. This breed hunts singly or in packs, as such it tolerates other dogs in the household. A Greek Hound should not be trusted with non-canine pets as the dog would view these animals as prey.

A Greek Hound would not be a wise choice for an apartment dweller. This breed has extensive exercise requirements. This breed would need wide open spaces and would do best to live in a farm or in a rural area where it can be allowed to run and romp unrestricted by a leash. A Greek Hound that is not provided with the chance to have enough exercise will be hard to handle and can even be destructive.

A Greek Hound has an easy to care for smooth short coat. To maintain the good condition of the coat it has to be regularly brushed with a firm bristle brush. Too frequent bathing should be avoided so as not to remove the natural oils of the coat. Dry shampoo the coat instead. If bathing is really necessary, a mild soap should be used. Nails of the dog must be trimmed regularly. Being a hunting dog, the Greek Hound is prone to getting ticks and burrs from wooded areas. Inspect the eyes, the ears and the foot pads of the dog. It is a routine that must be done every time the dog has returned from hunting. Unattended thorns between the pads of the feet can get infected.

The Greek Hound is an ancient breed of scenthound whose roots dated back thousands of years ago. As with any ancient breeds, origin of the Greek Hound was lost in antiquity although it was believed that the progenitors of this breed are the ancient laconikoi kynes. These dogs are native to Peloponessus or Southern Greece. The Greek Hounds are black and tan dogs noted for being excellent trackers and hunters of hare. Ancient Greek writings praising this outstanding breed exist.

For thousands of years this breed has roamed the islands and has enjoyed the recognition of the hunters with relatively no competition. Because of the isolation of the mountainous regions of Greece no other breeds were introduced and the Greek Hound has remained pure. Features of this breed have remained unchanged and still resemble its ancient ancestors. Because of colonization and sea trade the breed became widespread. As ancient Greece covered a large part of the Balkans, the Greek Hound found its way to the neighboring countries. In recent years, the dog was taken all over the world by visiting sailors. Many other breeds of dogs have the genes of this ancient breed. In spite of being extant for thousands of years, this breed has not gained recognition from international kennel clubs. Partly it is due to the fact that there is really no formal dog breeding in Greece. Moreover dog shows are not really popular in this country. The Greek Hound is the very first breed from Greece to be recognized by an international dog breed organization. In 1996, this ancient Greek Hound was officially recognized by FCI.