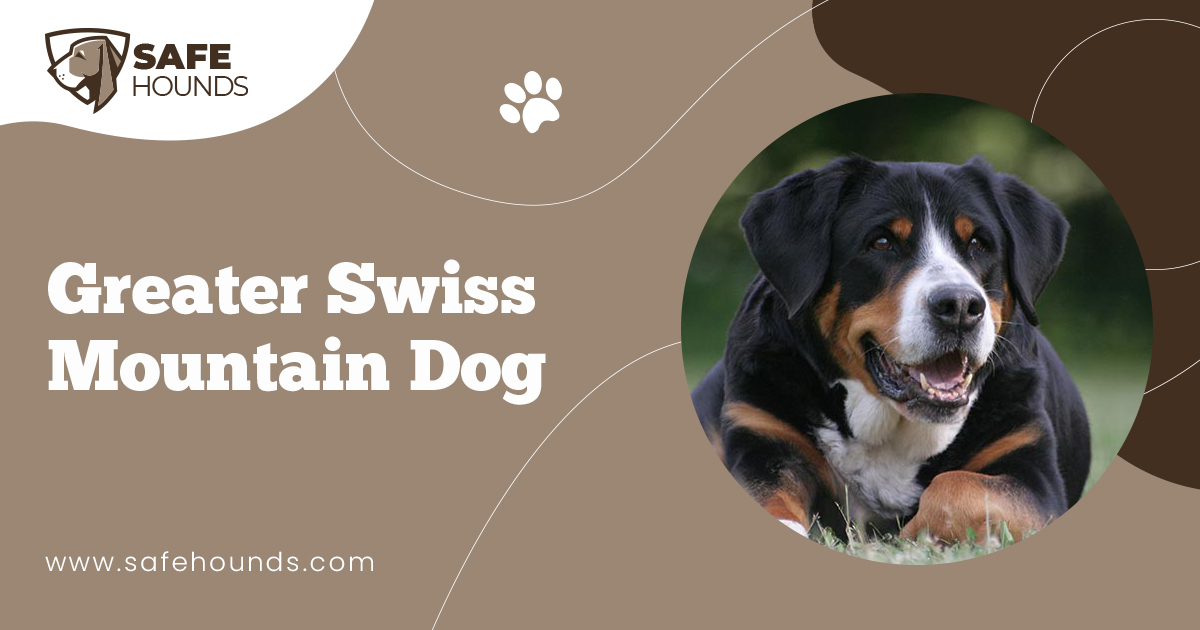 The Greater Swiss Mountain Dog is a breed that is one of the largest herding dogs. They say that it is something of a cross between the Saint Bernard and the Rottweiler.

When looking for a dog of this breed, you have to take many things into consideration. You need to know if your lifestyle will allow the time you will need to care for the Greater Swiss Mountain Dog. One thing to think about is that if you will have the time to take for training this breed. This dog needs to be trained to be raised properly to live a long and happy life.

When going out and walking your Greater Swiss Mountain Dog, make sure to keep in mind that this is a very strong dog to handle. They are very strong and walking them on a leash can be hard to do. Make sure to train them at an early age to be able to walk on a leash. Never let kids walk them by themselves on a leash because of how strong they are.

Greater Swiss Mountain Dogs are great dogs. Their herding ability and a cattle dog is a favorite of this breed. This breed is a good breed to have around as long as you can take the time with them that they need. As long as they have a devoted family that will give them the attention and the training, that they need then they will do fine. This dog can become distant from the family if they are not willing to give the love and attention that they need.

The Greater Swiss Mountain Dog is a breed that is much stronger than you might imagine. Their muscular body is large with a strong frame. Their body is a little bit longer than they are tall. Their feet are rounded with very strong straight legs. Their head should be the same length as their muzzle. Their muzzle is rounded. With this breed, the nose should be black as well as their lips. Their eye color can vary from chestnut to a hazel color. Their eyes show their intelligence as well as their thoughtfulness. Their ears are shaped like a triangle and they are medium sized. The Greater Swiss Mountain Dog has a long tail that reached back to their hocks.

This breeds coat has a double coat that is tri-color. The colors of this are black with a rich rust color with white markings. Their outer coat is no longer than 2 inches long. It is lined with an intense undercoat. Rust colors can appear on their cheeks, on one or the other side of their chest or with a spot over their eye. The white markings can appear on the tip of the tail, a large marking on their chest and on the muzzle in a blaze. The white color can also appear in patches on the neck as well.

The height of the Greater Swiss Mountain dog is between 23½ inches to 28½ inches high. Their weight is between 110 pounds to 154 pounds. This just goes to show how large these dogs can be.

The greater Swiss Mountain Dog is a dog to have when you are looking for a loyal, protective, and good companion. They can be a great watchdog because of their size and because they tend to be a bit protective of their family. They will scare off anyone that is not wanted at your home. This breed is pretty good with kids and other pets. This is one dog that will aim to please its family at any cost.

This dog will do all right in an apartment as long as they are taken out enough. They do not need exercise a lot but some exercise is needed. You do not need to have a large yard to please this breed. The Swiss Mountain Dog can do okay in a small yard or even just taken to the park for regular walks.

The Greater Swiss Mountain Dog is a fairly easy breed to tend to. This breed only needs a little bit of brushing. They shed on average like other breeds. This dog is very easy to train. You need to start training at an early age to get the best results with this breed.

This dog can use some exercise. Not a lot is needed but if you are looking for a cart pulling dog then this is the one for you. Using this dog for this kind of task will do them well for keeping them active and healthy. Otherwise, this is a very easy dog to take care of in life.

There are four native breeds from Switzerland and the greater Swiss Mountain Dog is one of them. The others are Appenzell Cattle Dog, the Entlebuch Cattle Dog, and the Bernese mountain dog. Only two of the breeds are even recognized by the American Kennel Club.

The Roman Legions invaded Switzerland around 58 B.C. and brought the mastiff with them. These dogs guarded the troops at night and herded during the day. Therefore, interbreeding started with the dogs that were running around the area and this is where the four different breeds came from.

During this time in history, breeding records were not kept. If a person a trait they believed would better the dog, they would breed. The breeding of farm dogs was of course with neighbors or farms that were near by. This made the dogs have a good temperament and the appearance became almost a permanent result. These dogs worked as herders, guard dogs, and because of the breeding became excellent family dogs.

During the 1860s the Swiss Mountain Dog was about the only breed around and that is the dog everyone desired to work on their farm. When machines started to arrive in the area, the dogs were not needed as much to work on the farms, and they began to fade away. By 1900, the breed had all but disappeared totally.

The Army started to use them as draft animals so they became more popular and were again becoming popular in the mountain regions of Switzerland. Today, there unbelievably there are not many registered. They came to the United States in 1968. Then someone formed a club called the Greater Swiss Mountain Dog Club in 1985. Finally, the American Kennel Club recognized the Greater Swiss Mountain Dog in 1995.