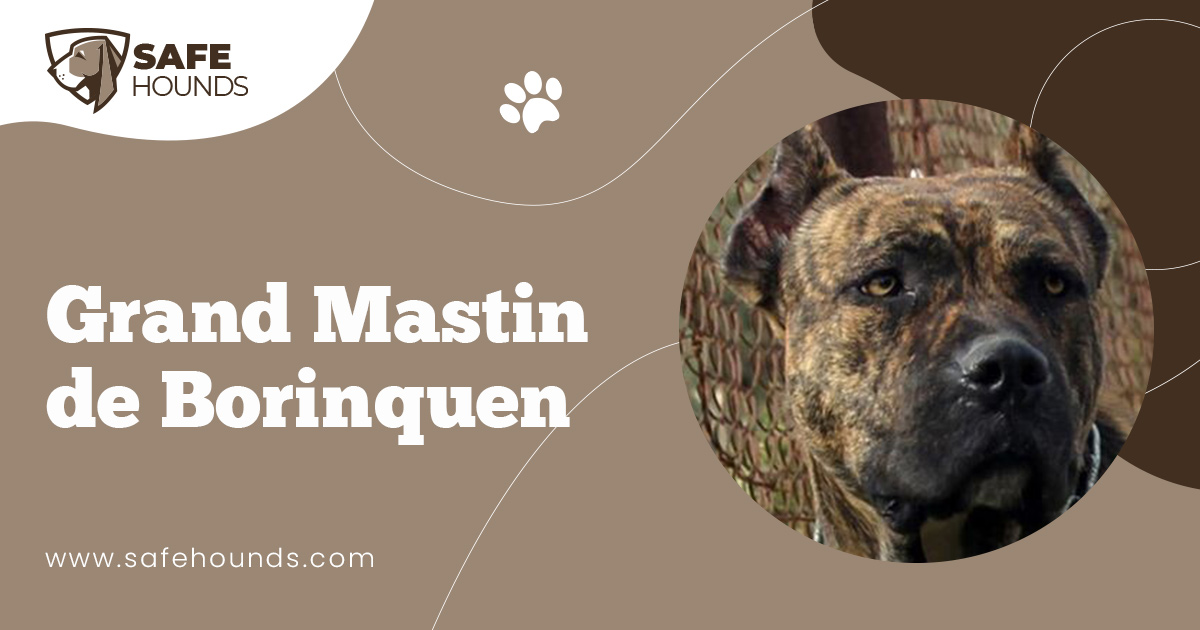 The Gran Mastin de Borinquen is the only breed of dog native to Puerto Rico. This breed is otherwise known as Puerto Rican Mastiff, Mastin Borincano, Becerillo de Borinquen and Perro de Barcino de Hacienda. This breed is said to have descended from the Spanish War Mastiffs, Latin American Molossers and the traditional island dogs known as Perros Jibaros. The Gran Mastin Borinquien is a magnificent breed. These are ferocious dogs. They are even described as blood thirsty. As such, they are commonly used by Spanish noblemen to guard their estates. This breed has also gained acclaim in blood sports. During the 16th century, at the time of the Spanish Encomendado, the dogs were utilized to enforce the reign of terror of the Spanish colonizers. These are large and very vicious dogs. The huge bulk would be enough to command fear. These dogs that are thought of as jaguars rather than dogs are feared because hundreds of natives and runaway slaves were mauled and killed by these dogs.

A Gran Mastin De Borinquen may have an intimidating appearance that would scare intruders but this is a noble and very loyal breed. The ferocious and vicious temperament is manifested by the dog to please its owner. This is an excellent breed of guard dogs. A Mastin is noted to be a hardy breed that can easily adapt to the harsh cold and wet conditions of Puerto Ricos rain forest and the hot temperature in the countrys plains and valleys. During the olden days, a Gran Mastin de Borinquen puppy can be easily obtained. Puppies can be acquired in exchange for produce, chicken, hogs or even with a friendly handshake. Nowadays, the Gran Mastin is hard to come by. This magnificent breed is extremely rare even in its country of origin.

The Gran Mastin de Borinquen is a massive heavy and robust breed. This dog has a majestic demeanor but it will never fail to intimidate people because if its fear inspiring appearance. This breed is a giant among dogs. A female weighs from 90 to 125 pounds and measures between 22 to 26 inches at the withers. A male Mastins height is between 24 to 28 inches and weighs from 100 to 150 pounds. The dog has a large broad head, a moderately long muzzle, a straight nasal bridge and a rather abrupt stop. During the early years of its existence, the Gran Mastin de Borinquen was utilized as war dogs. These dogs were used to capture and maul runaway slaves. The dog has the capability to bring down unruly steer and wild boar because apart from the immense strength, the dog is equipped with very strong jaws and strong canine teeth that meet in a scissor bite.

This breed has relatively small dark brown eyes with a dignified expression. Rather thin and small ears are set on high at the sides of the skull and hangs down close to the cheeks. The moderately long neck is robust and muscular. This breed has high withers, a level and straight back and muscular broad loins. The broad and deep chest has well sprung ribs. The tail that is thick at the base and slightly tapers to the tip almost reaches the hocks. The tail is either carried straight and level with the body or curled and held high over the back. Moderately long forearms are straight and strong. Hind legs have well developed muscles and moderately angled stifle and hock joints. Feet have thick elastic pads. A Gran Mastin de Borinquen has a short to medium dense coat that is rather hard to the touch. Coat color range from bone white, black, fawn and brindle. This breed may have small or large white marks on the head, chest, legs and tail.

The Gran Mastin de Borinquen is noted for its loyalty and its protective nature. The dog would do anything to please its master. It forms a strong relationship with humans but the dog is not recommended for families with very small children. The sheer size not to mention the rather unstable temperament of the dog is potentially dangerous to the children. Because of the huge bulk, the dog is not recommended for a person with limited physical strength. This breed definitely needs socialization and obedience training because the dog is noted to be aggressive towards other dogs. However, training can be a challenge. The dog is intelligent but it has a stubborn streak. Throughout the history of the Gran Mastin de Borinquen, it has been used as a guard dog. The Mastin is already a phenomenally strong dog with well developed protective instinct. Further training to be a guard dog will not be necessary lest the dog become too aggressive. The fear-inducing appearance would be enough to deter intruders. The slow and rather indolent movements are typical to mastiffs. The dog may prefer to lie around rather than to walk or run but an owner of this dog must ensure that the pet would have at least one hour of exercise everyday. This breed is not for apartment living not only because of the massive size but because the dog loves to be outdoors.

The Puerto Rican Mastiff is generally a very healthy breed. These dogs are expected to live from 9 to 12 years. The short coat makes grooming a breeze. The dog would not need extensive maintenance as weekly brushing would be enough to maintain the good condition of the coat.

The Gran Mastin de Borinquen is a large breed of mastiff type dog that is believed to have originated in Puerto Rico during the Spanish colonial times. This breed resulted from the crossbreeding of Perros Jibaros with Latin American Molossers and Spanish Mastiffs. Perros Jibaros are the traditional Puerto Rico island dogs. Spanish Mastiffs are the dogs brought to Spain by the Phoenician maritime traders around 100 BC. These dogs were originally utilized to guard livestock but were later on utilized as war dogs by the Spanish people. The Latin American Molossers were also used by the Spanish invaders as war dogs. With this war dog ancestry it is not surprising for the Gran Mastin de Borinquen to be referred to as blood thirsty dogs and to be utilized in blood sports and to be kept as protection dogs.

The history of this breed is deeply entwined with the Spanish colonization of the Caribbean and the Latin America. These dogs are noted for their incredible strength. They are highly capable of bringing down wild boars and feral steer. As mentioned, these dogs were used in blood sports. A Gran Mastin de Borinquen will fight other dogs till the end. These dogs have served as gladiator dogs of the Spanish conquistadores and in those days the quarry of these dogs are humans. During the early 16th century at the time of the Spanish Encomendado, these dogs helped in enforcing the Spanish reign in the colonized countries of Latin America. The Spanish Encomendado is supposed to be the introduction of Christianity and to bring cultural development to the remaining Taino population. However it was actually the enslavement of the natives. The brutalities committed by the Spaniards against the Tainos forced these natives to flee. The Gran Mastin de Borinquen dogs were used by the Spaniards in capturing the escaping Indians. The Tainos were often mutilated if not killed in the process.

Friar Bartolome de los Casas described these dogs as noble and courageous. The dogs blood thirsty nature comes to the fore out of loyalty and the desire to please its master. These dogs are noted to be very protective of their master. This was proven when Don Sancho de Arango was captured during a violent attack of the Carib tribe on the Carayabon River plantation in 1513. Don Sancho was saved when his dog Becerillo, a Mastin de Borinquen attacked and forced the Indians to release his master. The exploits of these dogs in the Spanish Indian wars are legendary. The king rewards the caretaker of these dogs with gold, food, slaves and other spoils of the war. In 1979 the Sociedad Cynologica Caribena (SCC) established this breed as an internationally recognized rare breed. These massive dogs are rarely seen today.