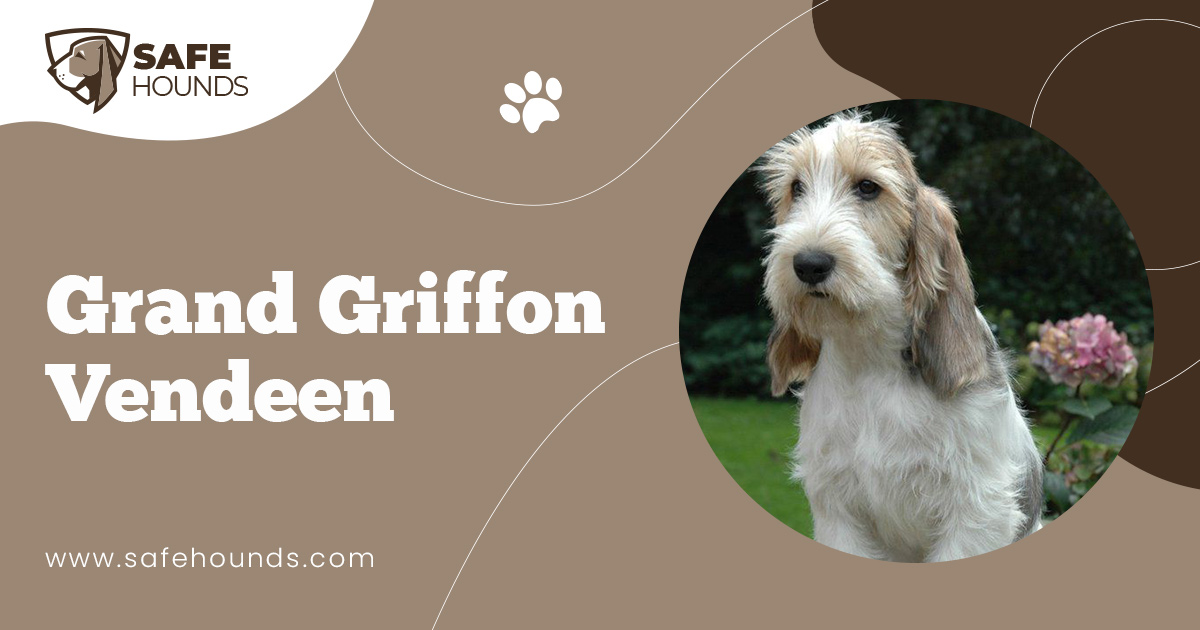 The Grand Griffon Vendeen is one of the four types of La Vendee hounds that existed in the 16th century. The La Vendee region on the western coast of France is the place of origin of this outstanding hunting breed of dog. Among the four Vendee hounds, the Grand is the largest and reputed to be the oldest as initially only the Grand Griffon Vendeen exist. This breed is believed to be a descendant of the Saint Hubert Hound and the white and tan dogs from Italy. It was speculated that the Nivernais Griffon was also introduced for added endurance and stamina. The Griffon Fauve de Bretagne, the Chien Gris de St. Louis as well as the Griffon de Bresse have all made contributions to the creation of the Grand Griffon Vendeen. The Grand Griffon Vendeen is a courageous and tenacious hunter. This breed was originally developed to hunt wolves and wild boar. This breed is an excellent scent hound that is used by hunters for hunting roe deer, foxes and other large game with or without a gun. Because of the excellent nose the dog is often used as a limer. The dog is kept on a leash while following a cold trail. This breed enthusiastically hunts individually or in packs. The dog is a tireless hunter, one that would never baulk at thorny strewn undergrowth, rough or difficult terrain and one that would not think twice to enter the water to pursue a quarry. This hound possesses a keen nose and a loud baying voice that is not unpleasant to the ear. The Grand Griffon Vendeen is a noisy hunter, it loves to hear its voice while pursuing a prey. This trait is most beneficial for the human hunter as the sonorous barking points to the hunter the location of the dog and the prey.

This breed has a well constructed robust body and a distinguished demeanor. The beautiful coat gives the dog an impressive appearance. The dog is a hunter. This active, strong willed and independent hound would always love to hunt whenever given the chance. However, this is not the only reason why the dog has earned the affections of people. The dog is cherished for its good natured personality.

The Grand Griffon Vendeen is an ancient breed of scenthound. This dog is an active and tenacious hunter. The dog has a fine nose as well as a beautiful melodious voice. Apart from these qualities, the dog has a well proportioned body, an impressive coat and a supple and even gait. This handsome breed has a well domed skull and a straight and slightly convex muzzle. Strong nose with well opened nostrils can either be black or brown depending on the color of the coat. Pendulous lips well cover the lower jaw giving the muzzle a squarish appearance. Dark colored eyes are bright and large although the conjunctiva is not really apparent. Well pronounced eyebrows do not cover the eyes. Typical of a French scenthound, the Grand Griffon Vendeen also has long ears that extend beyond the tip of the nose. The supple narrow ears are covered with long hair. Ears that are set below the level of the eyes hang down beside the head. This breed has a strong scissor bite.

The dogs elegant neck does not have a dewlap. The solid back is straight and the loin is well muscled. The chest may not be very wide but it is deep reaching the level of the elbows. The high set tail is quite long, has a tick base and tapers progressively. The tail is carried saber fashion. This dog has a straight powerful well boned forelegs, long muscled thighs and strong hind legs.

A Grand Griffon Vendeens skin is supple but not too fine. Tricolored individuals have marbled skin. This breed has long bushy top coat that is quite harsh to the touch and a dense undercoat. The muzzle is well covered with moustache, the eyes have pronounced eyebrows and the belly as well as the insides of the thighs are well covered with hair. A black coat can have white spotting or tan markings. White and orange dogs have fawn coats with white spotting. Tricolored individuals have fawn coats with black mantle and white spots. These coat colors are commonly called hare colour, badger colour, wolf colour and wild boar colour.

The Grand Griffon Vendeen is a through and through hunter. This breed would always jump at the chance to hunt. However, in recent years the dog has found another occupation. The dog has become a much loved home companion. The dog has an attractive appearance but what endears the dog to people is its lively and friendly temperament. This breed exhibits a docile personality. The dog makes a wonderful playmate of the children. It tolerates other dogs and pets as well. This is a friendly breed. The friendliness extends to a stranger that is if the dog feels that the stranger poses no threat to the family. However, this breed is known to be strong willed, independent and stubborn. Obedience is not one of the strong points of this breed. The dog is intelligent but training can be a challenge given that the dog may not respond well even if the training is conducted in a positive manner and the dog is lavished with praises and treats.

A Grand Griffon Vendeen is not a city dweller. A Grand Griffon is known for its penchant to bark thus apartment dwelling is not for this breed. This breed requires extensive exercise and a home with a large yard will be a most suitable living arrangement for this breed as the dog can run unrestricted with a leash. However, this independent dog loves to wander especially if it has found an interesting scent so the yard must be well secured with a fence and all possible escape routes must be securely sealed.

The Grand Griffon Vendeen is an adorable dog in spite of the messy appearance. The harsh coat protects the dog when hunting. This coat though would require consistent grooming. Regular brushing will remove dead hair and prevent the formation of tangles. Hair on the dogs feet needs to be regularly trimmed as well. Ears must be frequently checked for wax build up. Teeth brushing and nail clipping must be included in the regular grooming routine.

Vendee, a coastal region in west central France and south of the Loire River, the longest river in France is the home of some of the oldest breeds of hounds. The Vendeen hounds, a family of dogs that originated from this region is known to have a very long lineage. These dogs were developed from crossing southern hounds with the rough coated dogs that originated from Italy. It was speculated that the breeding of these dogs were started in the 15th century by one of the Kings recorders or clerks. The griffon in the breeds name was taken from the French word greffier which means clerk. The dogs that were developed were commonly known as greffier dogs, a name that was eventually shortened to griffon. Later on the name was also given to other breeds of dogs with wire coats. King Louis Xll was given several griffons. The dogs became the kings favorites as they have given the king so much joy. Because the dogs became the constant companions of the king the breed earned the name Chiens Blanc du Roi which means the Kings White Hounds.

The French Revolution has nearly caused the extinction of this wonderful breed. The Grand griffon Vendeen numbers tremendously declined when peoples taste for hunting dogs shifted towards foreign breeds. A lot of hunters favored the English breeds of hunting dogs. The breed is on the brink of extinction. Fortunately, at the turn of the 20th century, enthusiasts of the Grand Griffon Vendeen have decided to start a revitalization program by forming the first club in 1907. With M. A. Dezamy, the clubs president spearheading the program, the breed was revitalized.

With industrialization, hunting land in France and in other countries of the world became restricted. The Grand Griffon Vendeen whose hunting style is to follow the prey for hours is no longer suited to the limited hunting grounds. Nowadays the breed is considered to be quite rare. The Grand Griffon Vendeen still exist and hunts in France but it is unknown outside its country of origin. The dog is an outstanding hunter but it also has an even tempered personality making it a wonderful family companion.