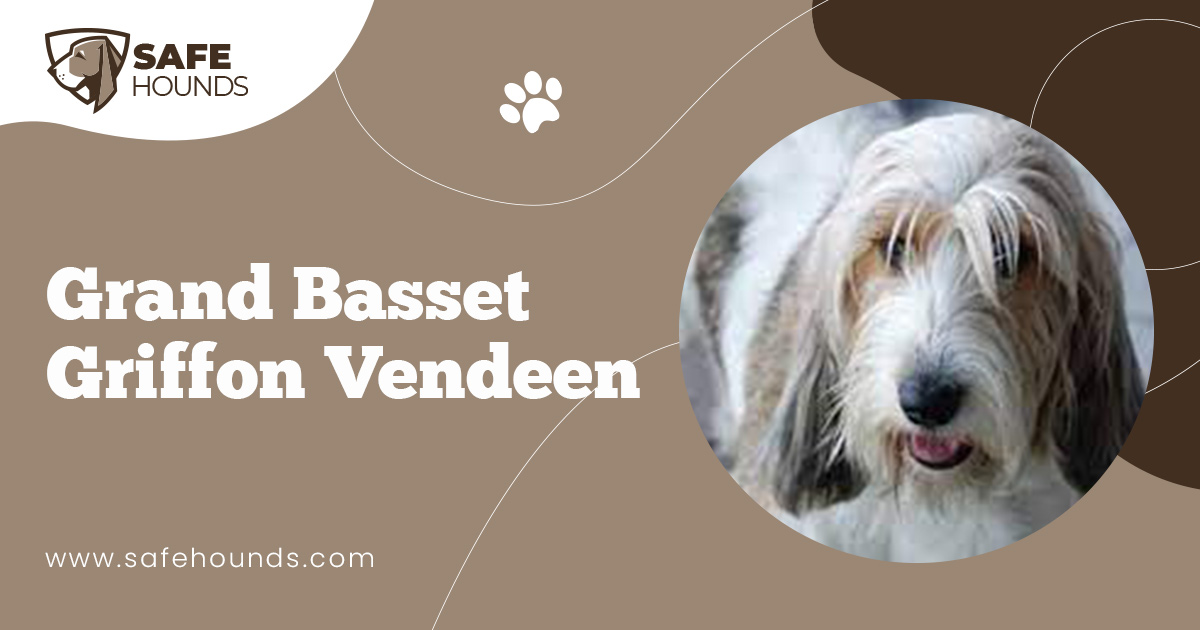 Basset is the Latin word for low. Grand Basset Griffon Vendeen for a medium sized dog, the name is rather a mouthful. Grand, because it is bigger than the other Basset, Basset, because the dog is low to the ground, the body is 50% more than the height, Griffin is for the wiry coat and Vendeen is for Vende, a state in France where the dog originated.

Centuries ago, this dog was developed when hunting became the passion of people in France. Hunting was tagged as the Sport of Kings. The nobility on horseback using swift big hounds would hunt deer, wild boar and other big game. Poor hunters of smaller game like rabbits and hare are usually on foot. And as such they would need a slower hound which they can easily follow. And the best way is to breed a shorter legged dog so that speed will be restricted. After several interbreeding, the ancestors of the GBGV were developed- a dog that was low to the ground, rough coated and an excellent hunter.

A GBGV is first and foremost a tenacious hunter, although the dog has evolved into an excellent home companion it still manifest the inherent characteristics of a hunter. This breed is an excellent scent hound and when it scents anything that moves, no amount of the owners call can make the dog come back. The owner must understand the inherent hound instinct of the dog and take the necessary measures to prevent the dog from straying that can result to the dog being lost or injured in accidents. The dog would dig tunnels and scale a fence in order to follow an interesting scent. Making sure that the area is secure is part and parcel of owning a GBGV.

Being pack animals, it is imperative to show the dog who is the alpha male. This breed is not for a faint hearted owner who will give in to the demands of the dog. These are independent and highly intelligent dogs, one that would show their dominant behavior if allowed to think of their importance in the pack. At the very onset of owning the dog, it must be made to understand that it is at the bottom of the pack and below all the family members.

A Grand Basset Griffon Verdeen is a short legged medium sized well balanced dog with a noble appearance. The wide and elongated head that is carried proudly has a slightly domed skull. The long muzzle is square at the edge and topped by protruding nose with well developed nostrils. Nose color may be black or brown. The dog has large oval shaped dark eyes with an intelligent and friendly expression. Supple and narrow ears with oval tips fold way below the level of the eyes. Dogs jaw is strong with a complete set of teeth that meet in a scissor bite. The head is profusely covered with long hair. The dog appears to have a beard and moustache. Eyebrows though do not obscure the eyes.

The body is 50% longer than the height, with a level top line and a well muscled loin. The neck is long, strong and thick at the base. The dogs set on high tail is long, with a tick base and tapers gradually. Like the rest of the body the tail too is profusely covered with hair. The tail is carried proudly, straight and saber-like never bent or curled at the tip.

GBGV has a double coat, the undercoat is dense and soft, the outer coat is of moderate length, wiry and rough to the touch. White is the predominant coat color with combination of orange, lemon, sable and grizzle. Some GBGV have black markings, others are tri-colored.

Grand Basset Griffon Vendeen owners would always state that their pets are happy dogs. The sense of humor and the happy out going attitude of the dogs earned them the nickname the happy breed. These dogs are always alert, always ready to please the owners and always into anything so much so that owners often find their pets in tight spots.

GBGVs were developed to be enthusiastic and persistent hunters. Nowadays, these dogs have evolved into outstanding home companions that are both loyal and affectionate to the owners. These dogs are friendly and known never to have shown aggression. These dogs would easily adapt to any situation and would be friendly even to strangers. This is an enchanting breed that would easily fit in with the family life. They are good and gentle with children, always trying to please. The dogs can get on well with other dogs and even with other smaller pets if socialization was done while the dog is still a puppy.

The appealing appearance, the wagging tail and the friendly expression and the eager to please attitude can be deceiving. Being highly intelligent, these dogs are free thinkers and would be stubborn more so if they know that the master does not have a firm hand. Obedience training is imperative. As aforementioned, these dogs have an eager to please attitude and it is expected that they would easily adapt to training. A GBGV puppy should be introduced to many people and to varied situations to ensure that it would grow into a confident and well mannered adult dog. Training however must be one that will provide mental stimulation for the dog. Moreover, the training should be done in a firm consistent and positive manner. Harsh physical or verbal discipline will be ineffective as the dog may either cower in fear or turn a deaf ear. Treats coupled with sincere praises would yield more positive results.

A GBGV should be included in the family activities as if left alone for a considerable period of time the dog may get bored. Bored dogs are destructive dogs. This breed will manifest its boredom through destructive chewing, by trying to escape or by barking incessantly. The distinct voice of a GBGV can be heard even from afar. For sure neighbors will not appreciate the noise a GBGV will make. This is one of the reasons why apartment living is not for this breed.

A home in a rural setting with a fence secured yard would be more suitable as the dog would need to be exercised at least one hour everyday. If a yard is not available, the dog may be taken on long walks. A grand would be an excellent hiking companion but be sure to keep the dog on a leash. The scent of a prey will trigger the prey drive of the dog and once on a trail it would be hard to call the dog to come back. Mature GBGV would need a considerable amount of exercise but puppies should self-exercise. They should not be made to climb stairs nor allowed to join rough games lest their young bones and joints be permanently damaged.

GBGVs are easy to care for. Thorough brushing 2 to 3 times weekly would be enough to remove dirt and dead hair. Very little trimming is needed though eyebrows that gets too long can be trimmed. The genital area must be checked regularly, hair trimmed if necessary. Ears must be cleaned weekly and nails have to be trimmed regularly.

When Julius Caesar conquered the Gaul during the 1st century BC, he introduced rough coated dogs to the Celts. France is a part of the territories that was termed as Gaul by the Romans. These hunting dogs that were kept for sports developed the Frenchs passion for hunting. The fervor to hunt escalated into a grand scale and was even dubbed as the Sport for Kings. The GBGV is one of the descendants of the rough coated hunting dogs.

The GBGV can trace its origin from the Vendee region in France during the 16th century. Alone or in packs these dogs were used to hunt deer, wild boar and other big game. Hunting was usually done on foot as the rough and rocky terrain would be unfavorable to horse riders. Basset Griffon Vendeen was highly acclaimed by hunters during the 19th century. Because the dogs are quite small they can get through low bushes and the rough coat serves as protection against brambles. It was a common practice to interbreed the Petite and the Grand Basset Griffon Verdeen. It was only in 1975 that these kind of interbreeding were prohibited. Also during the 20th century the two Basset Griffon Vendeen were differentiated through the efforts of the Dezamy family. The Petite is smaller in size and with a noticeable crook on the forelegs. The Grand is larger and the forelegs are straight.