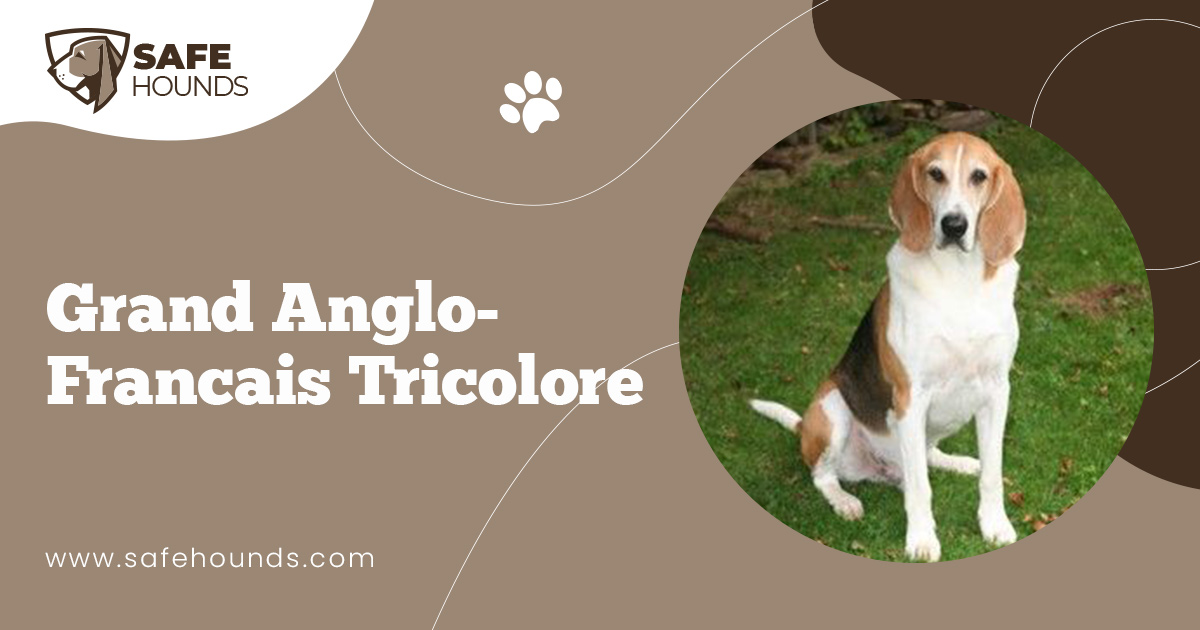 The Grand Anglo-Francais Tricolour has a long tail, long legs and long drop ears all typical hound characteristics. The grand in the name does not denote a large appearance as this is a medium sized breed. These three Grand French hounds are hunted in packs of twenty to a hundred dogs thus the grand refers to the large size of the pack as well as to the large game the dog hunts. These French hounds are noted for their speed, great stamina and for the great desire to hunt. These dogs will never be hampered by difficult terrain and adverse weather conditions as these scenthounds thrive more on the challenges offered by the hunt. The Grand Anglo-Francais Tricolore was primarily developed to hunt and how well the dog hunts! The dogs muscular and well balanced build as well as the eye catching tricolored coat does give the dog an impressive appearance but the real beauty of this breed lies in the effortless way it moves. This dog has a ground-covering easy movement. Hunters attest to the fact that watching the dogs pursue a wild boar or a roe deer is more exciting than taking home the hunted animal.

The Grand Anglo-Francais Tricolore is an intelligent breed. The dog trains easily but it can be rather stubborn. While hunting, the dog will be very obedient following the commands of the master but when it comes to training, the dog will decide which orders must be followed. These dogs make excellent companions but they are not for everyone. Prospective owners of this breed must have the time and the inclination to spend time with the dog otherwise, this well mannered pet will destroy property and turn into a difficult to handle dog.

The Grand Anglo-Francais Tricolore is a sporting breed that was primarily created to be a hunter. This medium to large sized breed is well equipped with a solid and muscular body. The dog has the typical long ears and long legs of a hound. This French hound has an elongated head and a moderately broad and flat skull. The occipital protuberance is slightly noticeable, the superciliary arches are slightly prominent and the stop is well marked. The muzzle that is of equal length to the skull has a generally straight nasal bridge but well chiseled under the eyes. Developed lips appear to be rather square but not snipey. Big brown eyes are rimmed with black. Medium length broad ears are set flat at eye level. This breeds strong neck is rather long and has no pronounced dewlap. The muscular body has a straight and well supported back. The broad well muscled loin is straight though quite short. Croup of good length is sloping. Broad and well let down chest has long and rounded ribs. The flank is slightly tucked up. This breeds long well furnished hair is carried elegantly.

A Grand Anglo-Francais Tricolore has long and flat shoulders as well as strong perfectly straight forequarters. Thighs are well muscled and the slightly bent hocks are well let down. This breed has a short smooth coat. The undercoat is soft and fine and the outer coat is rather coarse and harsh to the touch. Coat colors are black, white and tan. These dogs commonly have a black blanket. Black and tan patches are spread all over the white base coat.

This breed is loyal and obedient to the hunter. Generally, the dog is not recommended to be kept as pets as they are normally kept in packs and may not adapt to living with a family. Of course dogs of the same breed would have different personalities. Some breed fanciers attest that if properly socialized and obedience trained, the dog can get on well with children. This breed tolerates other dogs but it can be dangerous to other pets because of its high prey drive. This tricolored French hound is full of joie de vivre thus it should not be kept in an apartment or in a home in the city. This dog requires a lot of physical activities. Dogs that are cooped inside the home will be hyperactive and hard to control.

The Grand Anglo-Francais Tricolore has a short smooth and harsh coat that is shed moderately. This coat type makes the dog a low maintenance breed. The Grand Anglo-Francais Tricolore is a hunting dog thus rather than for the appearance, the dog is valued for its working abilities. Nevertheless, the dog would still benefit from occasional grooming. A once a week brushing would be enough to maintain the good condition of the coat. This hunting dog loves the water thus it would need regular ear cleaning especially because the ears are drooping. Unlike pricked ears that are air-dried, drooping ears tend to be moist if not cleaned and dried after the dog is hunted. Ear cleaning must be done to prevent ear infection.

Scenthounds are hunting dogs that make use of their exceptional scenting abilities to hunt. Generally, hounds are equipped with long legs and pendant ears. These are invaluable assets that allow the dog to scent and to trail the prey successfully. A Grand Anglo-Francais Tricolore is a scenthound. This breed along with the other two Grand French hounds was developed in the 1800s in France. Crossing French hound with English Foxhounds was commonly practiced in France since the 16th century. From these crossing seven breeds of distinct sizes, coat types and coat colors were developed. These hounds were highly valued by French hunters because of their excellent working abilities. These dogs are serious hunters that probably love hunting more than the human hunter does. Due to the varied ancestry, these hounds are commonly referred to as bastards in France. The dogs were never separated into distinct breeds as what was given importance is the dogs working abilities. In 1957 fanciers have made an effort to classify the dogs according to origin. The size, the coat type and the coat color were also taken into consideration. Dogs with French origins have to have the name Chien Francais and those with English and French origin have to have an Anglo-Francais name. The name Grand Anglo-Francais Tricolore was given to the breed with black white and tan coat coloring. Grand was added to the name not because this breed is large in size but because these dogs were utilized to hunt large game. Moreover the grand also denotes the fact that these dogs are hunted in large packs.