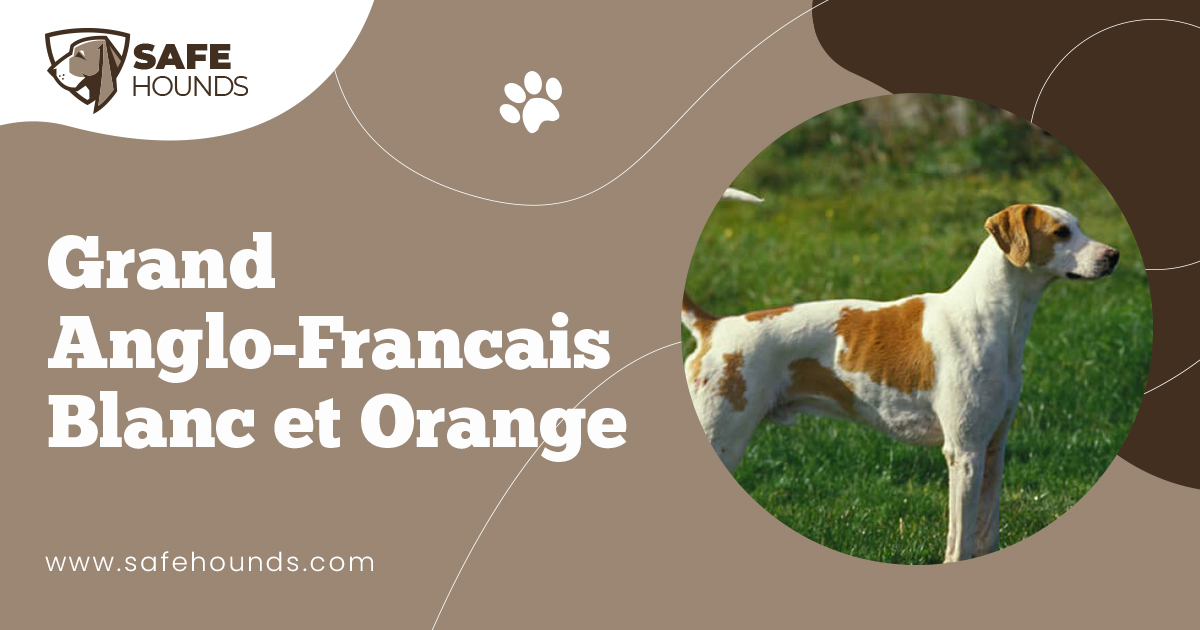 The Grand Anglo-Francais Blanc et Orange hound has the typical large build of an Anglo-Francais hound. The dog is rather lean but it has a muscular body that denotes immense strength and stamina. Slightly smaller than its cousin the Grand Anglo-Francais Blanc et Noir, this white and orange coated hound measures between 23.6 to 27.6 inches at the withers and weighs from 66 to 79 pounds. The well balanced conformation and the predominant white with orange or lemon colored patches gave this breed an elegant appearance. A Grand Anglo-Francais Blanc et Orange hound has an easy and effortless gait. Watching this dog tenaciously pursuing a roe deer or a wild boar would be an exhilarating experience. These dogs are highly valued by hunters in France as it has adapted well to the countrys methods of hunting. The full cries, the speed, the eagerness to hunt these are the qualities most valued by the French hunters. This hound is a serious worker, one that seems to enjoy the hunt more than the human hunter does. These very fast dogs have an excellent sense of smell. They can hunt in any terrain under varied weather conditions because they are well protected by their weather resistant coats. This breed has a calm temperament but they are not recommended to be kept solely as pets. These dogs have been developed to hunt in packs. A Grand Anglo-Francais Blanc et Orange would be happiest if allowed to live in a kennel with other hunting dogs.

A Grand Anglo-Francais Blanc et Orange stands between 24 to 28 inches and weighs from 66 to 79 pounds. The dog has a rather short but broad head. The slightly broad and flat skull has no occipital protuberance. Superciliary arches are not prominent, the stop is well marked. Muzzle that is rather longer than the skull has a rather short nasal bridge. The muzzle appears to be somewhat square because the lips extend over the lower jaw. This breed has big eyes that are either brown or darker in color. The well developed nose is either black or orangy brown in color. Ears that are set at eye level or slightly higher are rather broad and thick. Medium in length, the ears that end in a point are slightly turned in. The straight muscular neck may have a slight dewlap. A Grand Anglo-Francais Blanc et Orange has a muscular well built body. This breed has a broad muscular back, a broad but rather short loin and a narrow well let down chest. Long ribs are slightly rounded and the flank is well filled out. The rather long tail is covered with longer and coarser off-standing hair towards the tip. The short smooth coat of this breed is not particularly thick. The predominant white coat color has lemon or orange patches.

The Grand Anglo-Francais Blanc et Orange is a loyal and obedient breed. It can be trained into an excellent companion but these dogs would be happiest when they are hunted when they are in the field and chasing a wild boar or a roe deer. This is why the dog is not recommended to be a house pet. The dog will be kind and patient with the children but it should not be expected to be playful because it has a rather serious personality. Hunted in packs, the dog is accustomed to interacting with other dogs thus it would not be aggressive with other canine pets. This dog will not do well in apartments. A home in the country or one with a large yard will ensure that the extensive exercise requirements of the dog will be satisfied.

The Grand Anglo-Francais Blanc et Orange was specifically developed to hunt. This breed therefore is expected to have limitless energies. This is one of the reasons why this breed is not recommended to be kept solely as pets. This breed must be regularly exercised but walking the dog around the block would not be enough. The dog must be hunted or a large yard must be provided to allow the dog to expend its excess energies. This French hound would not require extensive grooming. Occasional brushing of the short smooth coat would be enough to maintain the good condition of the hair. This breed is an average shedder. During shedding season, grooming must be done more frequently not only to remove dead hair but also to accelerate the shedding process.

Cross breeding between French and English hounds were commonly practiced during the 16th century. Even the French aristocrats were known to cross their hounds with foreign breeds to improve not only the appearance but also the hunting abilities. A variety of these French hounds were developed. In the early 1800s these hunting hounds have already gained a foothold in French hunting. The hounds have adapted well to the rather unique method of French hunting. Hunters in other countries make use of firearms and other hunting devices to bag a prey. French hunters however, depend on the hunting prowess of the hound. The Chasse à Courre and the Chasse à Tir are French hunting methods where the excellent hunting abilities of the hounds are showcased. In the Chasse à Courre, the pack of hounds will chase and kill the prey. In the Chasse à Tir, the pack circles the animal and chases it towards the waiting hunter. In 1957 it was decided to change the name by which these hounds are known. Anglo-Francais was added to the name of the hounds that were developed from the French hound and foxhound crossing. The seven dog breeds that were described under the Anglo-Francais hound name were classified according to size and coat color. Grand was added to the breed name of the three Anglo Francais breeds not because the breed is exceptionally large in size but because they are commonly hunted in large packs. A pack of Grand Anglo-Francais Blanc et Orange usually consist of 20 to 100 dogs.

As mentioned, the Anglo-Francais hounds were develop from French and English hound crossing. The Grand Anglo-Francais Blanc et Orange was particularly developed when the Billy was crossed with a foxhound. All the Anglo-Francais hounds are similar in appearance but the Blanc et Orange manifests its English foxhound ancestry more than its black and white and tricolored cousins. However the Grand Anglo-Francais Blanc et Orange hound share with all the other Anglo-Francais hounds the excellent scenting ability and the immeasurable desire to hunt. These dogs live for the chase. These serious hunters will be unmindful of the difficult terrain and the unfriendly weather condition as they will stay focused in finding the prey. These dogs have an effortless gait that will cover large distances in no time. The Grand Anglo-Francais Blanc et Orange is the ultimate hunting dog. This breed is considered as a roe deer and wild boar specialist although they are also known to hunt foxes and other smaller game. This breed was recognized by the French Kennel Club and by the United Kennel Club when it was exported to North America. The breed was also officially recognized by the Federation Cynologique Internationale. Unfortunately, this outstanding breed of hound is extremely rare and seldom seen outside France, its country of origin.