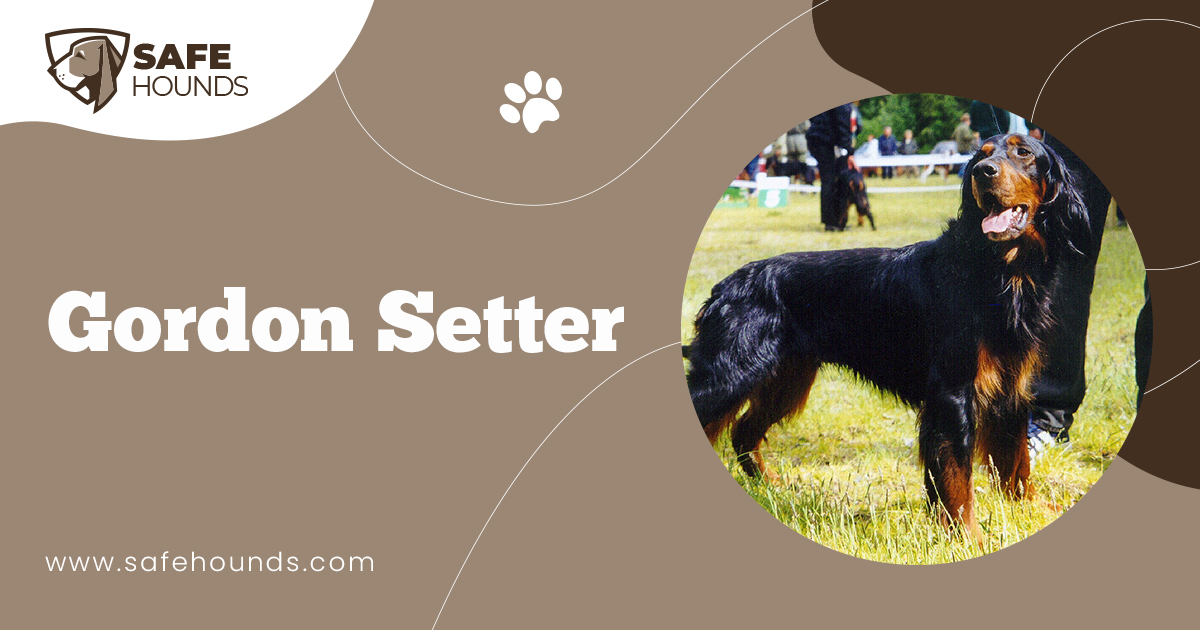 The Gordon setter is different from the Irish or English setters because their heads are larger and their lips are fuller. The coat of the Gordon Setter is the only breed with the black and tan color. They are heavier and the coat is thicker than any other breed of setters.

They are very energetic and need a lot of running room so a big yard is a must for this Gordon Setter. They are a very obedient dog and easy to train. They are excellent with kids also.

They will be leery of strangers until they know if they belong or not. He is a very loyal family dog and is devoted just to you. He can get along with other pets but he gets jealous easily.

Train them early on because once bad habits start they will be hard to break and this breed is one for bad habits if not nipped in the butt right away. They are easy to train but do have a stubborn streak. Therefore, you have to be firm and persistent. You will want to introduce him to all things at a young age. If you have children and other pets make sure he gets to know them both. This makes them friendlier to all but with strangers, they have the wait and see attitude until they get to know them.

These dogs are usually 24 to 27 inches in height and weigh around 55 to 80 pounds for males and the female is usually about 1 to 2 inches shorter and weighs about 10 pounds less. These dogs are tall, thin and have a beautiful feathery coat.

They have beautiful brown eyes and show how expressive they are by looking into them. They have large ears that set back on their heads. Long muzzle starting thick and ending pointed just like the tail. The have a walk that says they are strong. Their neck is long and lean coming up to the head.

The coloring is chestnut, mahogany colored, or black and tan. Their silky coat hides a very muscular body that is more for endurance than speed. When walking they have their head held high and their tail will swish back and forth the whole time they are moving. It can be straight or wavy but never curls.

They have strong legs that flow down into cat like paws and they walk with a flowing motion hardly touching the ground, very smooth. They have superb noses and are not afraid to get into the brush whether thin or thick. They will find your downed bird, bring it right back to you, and sit ready for more.

They care about their appearance even if it is wearing a coat or sweater. If you have several dogs and they all have sweaters, but one, then that one will sulk and feel left out until you give him one. He then will jump around happily because he looks like the rest of them now.

The Gordon setter is a very smart dog and very affectionate. When it was first bred, it was for a hunting dog as you can tell from their high energy, but they make an excellent family dog that will love and protect you and the children to the death. They will get jealous of other pets, so you must start young letting them know they have to share you with other pets in the home. They are great watchdogs and their muscular body shows it, but not to the level of a Rottweiler or Doberman.

Training must begin early with the Gordon as they are strong willed and have a mind of their own. You must have a firm hand with them or they will walk all over you. They want to please their family so they will learn fast if firm.

Compared to the other setters, the Gordon has the most sense. This dog is usually a calm dog, but if he feels his family is in danger he will stand his ground. They need a lot of room to run while being trained or playing.

The Gordon is not an apartment type dog, they need a big fenced in yard to get their exercise. if they do not get their exercise, they will become unmanageable inside. Regular combing of their coats will remove excess fur underneath and prevent shedding all over your house. If training for hunting, check the fur for burrs and other debris in their coats.

You will want to bath only when necessary so as not to remove oil in the coat because this keeps it shiny. Trim up the hair between the toes, underneath, and clip the toenails.

Your Gordon should be on a healthy diet. You want them to be lean but not skinny. You want a thin layer of fat on the ribs when you pet them. Feeding them a nutritious meal when they are young will build up the bone density they need when older. Keep plenty of fresh water handy for them to drink whenever they need it.

In the 17th century, the black and fallow dogs are mentioned in history. The fourth Duke of Gordon, Alexander started his kennel at Gordon castle. His preference of the Gordons was the black and tan colored ones.

In training, he would not shoot over the head of any of his dogs until they were at least five years of age because they were still to rambunctious. The breeders today still uphold this training.

In 1875, the sixth Duke was created named The Duke of Richmond and Gordon. He started the kennel back up and it is said he had a rich breed that was very strong. His kennel closed in 1907 and a Mr. Sharpe bought the remaining stock. These colors were black, white, and tan.

The Gordon history goes way back to about two centuries, maybe even three. The late Duke of Gordon made the breed the excellent breed it is today by perfecting it. Records of the first studbook covered from 1859 to 1874, there were 126 black and tan setters listed in it. In January 1924, the kennel Club accepted the name of Gordon setter for the breed and had it registered in this manner.

To this day, you can see the breeding that the Duke bestowed in the animal as it walks and carries itself. It has a certain regal quality when he has his head held high and looks at you. You can see in his eyes the majestic vision.