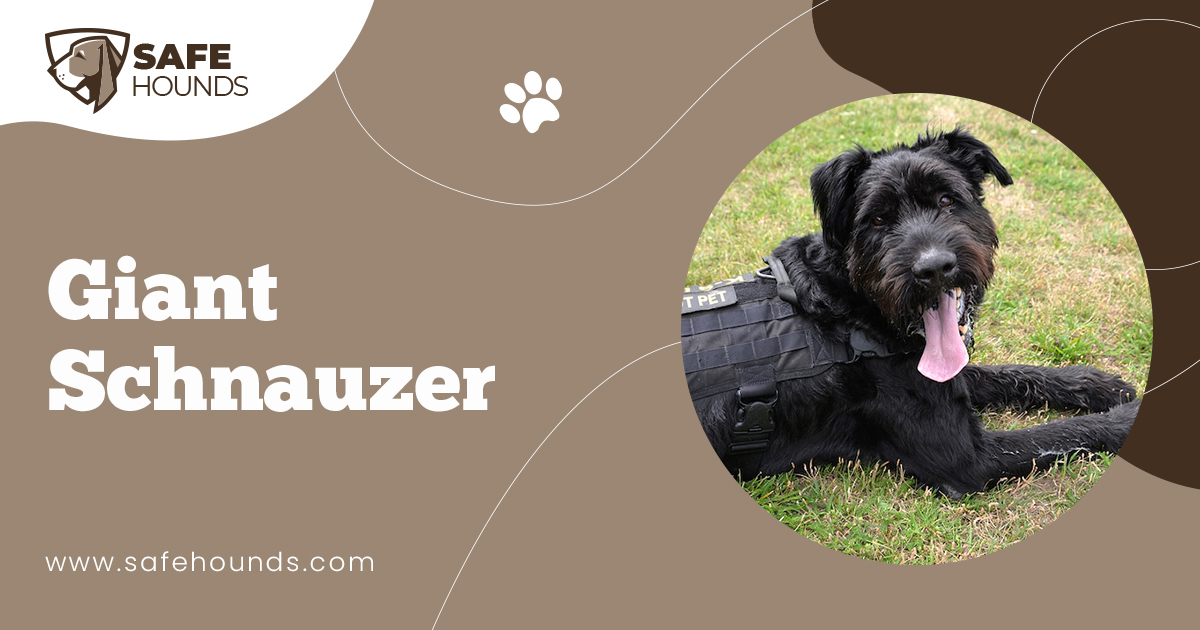 The Giant Schnauzer is a fun loving to dog to be around. They resemble the Standard Schnauzer only that the Giant is bigger. Otherwise, they are about just the same. This breed is known for being in the working class in dog shows. This breed has been used as being watchdogs, stock dogs, military watchdogs, and much more. This breed is very popular with many breeders.

When thinking of getting this breed of dog, you might want to think about the time you will need to take out for this dog. The Giant Schnauzer is a very active dog and loves to play. If you are the type of family that loves to be active then you are for sure to have a playmate to tag along for the fun. This dog needs to be walked or let out to run around for a good portion of the day. If they are not out playing and being active then you might have a pretty hyperactive dog that will not sleep at night.

The Giant Schnauzer is a good companion for the family that will give him tons of affection and love. Now if you have other pets around then you might want to make sure they will get along with them first. They can tend to be protective over other animals. If they are raised from a puppy with other dogs than you might not have to worry about it. This breed also makes for a great guard and watchdog. They will be sure to let you know if intruders are around your home.

This dog may be familiar to people with their bushy eyebrows, whiskers, and their unique beard. This breed is a compact size dog, but also large at the same time. They are also very powerful with their size. The giant Schnauzer looks the same, only bigger than the Standard Schnauzer. Therefore, if you know what the Standard one looks like, then you know what the Giant Schnauzer will look like as well, only with a larger body.

This dog has a wiry and harsh outer coat with a more dense and soft under coat. The coat comes in the colors of solid black or a salt and pepper color. Their nose is large and black colored. Their eyes are a dark brown color and in the shape of an oval. They have scissor shaped bite to their mouth. Their tail is normally docked. They get it docked to the second or third joint. Some owners may choose to crop the ears, but it is not something that is normally done with this breed. Their back and front dewclaws should both be removed.

The Giant Schnauzer is a loving, loyal friend, and companion. This dog loves to be active and play around. They can be rough to play with, so this dog might not be suitable for young children. The Giant Schnauzer can be a bit domineering if you allow this. You will have to train them as puppies or you may find your pet is the boss.

This dog does make a good guard dog. This is due to the fact that they are not very friendly with strangers, other pets and for some other dogs. Children can be around these dogs as long as there is supervision when the children are playing with the dog, as they tend to be play rough. This dog makes a great watchdog as well and if anyone enters your house, you will be the first to know with this dog around.

Having this dog around, you will not want to be living in an apartment due to the fact that, this is a very active dog and needs plenty of room to romp and play.

This breed loves to play. They are very energetic so they need a high amount of exercise and play sessions so they are not bouncing off the walls and they can sleep at night. So make sure to take them for a walk at least twice a day if not more.

Make sure to take a short wire brush and brush the undercoat of this breed, weekly so it does not mat up. Make sure, if there are mats or knots in their fur that you snip them out before brushing. When brushing, brush with the grain first then brush again going against the grain. A simple clipping all around the dog about four times a year is needed. Make sure to keep the ears and eyes trimmed. After the dog has had his dinner eating, make sure to clean their whiskers, as they tend to get dirty easily.

The Giant Schnauzer came around in the mid to late 19th century. Around that time, cattlemen were looking for a bigger breed of the Standard Schnauzer to use for herding and driving livestock. Therefore, they took a mix of the Standard Schnauzer, The Great Dane, the Bouvier des Flandres, and other rough haired sheep dogs and finally came up with the Giant Schnauzer. This breed became very popular, but some of the farmers who were low on money had a hard time feeding this breed because it took more to feed them since they were larger.

The breed then started being used for being guard dogs in breweries and stockyards. It was also a police dog and during World War I, they used the Giant Schnauzer as a military dog. When World War II started, the breed then started loosing popularity and was not being bred much. After the war ended, the dog then became a popular breed again when they were starting to be used as a drover and as a guard dog.

Over time, this breed became very popular while being used for all these different guarding tasks and then finally it was brought to America. Also during history, this breed was shown in dog shows all around the world. They are very popular when it comes to dog shows for their well balance and beautiful structure. This breed not only makes a good guard dog and such, but also makes a wonderful companion and has been doing that duty for centuries as well as guarding.