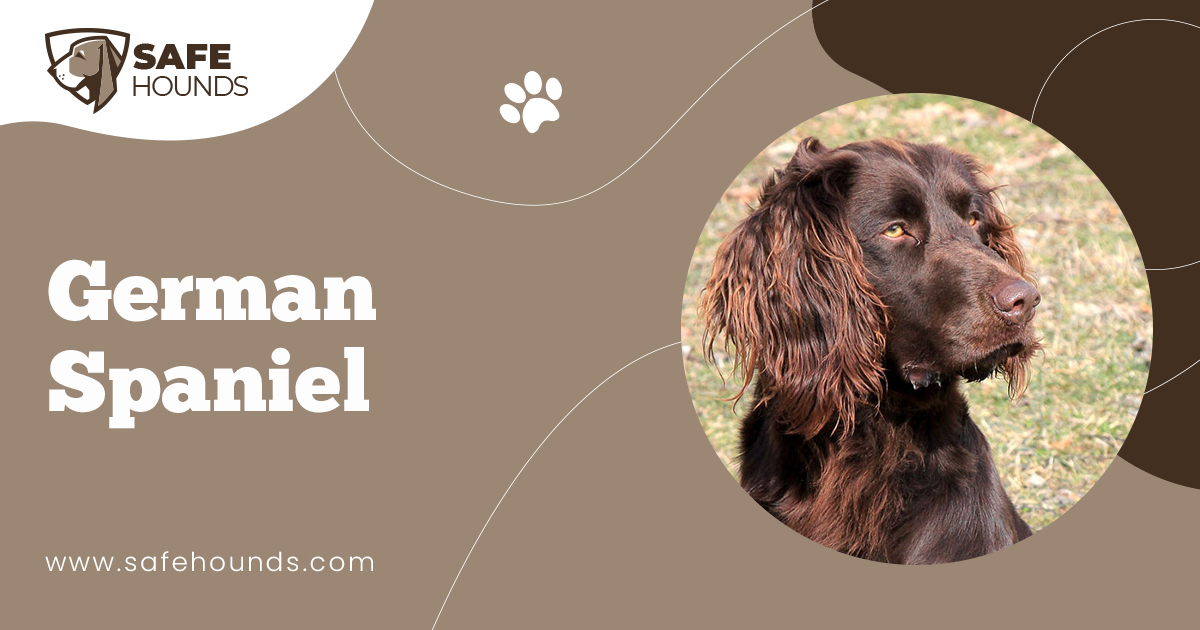 The German Spaniel is a sporting breed of dog that was created by Frederick Roberth, a German breeder. This is an extremely courageous and passionate hunter that is known to untiringly work in the forest, water and field. This is a working dog, one that is exclusively devoted to hunting. The dog may be loyal and obedient to the master, may follow all the commands but for this dog, human interaction is only secondary. Hunting takes top priority and being with human is only incidental. The German Spaniel was bred not for speed but rather to be a strong dog that will rummage in the forest.

This breed is an A one hunter that possess a bloodhound-like persistence when following the scent of wounded deer, elk and boar, the excellent nose of a hound that trails ground scent and the high nose of a Pointer that scents the air to follow far away scents. A German Spaniel is utilized to hunt furred and cloven hoofed game in upland areas and to hunt and retrieve waterfowls from marshes. The German Spaniel is a tenacious hunter but unlike a hound, this breed will instantly return to the master once called off a trail.

In Germany, this breed is known as Deutscher Wachtelhund, a breed that is most commonly sold to and utilized by foresters and professional hunters. This dog is classified as Stoberhund given that the breed has originated from the Stober dog. Even to this day, the German Spaniel is still considered to be a rare breed. A lot of average German citizens are not aware of the existence of this breed.

The German Spaniel is a medium sized gundog whose muscular and thick boned body is covered with thick long wavy hair. Dont be deceived by the size of the breed as the dog is an excellent hunter, strong willed and full of stamina and always willing to hunt in any type of environment. The strong compact body allows the dog to retrieve and carry heavy game such as foxes and hares. The dog has a deep oval shaped chest and well sprung ribs, a muscular but graceful neck and a tail that is set high on the croup. The well feathered tail is carried horizontally and forms an extension of the croup when the dog is on the move. An excited German Spaniel carries the tail a little higher and wags it vigorously.

The head of the dog is proportionate to the body. Medium sized oval shaped eyes are set wide apart. Eye color can be brown or hazel. Set on high wide flat ears are covered with silky long and slightly wavy hair which makes the ear appear larger than it actually is. Strong well developed teeth meet in a scissor bite. Large dark nose has wide open nostrils. The dog has a soft but dignified, alert and intelligent expression.

This breed has a thick, glossy and wavy long hair that lies close to the body. Coat colors can be brown or brown roan. Brown coated dogs can be ticked or can have white markings on the chest and on the legs. Brown roan may have a saddle over the whole back or may have red or brown patches all over the body.

There is not doubt that a German Spaniel is one exceptional hunter. This breed loves to work and as such they are most commonly kept by foresters and professional hunters. However, the dog that was once considered to be a through and through hunter has developed into a docile, adaptable and reliable home companion. This friendly dog will be the gentle and affectionate playmates of the children especially if the dog was socialized from an early age. This dog is an aggressive hunter but the aggressiveness does not extend to humans as the dog is friendly even with strangers. This is a dominant dog. Necessary socialization and obedience training must be started while the dog is still young so that it will learn to tolerate other dogs and smaller pets. Training however, can prove to be quite difficult as the dog has the utmost desire to work independently and would commonly manifest stubbornness.

A German Spaniel can be kept in a kennel but the dog would do well living in a house with the family. This is an affectionate and loyal breed that would thrive in a family atmosphere as the dog would require a lot of attention from the family members. These dogs can live in a city as long as given sufficient exercise. This means walking the dog for about an hour everyday. A German Spaniel has a strong prey drive. The dog must be kept on a leash if walked in a park to avoid accidents as well as problems with other peoples pets. In a rural area, a German Spaniel can be allowed to run off leash. These dogs unlike other breeds of hunting dogs would be easy to recall. In any case, this dog that is extremely loyal will return once in a while to check in with the master. These dogs love water so much. Frequent swimming will be a good form of exercise for the dog.

Frequent thorough brushing will maintain the good condition of the coat. As mentioned, these dogs love the water and they would appreciate showers especially during the hot season. During winter, the hair between the toes needs to be regularly trimmed. These dogs are excellent retrievers. They are prone to ear infection. Ears must be checked and cleaned frequently to prevent ear infections from developing. Likewise, eyes must be inspected and flushed after every hunting trip to remove foreign bodies like grass seeds and minute dirt particles.

The German Spaniel is believed to have existed for centuries. A dog with the same physical features and hunting attributes was mentioned in ancient hunting literature. Apparently, this breed of gundog was created by a German breeder named Frederick Roberth around 1890. Several small sized and medium sized long haired breeds were used in the development of the German Spaniel but what features most is the old German breed known as Stober. Stober is a German hunting dog whose origin dates back centuries ago.

During the 17th century, the hunting sport was an exclusive privilege granted only to the royalty. Only nobles can afford to maintain kennels. However, after the German Revolution, the common man was allowed to hunt. But as they can not afford the upkeep of kennels of specialized dogs, the German commoner have to develop a versatile hunting dog that will suit the hunting requirement of the common hunter.

The Sober is a versatile hunting breed that was mentioned in German hunting history as far back as 1719. This breed is known to have a scenting ability akin to a bloodhound. Existing specimens of the Stober were found in Bavaria. These remnants of the breed became the foundation of the German Spaniel. The Stober was bred with other water dogs and sporting spaniels that have excellent hunting abilities. The breeding resulted to the Wachtelhund (pronounced Valk-tel-hund). Wachtelhund means quail dog. In 1903 the Deutsche Wachtelhund breed was officially recognized. A club for the breed known as the Verein fur Deutsche Wachtelhund (VDW) was organized.

The German Spaniel is the only existing breed in the Stober category. This sporting breed possesses outstanding hunting abilities. A German Spaniel is an untiring hunter that unfailingly finds and recovers game. This breed is known for its fine nose that trails wounded game. A truly excellent breed that not only hunts feathered and furred game but one that hunts game several times bigger than its size like deer, elk and wild boar. This breed usually hunts alone. It is a passionate and aggressive hunter that will hold a smaller game with deadly grip and one that will keep a large game at bay until the hunter arrives. These dogs are seldom kept as pets. In Germany, the German Spaniel is owned and kept by foresters and professional hunters. This breed is rarely sold to non-hunters. The breed is relatively known outside Germany although in the late 1960s and early 1970s, several German Spaniels were imported to the United States. These dogs were bred and produced a total of 17 dogs. For the past 20 years the German Spaniels were owned by Canadian guides and hunting outfits. These dogs were used to track and flush black bear. Presently, there are about 100 German Spaniels in US and Canada. In 1996 the breed was officially recognized by the United Kennel Club.