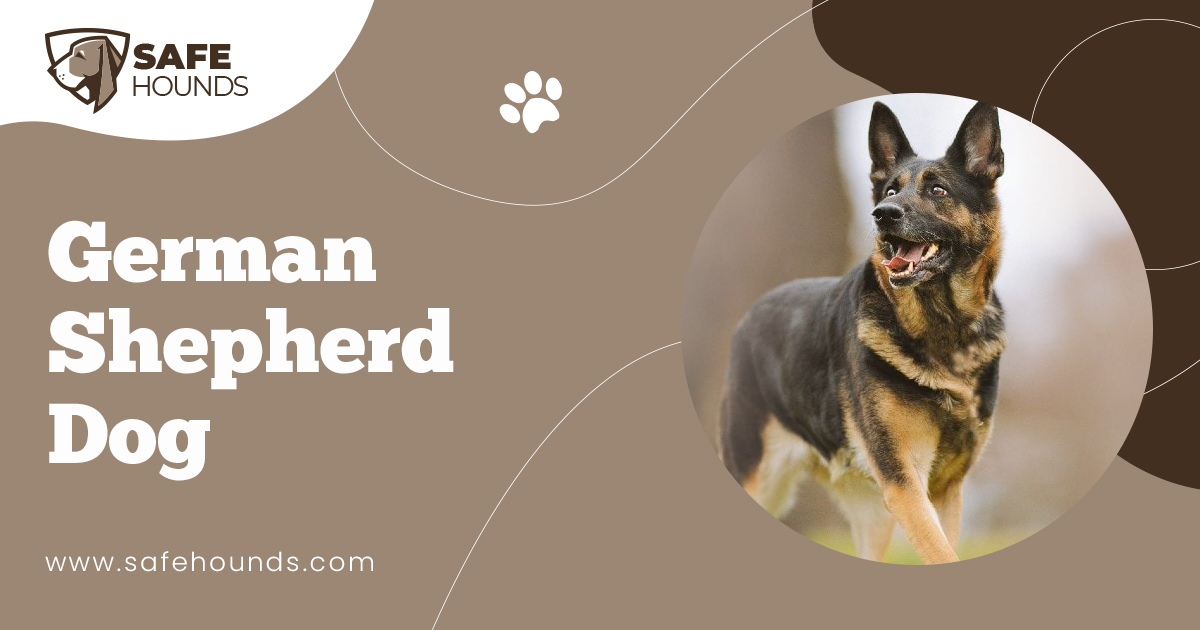 When you first see a German Shepherd, you think of a police dog. Over the years, they used German Shepherds but today they have also use Bloodhounds, Labradors and beagles. The German Shepherd is also a well-known movie star. The famous Rin Tin Tin is known by many people for his weekly series.

These dogs are also being used by the blind and have been trained to take them all over with out danger of being hit in the street when walking or getting lost because they know their way home. They are also used in the Military to sniff out drugs and many other things. The German Shepherd along with a few other select breeds helped the recovery efforts of 911 when they searched through the rubble of the Twin Towers.

The main colors for a German Shepherd are the black and tan but there is also a sable or all black and recently all white can be found. The white color was not recognized with the German Shepherd breed for registering however, it now has its own classification as the American White Shepherd.

The German Shepherd is a long, very muscular dog with a strong bite. The ears are held erect and high on the head. When you see them stand at attention, they are straight with their head pointed forward and both front feet together with the hind feet one behind and one forward. This is considered the most beautiful stance for the German Shepherd.

The coloring of a German Shepherd is usually the black and tan. Now other colors have been seen such as black and sable or all black ones. There are three main types for their coats. There is the rough-coat, the long rough-coat, and the longhaired. The newest breed apart from the German Shepherd is the all white one. Still a shepherd, but the American Kennel Club does not recognize it as one. It is however recognized by the WGSDCV, FCI, UKC, NKC, AWSA, APRI and the WSSDCA.

The body of the shepherd is long and flows out with a bushy tail but not over thick. The head is held high and sturdy and the body is muscular. His legs are strong and very muscular. they have very thick thighs. The rounded feet have hard soles. When they are standing their tail will droop down to the ground and when running they will have it straight back.

The German Shepherd is about medium size and should be about 23 to 25 inches at the withers with the females usually a bit smaller 21 to 23 inches. Males should weigh in at about 65 to 90 pounds and females should be 50 to 75 pounds.

The German Shepherds bite has been measured by Dr Brady Barr of the National Geographic, who has performed this measurement on many animals. he stated their bite is measured at having a bite of 130 to 238 pounds. Therefore, if they get a hold of you, then you know it will not be easy to get away from him.

The German Shepherd is a powerful dog and if not raised right they will be aggressive and dangerous. If raised right they are very devoted and a loving family member. They have a very strong sense of loyalty. They are very obedient when trained well. They seem to be very docile when approached but they are sizing you up as to whether you are friend or foe.

They only bark when necessary and should not be left alone for long periods of time. They need a large yard or be taken on 5 mile jogs. They have to have exercise to keep their hips in good shape. They should be around people quite a bit to prevent over guarding where they will become aggressive to others.

The German Shepherd is a very good breed that needs little care. They need to be exercised and not kept locked up in an apartment. They need a large yard to run in. They love to be worked or played hard. They learn very quickly when they are being trained.

This is a breed that sheds little bits of hair continuously. A daily brushing though will keep him or her beautiful. Baths should be scarce and only when needed to keep the oil in their coat. Keeping their nails trimmed only if they are inside dogs. Outside dogs will wear them down enough on their own with all the digging and running.

The German Shepherd is one of the most elegant breeds. You can see this when they are standing at attention. The graceful stance and their coloring are magnificent. You can see the intelligence in their expression.

The breed goes back as far as before the Roman Empire. The Germanic people bred their dogs for traits that they liked such as herding. This did not bring a very distinguishing breed of dog. It was not until Captain Max von Stephanitz resigned his command and went back to his first love, farming, did anything happen with the breed. He watched the dogs that some were using to herd and noticed they were too small for the job at hand. They could not keep the large flocks of sheep under control because of their size.

He started to think of the type that would be best suited for this job. The dog would have to be assertive, attentive, watchful, nerves of steel, and have a fighting ability if needed. in 1899, he started the Verein fur Deutsche Schaferhund, SV, German Shepherd Dog Club. His dog, named Hordand von Grafrath, became the first dog registered and became the model of all the other ones to come. He then went on to establish the rules of the dogs that were to breed. They had to be trained with certain specifications and then be graded and also be hip certified to breed.

Between 1899 and 1914, the breeders of the German Shepherds demonstrated how superior their dogs were in tracking and protection and soon they were sold for rescue work. Then in 1914, the German Army received some to use in their military. They were thought of as a joke at first, however, once their bravery and courage was seen on the battlefields, the military changed their minds in a hurry.

An American soldier found two German Shepherd puppies in a foxhole. The mother was nowhere to be found, so he decided to care for the puppies. His tour of duty was ending therefore he was free to bring the puppies back home with him to America. One of the puppies came down with pneumonia and died, however, the other one became the famous Rin Tin Tin. World War II was a blessing in disguise for the German Shepherd as the Red Cross used the breed to locate wounded or missing soldiers, thus the importance of the breed became known.