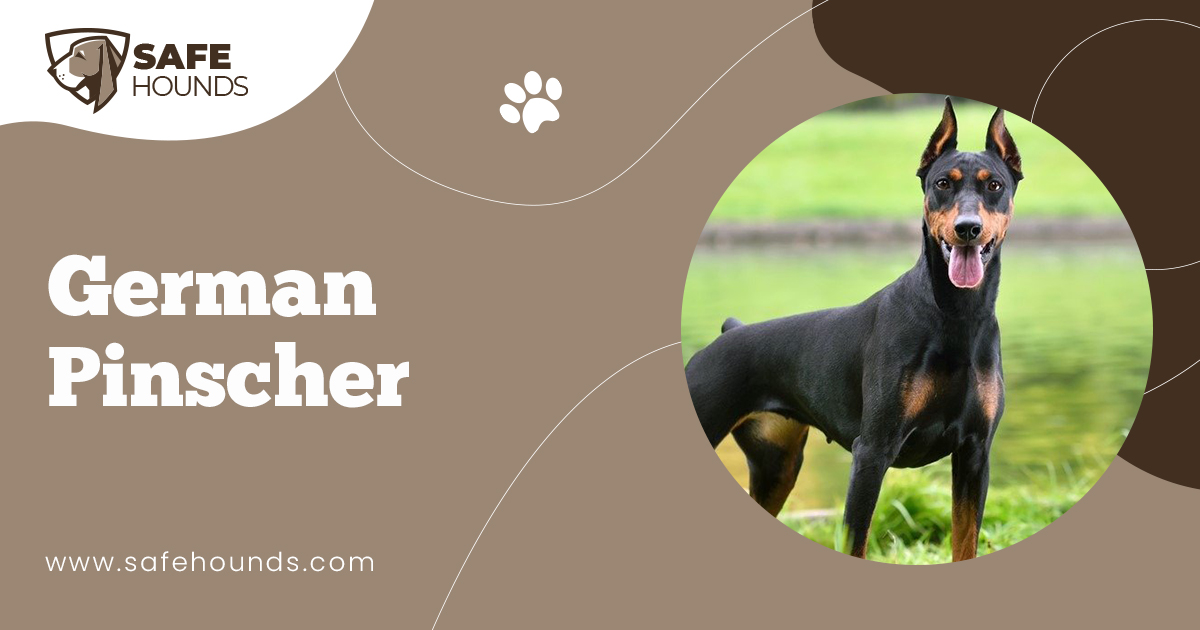 The German Pinscher comes to us from Germany and from a long line of various dogs. The origins of this dog are from the breeds Dobermann, the Miniature Pinscher, Affenpinscher, Miniature Schnauzer, Giant Schnauzer, and the Standard Schnauzer. Now if you think about the line of these dogs and the German Pinscher, you may see where it receives its looks.

The German Pinscher is a very loveable dog to have and is also a smaller dog. With the size of this dog it will work well for someone who is older or for someone who might not have a big house or yard for the dog to play.

In dog shows such as the AKC, this breed is listed under the working, utility and the non-sporting groups. This is because they have been known for their herding ability and their guardian ability. With both of these abilities they make a wonderful companion for anyone to have around.

This breed gets along great with other pets and is alright to have around children as well. With their very loving humor and also the ability to be brave, they not only work as a companion dog but also for being a good watchdog. This breed can be very vocal with their barking, but if trained not to bark that much then they will be fine.

With the German Pinscher, you will see a dog with an elegant and muscular build to their body. Their length is as long as they are in height. Their eyes are medium and oval shaped. Their eyes are dark. The ears on this breed can be cropped or un-cropped. When they are cropped, they will stand straight up. If they are un-cropped, they are folded with a V shape. Their tail is docked around the second and third joint. With being docked, the tail stands straight up at a point. With this dogs small size, it is perfect for anyone. The loving caring look that they give makes anyone fall in love with them.

Their short fur coat is smooth and shiny. The colors of this breeds coat can be red, black, fawn, blue, and bi-colored. When they are bi-colored, they have tan and red markings in spots such as above their eyes, their lips, the throat area, the fore chest, the cheeks, feet, pasterns, lower jaw, forelegs, below the tail and on the inner part of their hind legs. Back in the 20th Century there used to be the colors of solid black and the salt and pepper look. These two looks are extinct as of today.

The German Pinscher does not get along with other animals. It does not matter if it is another dog, cat, or any other pet. However, in some cases, they may be able to tolerate other pets if they are raised along side them.

This breed can be a good family pet, but it tends to get aggressive towards just about anything else though. This dog may be little in size, but it will try to take on larger dogs if it feels threatened by them. They can be threatened by strangers as well, but this can be avoided by giving them good socialization when they are young.

This dog can be a great watchdog and can be a passable guard dog. They are very good at not letting anyone go by without notice. The German Pinscher can be good with well-mannered kids. If the dog is being mistreated or harassed it can be a problem. Make sure to supervise your children when they play with the dog. This dog will do fine living in an apartment as long as it gets out and gets some exercise. If you take them outside to run around, make sure you have a good fenced in area, as they will run at anything they see.

This dog does not need a lot of care. Normal brushing is fine for this dog. They are just your average shedder and the brushing is needed just to get rid of dead hairs. Since they have a short coat, little trimming is normal for their fur coat. Normal baths are fine when they are dirty. This breed can stand the heat, but not the cold. Therefore, because of this, the dog should be an inside dog and not left outside.

The German Pinscher requires good healthy exercise. When biking they will jog right next to you. You can also take them out and play with them in the yard or for a walk around the block as well. Exercise such as this will keep your dog healthy.

From a painting by Frenchman, Malers Vernet it is estimated the German Pinscher has been in existence since around 1780.There were also other pictures found which included this breed in books that were found around 1884 as well.

In 1959, there were all the colors of coats we see today, however, there were also two colors that are now extinct. These colors were salt/pepper and black.

After both of the World Wars, the German pinscher was almost extinct as well as their color. Thanks to Werner Jungs help, he kept some of these dogs and started breeding them herself.

Around the late 1970s and early 1980s this wonderful breed of dog was starting be brought over to America. Americans started breeding these dogs in small amounts. Now as of today, these dogs are very well known with many people. This dog has a good right to be loved and taken care of because of the fact we almost lost this wonderful breed if it was not for Werner Jung and his sense to keep the breed alive and going. Today, there are clubs all around the world for the German Pinscher and the dog is also being seen in dog shows around the world. This breed is being shown in dog shows under the working, non-sporting, and utility groups. You might see this breed being shown under different groups as well.