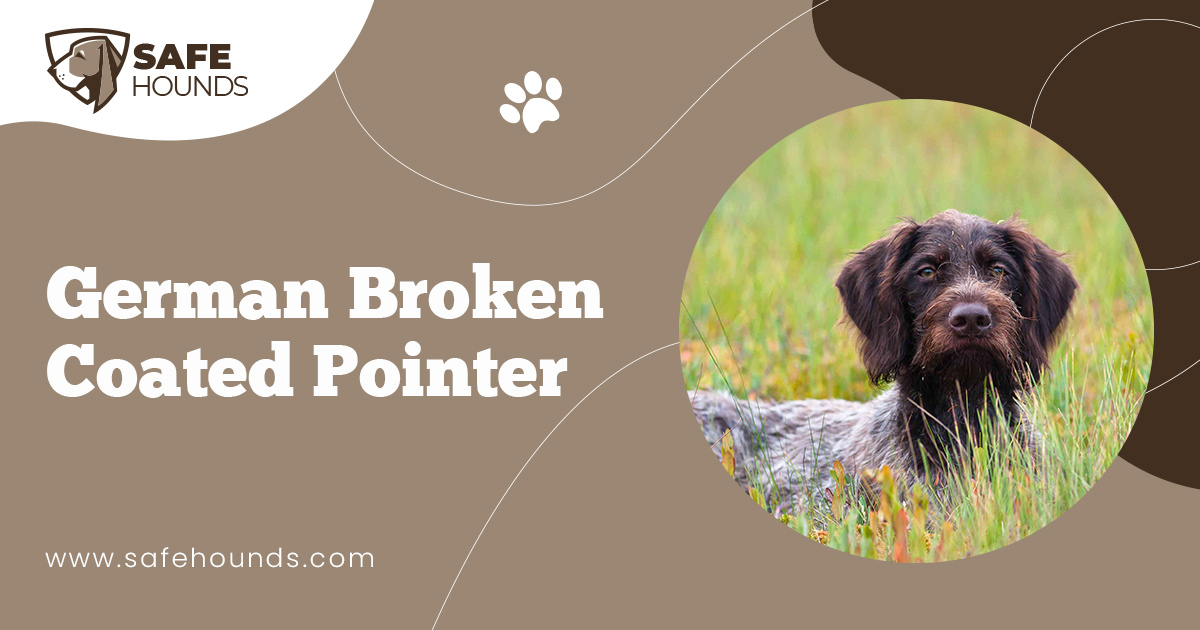 The German Broken-coated Pointer is also known as Deutsch Stichelhaar. Stichelhaar is a German word that means broken coated. This breed is probably the oldest of the German rough haired pointers. A need to create this dog arises when the German middle class were allowed to participate in the hunting sport. This is a rugged and powerful breed that is most valued for its hunting prowess. The German Broken Coated pointer is everything a hunter could ever wish for as this breed is equally adept in working on land and water. This breed belongs to the HPR group. The Deutsch Stichelhaar is a hardworking hunting companion, a reliable pointer and an indefatigable retriever that would not test the water before jumping in. This breed works the fields, the woods but loves the water more. German Broken Coated Pointer is dubbed water dog as it will retrieve and readily enter the water anytime with pleasure.

The most distinctive feature of the German Broken coated Pointer is the coat. This flat wire-like coat protects the dog from all kids of weather and shields the dog from the underbrush in the roughest terrain. The wiry hair readily sheds dirt like water. The coat is water repellent, you can actually see water literally dropping off the coat of the dog that has just come out of the water.

The German Broken Coated Pointers were originally bred as gun dogs in Germany. This breed is considered to be extremely rare but they are still utilized for this purpose. Because of the balanced temperament of the breed, it has evolved into wonderful family pets. This breed has a life expectancy of 12 to 14 years.

The German Broken Coated Pointer may not be a large dog but it has a sturdily built body that exudes power. The dog has a slightly rounded broad skull, a slightly pronounced stop and a powerful muzzle. Nose color varies from light brown to dark brown but never flesh colored. Medium sized slightly oval eyes are brown in color for dark coated dogs and lighter in dogs with light colored coats. The ears that are set on high have rounded tips and hangs close to the sides of the head.

A German Broken Coated Pointer is very similar in looks to the German Wire Haired Pointer. A lot of dog lovers can not point the difference given that even the hunting styles of both dogs are similar. The coat is the most distinctive feature of the Deutsch Stichelhaar. The coat is long enough to form an adequate cover for the body but not long enough to hide the outline of the dogs body. The coat is weather resistant as well as water repellent. The coat that is stiff and bristly lies loosely and grows about 4 cm in the same direction. Rough hair stands up on the rump. Slightly longer hair grows on the shoulders and the underside of the body. A slight feathering that grows straight downward is formed from the throat to the chest. Hair on the muzzle forms a beard. Standing hair on the eyebrows forms an oblique arch and gives the dog an angry look. The front of the forelegs is covered with flat lying rough coat. Longer hair forms a feathering on the backsides of the forelegs and the hind legs. The medium length tail that has a thick base is well covered with hair that lies close to the skin. The underside of the tail has longer hair though it does not form a plume. The tail is carried straight or slightly bent upwards. Coat color can be brown with or without heavy sprinkling of white hairs. Some specimens have brown roan or light roan coats that may or may not have brown patches.

The German Broken Coated Pointer is a robust and courageous hunting dog that is known to have a well balanced and calm temperament. This is a breed that forms a strong attachment to the master. In fact the dog would only take orders from its master. Socialization and obedience training that should be started the earliest time possible is necessary.

This dog may be wary of strangers but it is very friendly and docile to the people it considers as part of the family. This is an affectionate breed, one that will have a great need for human companionship. The dog loves children and makes wonderful playmates especially if the dog is well socialized or have been raised in the company of the children while still a puppy. This breed has the tendency to be dominant. A German Broken Coated Pointer needs to be well socialized so that it will tolerate other dogs and animals.

Because the dog is high spirited and filled with boundless energy and enthusiasm, it would not do to keep the dog in an apartment or in the city. This dog would need lots of physical activity and the setting should accommodate the needs of the dog. For sure, an owner would not rob the dog the chance to cover the ground in big leaps and bounds. A gracefully running German Broken Coated Pointer is truly a wonderful sight to behold!

The Deutsch Stichelhaar is a very easy dog to care for. The weather resistant coat can also be considered as dirt resistant too. Dirt would fall off the coat just like water does. However, brushing the coat once or twice a week will promote its good condition. This breed loves the water. The dogs are more prone to ear infections. Therefore ears must be regularly checked and cleaned.

The German Broken-coated Pointer is believed to have originated in the region of Frankfurt-on-Maine in the 20th century. This breed is considered to be the oldest of the German rough coated pointing dogs as it has existed even during the 18th century. The Deutsch Stichelhaar was proven by Hans von Kadisch, a cynologist, to be a distinct and separate breed and not just a variety of the German short haired pointing dogs. The existing breed was actually revived from the remaining specimens and not created.

After the decline and fall of the Roman Empire feudalism became the system of land ownership in Western Europe. Europe was separated into kingdoms where the kings divided the lands into fiefs. These large tracts of lands were given to noblemen thereby classifying the citizens onto landlords and subjects. Naturally the lords would have many rights and privileges that the underclass would not have. One of these is the hunting privilege that is much treasured by the German nobles.

When feudalism was abandoned in the 1800s, much of the land became available to the public. Because of industrial revolution, the middle class became affluent and were able to participate in the hunting sport that was once reserved for the nobles. This gives rise to the need for an all purpose hunting dog. Middle class German hunters contrived to develop a hunting dog by breeding existing hunting breeds.

The old German Pointer, English Pointer and Setters, the Water Poodle as well as a number of mountain herding breeds were used to create an all purpose hunting dog that will be easily domesticated. After years of selective breeding, three categories of hunting dogs with distinct characteristics were created at the end of the 18th century. These are the long hair pointer, the short hair pointer and the rough haired which includes the Deutsch Stichelhaar.

The German Broken Coated Pointer resulted from crossing pointer and griffons thus creating a breed that looks like a smaller version of the wirehaired Pointing Griffon. The first Deutsch Stichelhair dates back to 1886. This breed is considered to be the oldest among all the other German Rough Haired Pointing Breeds. Like any other breeds of German Pointer, the Broken Coated Pointer is expected to hunt point and retrieve in the woods, on the field and in the water. This breed is exceptionally adept in retrieving feathered game like pheasants, ducks, snipe, woodcock as well as pointing and hunting furred game. A German Broken coated Pointer would not hesitate to take on much bigger game like wild boar.