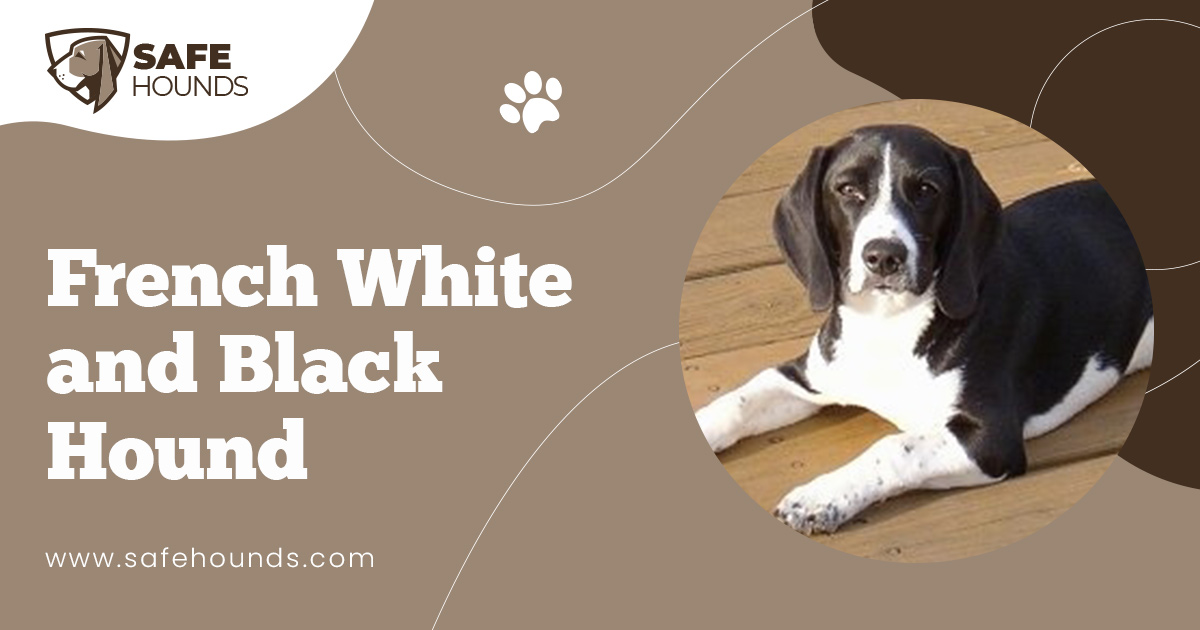 France is the home of several varieties of hunting dogs. One of these hunting dogs is the French White and Black Hound. Apart from the size this breed is distinguished from the other breeds by its coat colors. This breed, also known as the French White and Black Hound is a large pack hound with an elegant short, thick coat that is predominantly white with black saddle and black markings.

This breed has an excellent nose and known to hunt well in a pack. Originally developed to hunt small game, this breed has the resilience and the stamina needed to hunt deer and other big game. The French White and Black Hound has a strong melodious voice that would warn the hunter if the scent of a prey is found. This breed is extremely agile. A dog springing after a prey, easily covering the ground with big leaps, with all the energy and the rippling muscles is one breathtaking sight.

The French White and Black Hound is obedient, this breed was never known to be aggressive. However, this is breed is not suitable for first time dog owners as these dogs have the tendency to test the will of its owners. These are high spirited dogs and most noted for their enthusiasm and boundless energies. This breed strictly follows pack hierarchy and an owner that is not firm or one that is insecure will have a hard time controlling the dog as they can be very difficult to handle. Obedience training that must be started while the dog is still young is certainly necessary. A French White and Black Hound puppy like any other hunting breeds is expected to be highly energetic. Positive training methods should be started with a play session to make the puppy settle down and focus on the training at hand.

Due to selective and careful breeding practices, the French White and Black Hound is relatively free from any health concerns. With proper care this breed is expected to live from 10 to 12 years.

Strong bones and a well muscled body give the French White and Black Hound an impressive appearance. This breed may be unknown and seldom seen outside its country of origin but these dogs are highly prized in France because of its excellent prowess in hunting small game, deer and roe deer. This breed has a long firm back, a deep chest that reaches the point of the elbows, a well muscled loin and a flank that is slightly tucked up. In some individuals, the strong neck would have a dewlap. The whip like tail has an elegant appearance. Thick at the base, the long tail is carried upright when the dog is hunting.

A French White and Black Hound is a large breed of hunting dog. The massive well carried head as well as the muscled well boned body may give this breed an intimidating appearance. But once you look at the big dark brown eyes attractively encircled with black pigmented eyelids, you will see that this breed is not aggressive. The eyes show the intelligent, docile and trusting temperament of this breed. A French White and Black Hound has a slightly domed skull, a rather marked stop and a long straight arched muzzle. The nose has well opened nostrils. Ears that are set at eye level are slightly curled.

This breeds short dense hair should be black and white. Under the white hair the dogs skin is white. Black hair grows on black skin. A black mantle or saddle is common in most dogs. Some individuals have bluish speckling, others have tan markings on the cheeks. Pale tan hair may grow below the eyes, below the ears and at the base of the tail. The roebuck mark inherited from its Gascon Saintongeois ancestor is often seen on the thigh of this breed.

The French White and Black Hound is recommended for active people who love the outdoors. This dog will be a most suitable companion on hunting and trekking jaunts. These highly energetic dogs would require vigorous exercise. This is why the dog would not do well to live in an apartment. A French White and Black Hound is first and foremost a hunting breed. True, they do make excellent home companions because they have a well balanced temperament but these dogs would need to be given hunting and tracking opportunities. It would not be a good idea to keep this breed in confined quarters as the dog may be destructive and prove to be hard to handle. This dog will do well in a suburban dwelling with a yard where it can expend its excess energies.

Very energetic while hunting, this breed is known to be calm and docile inside the house. You can even say that these dogs are gentle couch potatoes. These dogs love children and will tolerate the rough handling of the kids. However, it would not be wise to leave very small kids alone with the dogs as it can not be totally avoided that the kid will be hurt while playing boisterously with the dog.

As mentioned these dogs are never aggressive. A French White and Black Hound will tolerate other dogs. These dogs would just walk and turn away from a situation that gets too hot. This breed is a fairly good watchdog as the throaty deep voice can be intimidating but do not expect this breed to accost intruders. This dog may even wag its tail to welcome strangers into the home.

The short coat of a French White and Black Hound needs very minimal grooming. The good condition of the coat can be enhanced with occasional brushing with a firm bristle brush or a rubdown with a chamois cloth. After a hunting trip the ears must be wiped clean to avoid infection.

The English Foxhound, an athletic clean cut hound with an elegant appearance is noted for being an active and passionate hunter. This breed is obedient and extremely devoted to its master. The Blue de Gascone, a scenthound that was developed in Gascony, a province in the southwestern coast of France is known for its extraordinary sense of smell that makes this breed an excellent hunter. The Saintongeois, a breed of scenthound that is almost as big as the Grand Blue de Gascone is noted for its power and for the magnificent gallop. This breed is valued by hunters for its very sensitive sense of smell. The English Foxhound, the Bleu de Gascogne and the Saintongeois are the progenitors of the French White and Black Hound.

The French White and Black Hound was created in France during the early 1900s by Henri de Falandre. He wanted to create a dog that a stamina and endurance that will surpass the capabilities of other hunting dogs. After careful crossbreeding and experimentation Henri de Falandre has attained his goal of creating the perfect breed of hunting dog when he mixed the Saintongeois with the Bleu de Gascogne. The English Foxhound was added to the gene pool to ensure that the breed that will be developed will have maximum power and endurance.

Henri de Falandre has really achieved his objective of creating a perfect hunting dog. The French White and Black Hound is a fantastic hunter. This breed is most valued by hunters because of its boundless energies that never seem to wane. These dogs would still manifest the eagerness to hunt even if the human hunter has called it a day. Aside form the impressive appearance, this breed has a breathtaking supple gallop. A French White and Black Hound galloping after a prey is a magnificent sight to behold. This breed is considered to be one of Frances most prized hunting dogs. Unfortunately, this is an extremely rare breed and some dog experts believe that the French White and Black Hound is already extinct. The breed is not recognized by major kennel clubs though the breed has gained official FCI recognition in 1957.