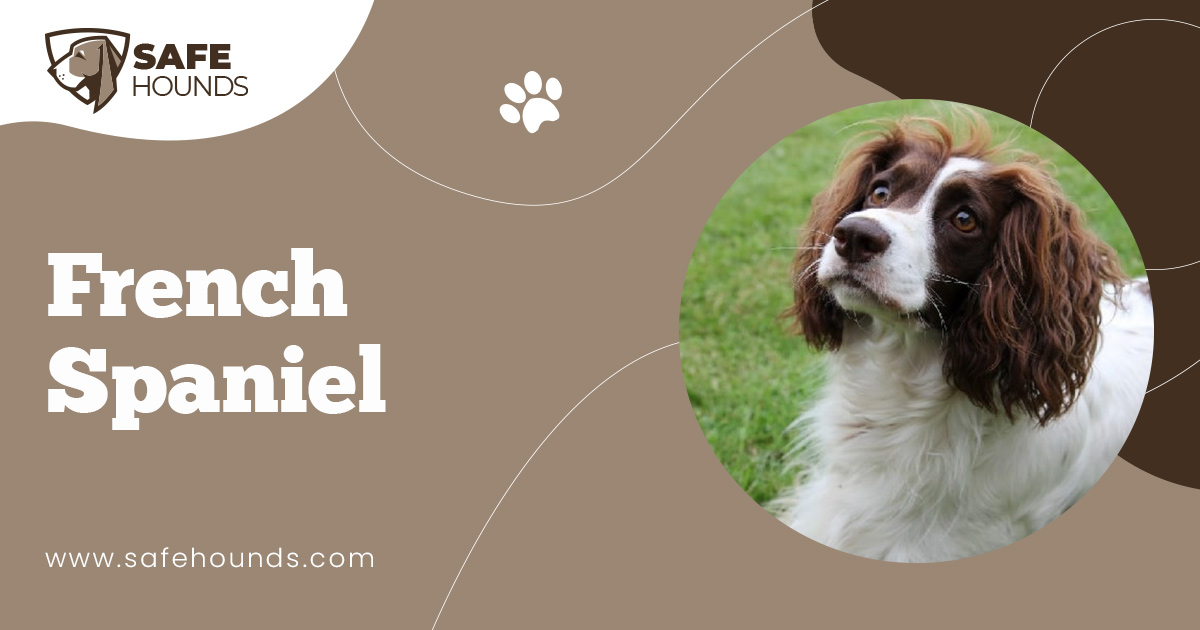 A French Spaniel is an ancient breed believed to have existed during the 14th century. This breed was favored by the French nobility and was primarily used for falconry and net hunting. This breed may be prized in its country of origin but it is relatively unknown outside France. The French Spaniel is described by dog experts as a breed with spaniel features but with a body that resembles that of a setter. This breed has an elegant medium length wavy hair that protects the dog from icy water and extremely cold weather.

A French Spaniel is known for its calm, loving and intelligent nature that makes it a wonderful family dog. This breed though is basically a hunter, one that manifests versatility in tracking, pointing and retrieving game on land or in water. This is a multi-purpose hunting dog but its expertise is hunting in fields as well as in the forest. A French Spaniel hunting woodcock, grouse or snipe in any type of terrain is a joy to see. This breed is a methodical and tenacious hunter. Frigid water or bull briars will not dampen the enthusiasm of this breed to go after a game. This dog has varied hunting methods. It can run after a prey in an all out gallop or stealthily creep and freeze once a feather prey is scented.

A French Spaniel apart from being an exceptionally versatile hunting dog has a classical beauty. This is an even tempered breed that is easy to care for. Does an owner need to ask for more?

A French Spaniel is an athletic dog with an elegant appearance. Standing at approximately 24 inches from the shoulders, this breed is considered to be one of the two largest breeds of spaniels. This bred has an athletic well developed physique. But even though the dog is well boned it can not be denied that a French Spaniel has an elegant appearance. The dog has a well muscled neck, a high and broad withers and a straight firm back. The loin is broad and the chest is deep. Forelegs and hind legs are well muscled and strong. This well developed physique gives the dog toughness and endurance. With the strong frame, the dog may look intimidating. However, the dogs rather big oval shaped eyes of a dark amber color give the dog a soft and gentle appearance. Once seen this breed will often generate compliments because of the attractive white coat that is marked with variedly shaped and sized spots that comes in different shades of brown-from warm cinnamon to distinctive dark liver. Long wavy hair falls beyond the rounded tips of the ears. The back of the legs as well as the tail is furnished with long wavy hair. Hair is short and fine on the head, flat and silky on the dogs body. Undocked tail reaches the point of the hock and curves saber fashion. The tail has a thick base and tapers towards the tip. Undoubtedly, owning this breed is a pleasure not only because of its excellent working abilities but also because of its admirable appearance.

A French Spaniel is a fantastic pointing dog. This dog has a great stamina, extremely intelligent and very active. This is a great dog to have in the house, a dog that will be a joy to live with. This dog has a well balanced personality, one that is gentle, patient and loving with the family especially with the children. This breed is a people dog. A French Spaniel will expect attention but is intelligent enough to understand and accommodate the busy schedules of the human family. The French Spaniel is a sociable dog. This breed is an ideal companion in all situations and settings. Owners will never have to deal with an aggressive pet that will accost people and other animals. This is a friendly breed. A French Spaniel will instantly welcome friends of the family. This outgoing nature extends to dogs and other animals.

A French Spaniel forms a strong bond with the master. This breed is known for its eagerness to please the master. As such the breed can be trained easily. However, this dog will not take to heavy handed and harsh treatment. A French Spaniel is easily intimidated. Owners must ensure that consistent training is done in a firm but positive and gentle manner.

Being a working dog, a French Spaniel has a great stamina and is accustomed to vigorous exercise. This breed is not suitable for apartment living as they are very inactive indoors. A French Spaniel that is unable to expend its excess energies will be a destructive one. This breed will do well in the rural areas or in an urban home with acreage where the dog will have the opportunity to run off leash. The weather resistant coat enables to dog to stay outdoors even in cold weather condition. Suitable owner will be active outdoor type of person who will take the dog on hunting and hiking trips.

A French Spaniel is a low maintenance dog. Owner only needs to brush the coat twice a week to maintain its good condition. However, if the dog had gone hunting it would be necessary to thoroughly brush the coat to remove burrs. Likewise, ears must be checked carefully. Bathing and dry shampooing must be done only when necessary.

The French Spaniel is considered to be one of the oldest if not the oldest breed of pointing dog. This handsome breed that was developed in France is speculated to have directly descended from the Chien dOysel. Chien dOysel, a 14th century pointing dog in the Mediterranean region is believed to be the ancestor of majority of the pointing breeds today. The French Spaniel is speculated to be related to the Drentsche Patrijshund and the Small Munsterlander. The French Spaniel and the English Setter is believed to be the progenitors of the Brittany Spaniel.

This handsome breed has gained enormous popularity during the Middle Ages. The French Spaniel was utilized for falconry and as a setting dog for net hunting. Hunting was a favorite sport of the royalty and the upper class. This breed became the favorite of royalty during the 17th century. The French Spaniels have found a place on the royal courts of Versailles as kings and princes favored them over other breeds of hunting dogs. These dogs were widely used in hunting partridge and pheasants. Because of the popularity, a French Spaniel hunting partridges was depicted in 17th century paintings done by Desportes and Oudry. The breed was also portrayed in several artworks and engravings of the era.

It took 250 years before the first standard for the breed was written. The 1st breed standard that was written by James de Connick in 1891 was amended several times to fit the natural development of the breed. It is really quite perplexing as in spite of the popularity of the French Spaniel, the breed almost became extinct in the early 19th century. The decline of the breed population was attributed to the competition of this breed with foreign sporting dogs. The French hunters have shifted their preferences to other breeds particularly to the English hunting dogs.

Father Fournier, a French priest, recognized the outstanding attributes of the French Spaniel and undertook the saving of the breed. He gathered the remaining dogs and selected the finest specimens. The selected French Spaniels were taken to the priests Saint Hillaire kennels where the priest had tirelessly worked to rebuild the breed. Present day French Spaniel lovers owe Father Fournier a debt of gratitude. Because of the priests meticulous selective breeding an athletic and elegant French Spaniel was created, a dog that is agile and known for its outstanding hunting abilities. The dog that was created not only has admirable physical features but one that makes a wonderful home companion due to its intelligent, loyal and obedient nature. To recognize the accomplishments of Father Fournier, he was made the first president of the French Spaniel Club that was formed in 1921.

For years, the breed has stayed in its country of origin and remained unknown to the rest of the world until the French Spaniel was introduced to Quebec, a province of Canada in 1974. Shortly thereafter the Club de lEpagneul Francais du Canada was formed. Through the efforts of a group of French Spaniel lovers, the breed was officially recognized by the Canadian Kennel Club in May 1985. Because of the breed excellent hunting abilities as well as its loyalty and well balanced temperament, the breed has gained recognition not only in Canada but also in United States.