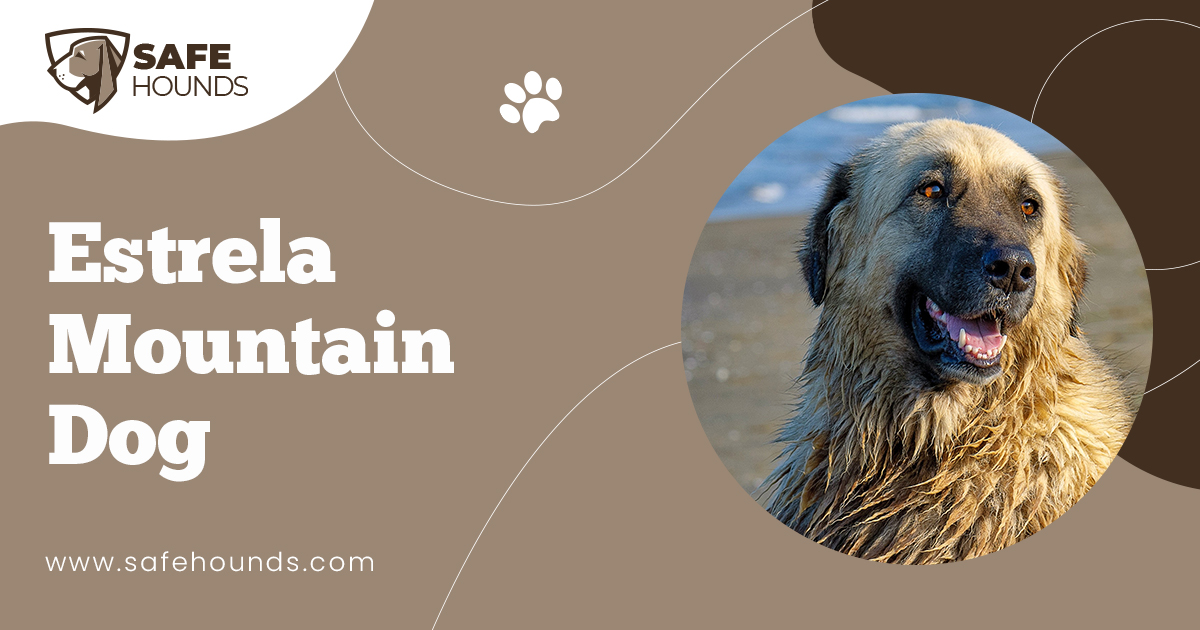 The precise origin of the Estrela Mountain Dog is unknown. This breed that was speculated to have developed from the molosser dogs brought by the Visigoths during the Iberian Peninsula invasion was utilized by the nomadic shepherds to protect the sheep. For centuries the breed has existed in relative isolation. The breed development that spanned hundreds of years has created a dog highly valued for being an excellent flock guard. Dog castration has become the practice of shepherds to prevent the dogs from wandering to mate. The dogs were selectively bred thus the purity of the breed was maintained. The Cao da Serra da Estrella are very strong and powerful dogs that have the adapted well to the harsh mountain environment. These dogs that survive on very little nourishment are very protective not only of the flock but also of the human family. The Serra da Estrela Mountain Dog is considered to be one of the best guard dogs in the world. This vigilant and protective dog is also noted to have an affectionate and loyal temperament. Today the Estrela Mountain Dog is still performing the task it was specifically developed for. These dogs are still guarding the flocks in its country of origin but a lot of dogs have found other jobs. Because of its guardian ancestry, these dogs were trained and used by the Portuguese Marines as patrol dogs. This affectionate, devoted and obedient breed also makes a wonderful addition to the family.

The Estrela Mountain Dog is a well proportioned compact mastiff type dog. The dog has a long powerful head with a slightly rounded broad skull. Both the skull and the cheeks are covered with smooth skin. The long slightly convex muzzle tapers to the slightly aquiline large black nose with well opened nostrils. Large clean cut lips have black pigmentation. This breed has very strong jaws and well inserted strong white teeth. Medium sized oval shaped eyes are well opened. Preferably amber or darker colored eyes with black tight eyelids have a calm and intelligent expression. Thin triangular ears that have rounded tips are moderately high set. Edges of the rose ears are carried close to the skull. The short thick neck that is well set onto the shoulders has a short tuft of thick hair under the throat. The Estrela Mountain Dog is a hard working breed with a strong and compact well proportioned body. The dog has short though wide and well muscled loins, a rounded and well let down chest and a gently rising underline. Long tail reaches the hock. Scimitar shaped tail is thick and well furnished with hair in the long coated variety. The tail hangs down between the thighs when the dog is at rest and raised above the back with a curve when the dog is on the move.

A Estrela Mountain Dog has two types of coat that both resemble a goat hair in texture. The short coated variety has a thick slightly coarse outer coat and a shorter dense undercoat. The long coated variety has a thick, coarse flat or slightly wavy hair that lies close to the body. Very dense undercoat is lighter in color than the outer coat. Long coated dogs have a ruff on the neck, breeches on the rear side of the legs and on the buttocks as well as feathering on the tail. Coat colors can be wolf grey, fawn and yellow.

The Estrela Mountain Dog is an independent breed. The dog never needed the commands of the shepherd as it would act on its own to protect the animals under its care. Its distrustful and watchful temperament is what makes this breed an excellent guard dog. However, the dog forms a strong attachment with its family. This is one of the breeds that would not easily adapt to a new home. This dog is friendly with the children especially if raised with them from puppyhood. Because of its protective instinct the dog would need to be socialized so that it would tolerate other dogs and smaller pets. These dogs are accustomed to running in open areas. It would never do to coop the dog within the confines of four walls. The high exercise requirement that is not met will turn the dog into a destructive on. The dog would be happy to live outdoors as they are well protected by their weatherproof coats.

The Estrela Mountain Dog has two coat varieties. There are short coated and long coated Estrela Mountain Dogs. The short coated dogs would naturally be easy to care for. Owners of short coated dogs can get away with weekly brushing to maintain the good condition of the coat. A long coated dog however, would need a more extensive grooming routine. More frequent brushing would be needed to prevent the formation of tangles. Both varieties have weatherproof coats that allow the dog to endure wet and extremely cold temperatures. Frequent bathing must be avoided for this breed so as not to remove the natural protective oils that weatherproofs the coat.

The Estrela Mountain Dog is a rustic powerful dog found in the Estrela Mountain regions of Portugal. Like any other ancient breeds, the exact history of these powerful dogs is as well lost in the mist of time. It was speculated that this breed was developed from the mastiffs that were brought by the Romans when the Iberian Peninsula was colonized. Some historians believe that ancestors of this breed were the molosser breeds brought to the Iberian Peninsula by the invading Visigoths. As there were no records about the early existence of this breed the origin of the Estrela Mountain Dog is still unknown up to this time. What was ascertained is the fact that this breed has descended from mastiffs and that this is one of the oldest breeds of dogs in Portugal. How the dogs evolved is also unknown but it was speculated that the sheep owners in the Estrela Mountains made use of the massive dogs to protect the sheep from wolves and other predators and also from thieves.

The early guardian dogs though are different from the Estrela Mountain Dog that we know today. Present day guardian dogs are the result of the development that spanned hundreds of years. The sheep farmers in the mountain regions have developed a breed of dog that is noted for extraordinary strength, agility and immense endurance. The dog has managed to survive in the harsh mountain environment even with very little sustenance. The dog breed that was developed is the Estrela Mountain Dog, a deep chested and strong legged dog with a jog-like gait. For hundreds of years the bred has remained pure mainly because of the isolation of the region. However, because of the isolation the breed has remained unknown outside its place of origin until the early part of the 20th century when aristocrats noticed and were impressed by the breed. Some specimens were taken home and utilized as guard dogs for their estates. A Estrela Mountain Dog has elegant impressive looks thus the dogs became attractive additions to the family. More and more dogs became home companions especially when the flocks in the mountain region started to decrease. Because these dogs were favored by the aristocracy, the Portuguese people that admired foreign breeds have started to notice the guarding dogs from the Estrela Mountains. The dogs that were once ignored in dog shows started to be recognized as royal dogs. From 1908 to 1919, special dog shows known as concursos were held to promote the breed. By 1930s, the Estrela Mountain Dogs status in the dog world was established. In 1933, the first standard that established the Estrela Mountain Dog was established.