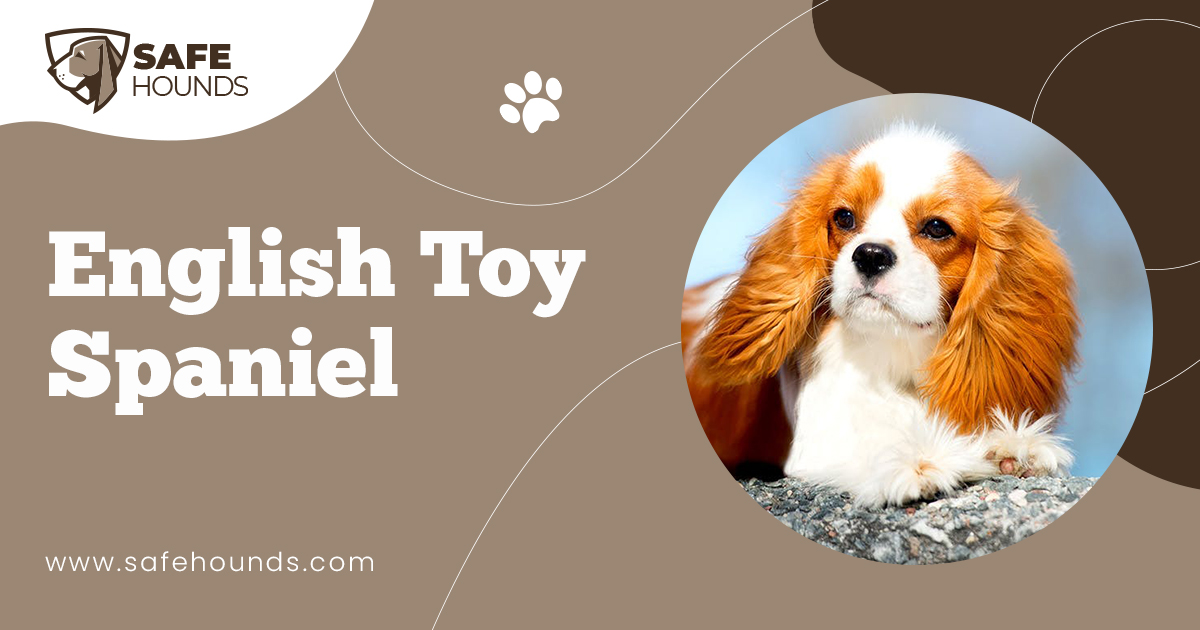 The English Toy Spaniel is a small sturdy spaniel with a pug like nose with wide open nostrils. They look so cute with their under bite. They have round dark eyes and a very sweet expression to their face. Their ears hang down and next to their cheeks and their ears are feathered looking.

The Spaniel comes in four distinct colors, which include the King Charles, which are black and tan, the Ruby, which is solid red, and sometimes a few white hairs on chest, and then there is the Blenheim that is white with a bit of red markings and usually has a red thumbprint like marking on the top of their head. Then the last one is the prince Charles that is the tri-colored white with black and tan markings. In addition, the tailed is usually docked.

They usually weigh in at 8-14 pounds so they would make a great house dog. They make a great lap dog for the elderly. They are a very loving and docile dog. They do like to have one owner and love them instead of the whole family.

They love to entertain you in their own clownish ways. They are very amusing when they are loved by you. They want to please you so they do what they can to show off at times. They have their times when they are shy around strangers, however, when they get to know you they will be your friend but still leery of you if you are not family.

When looking at the English Toy Spaniel you may see a pug like face. This is because they are somewhat related to the pug line breed which gives them that pug like face that is so adorable anyone falls in love with them. Their face has a black nose with exceptionally open nostrils. The teeth on this little spaniel breed should be a little undershot. Their eyes are large and round that are dark in color with a sweet expression in them. Their ears are feathered with fur and long. They hang down the cheeks of the dogs face. The tail on this breed is docked.

The English Toy Spaniel has a feathered coat that is soft and silky to the touch. Their fur coat has a wavy look to it. Their coats can come in four different varieties called King Charles (black and tan), Ruby (solid red which also may have some white hairs in the coat or a patch of white on its chest), Blenheim (white with red markings) and then there is the Prince Charles (tri-color: White with black and tan markings on them).

This breeds small body makes this dog so loveable. Their head is larger than their body, which makes this dog so adorable. This breed might be small but it is compact and also very sturdy for its size. This breed is adorable in everyway with its size and wonderful features it shows. With their sweet look and adorable features, this dog is a popular breed in dog shows around the world.

The personality of this breed is one everyone can love. This breed of dog was mainly bred to be a loving companion for one person or a whole family. They love being a family dog. This breed loves to fulfill their owners needs and being there for everything. This is a dog you can get close to and know they will not leave. They can be edgy around strangers, but if it is someone they have been around before, they will be your best friend. His or her charm is something that anyone will fall in love with.

When training this breed you must be patient because they can be a bit stubborn. You must keep in mind with this breed of dog does not take harsh actions. So make sure to use positive training methods. This breed can be a barker at times and can make a good watchdog. The English Toy Spaniel will be the first in the house to let everyone know that someone is there.

The English Toy Spaniel has a few things you need to know about caring for them. The first thing you need to know is to brush the dog regularly to keep mats out of their coats. Another thing is to keep their ears clean on a regular schedule. Exercise for this breed is nothing but a short walk every few days or letting them run around in a fenced in area in your yard. With having the pug like face, you might hear snorting or snoring coming from your dog. This can be very cute to hear from your dog. Another thing with this breed is to be careful on how long they are outside on hot and humid days. They do not do all that well out in this kind of weather.

The English Toy Spaniel is a meticulous eater such as you might expect from royalty. These are the best dogs for people who want a quiet dog and needs very little exercise. They are very good with other animals. These dogs also need to be treated gently, no rough housing. So watch them around children, even though they get along with kids, the kids may not get along with them. Great for apartment dogs as long as you do not live on the 90th floor. Taking them out to do there duty can be a headache then. They do have little potty things that are like a little area of grass for the patio if you do live way up there. Just set it on your patio and train your dog to use that and it just washes up. Clever idea.

1570 was the first reference to the English Toy Spaniel and at that time, they had a pointed muzzle. King James II Charles brother was shipwrecked and the first thing he said was Save the dogs then almost as an after thought he said to save Colonel Churchill. Then after that King Charles issued a Royal proclamation that all Toy Spaniels have entrance to anywhere in the British Empire which still holds true to this day.

Then when they developed the round head and the flat face it was because of the cross breeding with the pug, Japanese Chin and the bull dog. During the Second World War, they were almost lost except for two breeders who kept them alive. Now, the little darlings have charmed their way through history.