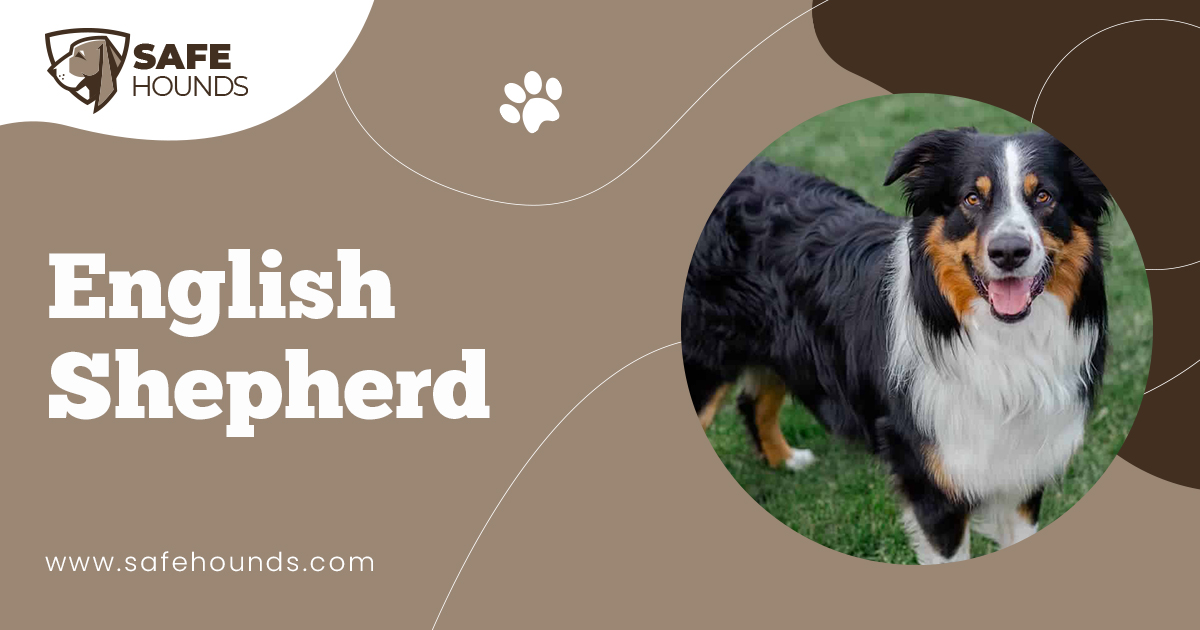 The English Shepherd is a versatile working dog that was developed in the United States. The breeds rather misleading name is due to the fact that this breed has developed from the farm dogs that were brought from Scotland and New England by early settlers of the American colonies. The history of this breed can be traced as far back as 55 BC. Having descended from the Roman Cattle Dogs that were used to herd the livestock brought by the Roman invaders to feed Caesars troops, the English Shepherd is considered to be one of the most capable herding breeds. This working dog is highly valued for its versatility. This dog is not only a tireless and dependable herder of cattle and sheep but also of pigs, goats and even fowls. This practical all around farm dog hunts, eradicates vermin and noted to be an alert and dependable guard dog. Popularity of the breed soared. The English Shepherd is the most prevalent dog in United States in the 1800s. The dog works independently. This breed will not wait for the commands of the master as it will act on its own if it sees something must be done. This breed was originally developed to be a herding dog but the English Shepherd unlike other herding dog is not an obsessive herder. After the herding is done, the dog would not need kenneling as it will not bother the livestock. The dog would be contented to rest quietly at its masters feet. The empathy the dog has for the animals under its care makes this breed a wonderful family companion.

The English Shepherd is a medium sized dog that has a striking resemblance to the Border Collie and to the Australian Shepherd. Males are generally larger than females. These dogs are valued for their working abilities but an English Shepherd is an elegant and impressive looking breed. The coat that can be straight, wavy or curly can have a black and white or black and tan color. Some specimens sport a beautiful tri-colored coat. The English Shepherd is a fairly healthy breed. It is expected to live for about 12 to 16 years.

An English Shepherd is a moderately sized breed that measures between 18 to 24 inches at the withers and weighs from 40 to 60 pounds. This breed has a sturdy well proportioned build that exudes strength and stamina. An English Shepherd has a wide skull, a broad medium length and slightly rounded head with a moderately defined stop. The moderately broad muzzle is neither pointy nor pegged. The nose is generally black though sable dogs can have brown pigmented noses. Moderately round brown eyes are slightly oblique Eyes have a strong and intelligent expression. Ears that stand slightly outward are set wide apart. Ears are raised slightly when the dog is alert otherwise the ears lie close to the head. An English Shepherd has a strong arched neck. The slightly longer than tall body has a strong level back, well laid back shoulders, well sprung ribs and deep chest that extends to the level of the elbows. The moderately long tail with a sweep towards the end is usually held low.

This working breed has a straight, wavy or curly medium length coat that is dirt resistant and weatherproof. The undercoat is shed seasonally. The head, the outer side of the ears and the front of forelegs are covered with smooth short hair. Longer hair at the back of thighs forms moderate breeches. English Shepherds have four dominant coat colors – sable and white, black and white, black and tan and the tri-colored coat which is composed of black tan and white. Dogs may have white markings and black mask.

The English Shepherd is a tireless working breed but it is noted to have a calm temperament. This breed is more of a one-master dog. This intelligent and sensitive breed would choose one person it would bond strongly with but its friendly nature extends to the rest of the family. This friendly behavior though is not extended to strangers. This breed makes an excellent watchdog because is it leery of strangers. The dogs energetic and playful temperament makes is a wonderful companion of children. This breed is good with dogs and other animals too. Intelligent, an English Shepherd is highly trainable. However, the dog has the typical stubbornness of shepherds. This is a not a push button dog. The owner of this breed must be able to gain the trust and respect of the dog. The owner must be the alpha male that will enforce the rules otherwise the dog will take on the role of the pack leader and make its own rules. An English Shepherd is a working dog with high energy levels. The dog would require a good amount of mental and physical exercise. This breed would be a good choice for an active owner living in the rural area.

An English Shepherd has a double coat that is fairly easy to maintain. The straight, wavy or curly coat practically sheds off dirt. Frequent bathing would not be necessary for this breed. Bathing and shampooing should only be done when the dog gets extremely dirty. Regular coat brushing would be necessary for this breed to remove dead hair and to distribute the natural oils that moisturize the skin and the hair.

Despite the name, the English Shepherd is an American breed. These are the typical medium sized dogs with straight, wavy or curly black and white or tricolored coats that are often seen in the movies. The dogs will be seen helping around the farm, herding livestock, on the heels of the master or placidly lounging on the porch steps. These dogs have been the companions and all around farm dogs of the early settlers in American colonies. One sees these working dogs in farms all over the country. From the good ol farm collie, the breeds name has progressed to Old Farm Collie. The name was changed to Farm Collie, to Farm Shepherd and finally to English Shepherd. The breed is said to have originated from England but the English in the name does not refer to the country. The name was probably given by the Amish people that refer to anything that are not Amish as English.

The English Shepherd is the epitome of an all American farm working dog. In recent years, these dogs are being utilized as search and rescue dogs and as therapy dogs. This working breed has also excelled in agility and obedience competitions. The breed has gained recognition in fly ball and Frisbee competitions. The English Shepherd was recognized by the United Kennel Club since 1934.