The English cocker spaniels physical features are that of a hunting dog with a compact body, deep chest, and short back. They have long ears, flattened skull, wide jaws, and strong teeth, just the right size for hunting game and fowl. It originated as a companion on hunting sprees in England. Spaniel breed of dogs have been found in literature for the past 500 years in England. The American Cocker Spaniel is an offshoot of the English cocker spaniel, which was later bred in USA after being imported from England in the 1890s.

They have been known for their good hunting capability while remaining jovial and loving with all age groups. They have a medium coat with long hair on the body and short, silky hair on the head. Tails are docked early and are carried horizontally. They come in different colors including solids, partly colored roans in black, brown, golden, red, liver with tan on the eyebrows, muzzle, throat, chest, paws. Blue roan is the most popular color. These are beautiful dogs with a good temperament and need low maintenance to look good. 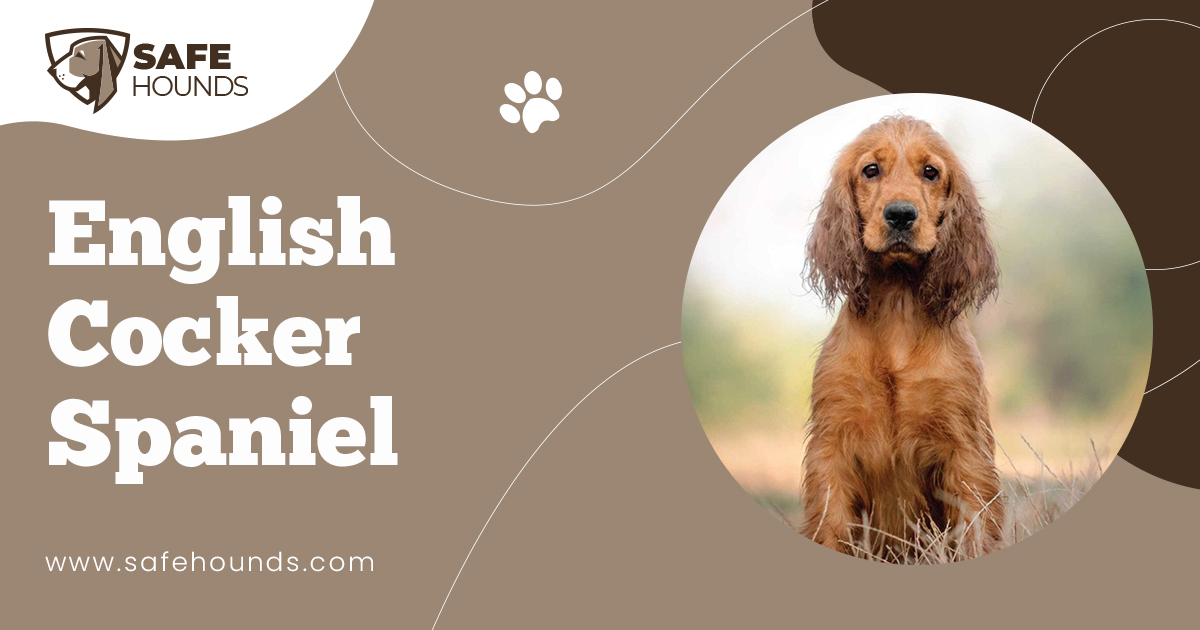 English cocker spaniels have been known to be merry, fun loving dogs with a powerful gait that can cover distances fast and a build to get in dense foliage to retrieve game. They have an easy disposition with a genial nature that makes them a perfect pet at home. They are neither lazy nor hyperactive, so with little exercise each day, they remain happy.

Though they have a long coat, maintenance is still easy with little trimming when needed. English Cocker Spaniels have beautiful eyes that seem to understand you and have a very intelligent look. They are generally compatible with other breeds of dogs and get along well with cats. Other non-canine pets need to be looked after if they play together as the instinctive hunting gene is still dominant.

The English cocker spaniel stands between 16 to 17 inches, weighting 28 to 34 pounds, in males. The females stand at 15 to 16 inches and weight about 26 to 32 pounds. It has all the characteristic of a superb hunting dog with flattened head, oval eyes with tight lids, low set long ears, which extend to the nose and are covered with very silky hair. It has wide jaws with strong teeth that close in a scissor grip. It has a compact, muscular body with a medium coat of soft hair. The tail is docked and usually carried horizontal, which they really love to wag. It has well angulated legs and their paws are cat like and round in shape.

The color of their coat is varied. They come in different hues of roan as black, red, liver, golden, and can have tan points on the eyebrows, feet, muzzle, chest, and throat. The most sought after color is Blue roan. The hair is very soft on the head and ears while it is slightly mixed with hard hair on the body.

English Cocker Spaniels are merry, active, strong, and very affectionate dogs. They are very good with children and are gentle while playing. Generally, an outgoing, social breed of dogs, but some may be reserved. As they are hunting dogs, the field variety does not make them good pets. If you want to welcome one into your home, the line of show dogs should be considered.

They are neither lazy nor hyperactive dogs and make excellent companions as house pets. They need careful gentle handling for training, as they are sensitive dogs. They get along very amicably with cats and are intelligent and independent.

As they have luxurious coats in varied hues, regular combing and grooming is important. Some coat textures are thick and become matted fast, while other breeds have flat silky hair. All of them need proper shampooing and bathing.

Trimming of hair is needed especially around the ears and paws. Checking for ear infections and grass seeds are necessary. Good grooming requires cleaning the ears regularly, brushing out burrs from the long haired coats after romping in the grass. It is also necessary to cut hair from around the pads and toes. English Cocker spaniels are average shedders and sometimes require professional grooming.

English Cocker Spaniels do have dry skin, so when bathing you should use gentle shampoo and use dry shampoo until they really need a good cleaning. Since, their skin is prone to be dry, they do scratch quite a bit.

English Cocker spaniel is the oldest type of land spaniel known which descended from the original spaniels that belonged to Spain. The first mention of Spaniel was made by Gaston Phebus in 1300.

Before the 17th century, all spaniels were considered as one breed. Later they were divided into groups based on their hunting ability and size.

It was in 1800s that the bred came to be divided into seven localized spaniel breeds: Clumber, Sussex, the Welsh Springer, the English Springer, the Field and the Irish Water spaniel, and the Cocker. All of them had the origin from the spaniel type dog that was imported into Great Britain many centuries ago. The original English Cocker spaniel underwent a number of changes during the 1920s and 1930s to achieve the right type of dog – for field work and as show dogs.

The name Cocker comes from Woodcock, the bird that this dog was originally bred to hunt. It was also used to hunt other birds and game. They can hunt very well in diverse terrains and the talents of this breed lies in hunting, retrieving, tracking, and being a watchdog and are very obedient. English Cocker spaniels were used as gun dogs on hunting expeditions in Great Britain during the 1800s. After selective breeding, English cocker spaniels have become good house pets. Their easy disposition has already made them a favorite breed of dog that is kept as pets.