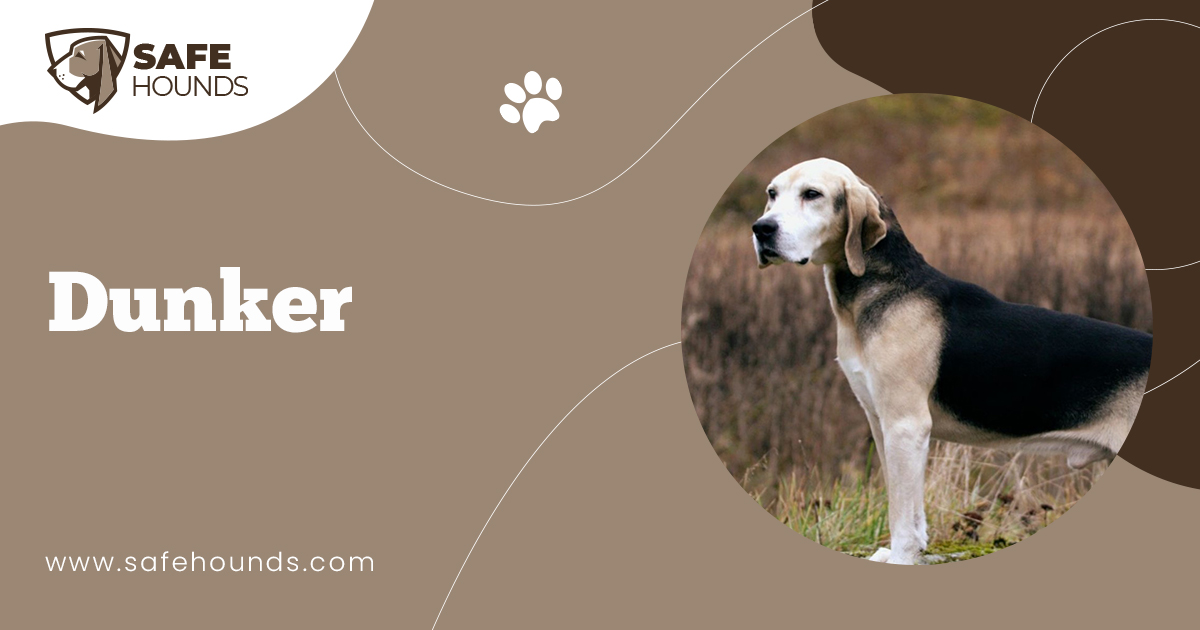 The Dunker also known as the Norwegian Hound is a breed of dog that originated in Norway. The name of the breed was taken from Herr Wilhelm Dunker, a Norwegian breeder who created this breed during the 19th century. Herr Dunker was able to realize his objective of creating a scent hound that will have the staying power and the speed of a sight hound with the Dunker.

The Dunker is an elegant breed not only because of the breeds unique coloring but also because of the admirable conformation that takes the sleekness of a sight hound and the rippling muscles of a scent hound. As mentioned, a Dunker has a coloring that is unique and distinctive to the breed. The coat comes in two varieties – one is the harlequin or merle which is a marbled blue color and the other is the basic tan coat that has a large saddle. The basically tan coat has a saddle that is dappled or mottled. A white blaze on the face, on the legs, tail and chest enhances the distinctive looks of this breed.

This breed that was created by crossbreeding a Harlequin Hound (Anglo-Russian Hound) with the indigenous dogs of Norway is one of the select breeds reputed to have been developed to hunt only one prey a hare. Although considered to be a specialized hunter, the Dunker is valued for its hunting reliability. A Dunker may be medium sized but this breed is powerfully built. The appearance exudes power and great endurance. The robust conformation enables this breed to adapt to various climatic conditions and the difficult harsh terrain of Norway. This breed is still unknown outside its country of origin, in fact it is still considered a rare breed in its native land. However, those people who have come to know this breed have come to realize that apart from being a tenacious and reliable hunter, a Dunker can be an all around farm dog. This good looking breed that is noted for its speed and endurance is affectionate and has a well balanced temperament and gentle manners qualities that makes the Dunker a most suitable home companion.

A Norwegian Hound is a medium sized dog whose powerful build give the impression of strength and endurance. The dog is robust but it does have an elegant appearance. A Dunkers noble head has no loose skin. The skull is slightly domed and the stop is well defined but not abrupt. A Dunker has a long square muzzle, a black nose with well opened nostrils and smooth, wide rounded tipped ears that hang close to the head. Expressive dark round eyes have a calm bright and serious expression. This breed has a complete dentition that meet in a scissor bite.

This dog has a level topline, a firm straight back and a broad chest with well sprung ribs. The tail that is set level with the topline is thick at the base and tapers to the end. The tail is usually carried straight with a slight upward curve.

The dogs coat is straight, dense, rough to the touch and not too short. This coat comes in two varieties. A Dunker can have a blue coat with a marbled pattern or it can have a tan or warm brown coat. Dogs with this kind of coat often have black saddles. The term for the blue marbled pattern is harlequin. This pattern is created by the merle gene. In the case of the Dunker this gene was handed down by its ancestor, the Anglo-Russian Hound that is also known as the Harlequin Hound. Very few hounds carry the harlequin color. This is because breeding two harlequins can produce deaf or blind puppies. Apart from the Dunker, Germanys Dachshund, the Irish Kerry Beagle and the Mountain Cur of America are blessed to have this eye-catching admirable coat.

The Dunker has existed for centuries. Although the Dunker is relatively unknown outside its country of origin, presently this breed of scenthound is known to be the most popular and the most used hound in Norway. Considering the fact that there are numerous breeds of hunting dogs in Norway, being voted to be the most popular must mean that this breed possess outstanding qualities that surpass what the other hunting breeds have.

As mentioned, the Dunker was primarily developed to hunt hare. This dog is most prized by hunters for its hunting reliability. This breed can adapt to harsh climate and difficult terrain. However, Norwegians have come to realize that apart from being an admirable hunters companion, the Dunker has the potential of being a wonderful family pet. This is a kind and friendly breed, one that is good and gentle with the children. This is not a dominant breed. A Dunker will tolerate other dogs but may have the tendency to chase smaller pets given that they have a strong prey drive for smaller prey. This unwanted trait can be curbed with socialization and obedience training that must be started while the Dunker is still a puppy. This is an independent breed and as such can be quite difficult to train.

A Dunker weighs about 35 to 49 pounds, a good size for apartment living. It is not in the nature of the dog to be noisy even if left for quite a while by the master. This means that the neighbors will not be irritated by the dogs barking. Truly, this is a versatile dog. A Dunker will do well in a kennel in the same manner that it will be happy to live in a farm where it will have the great outdoors for a playground.

A Dunker may have a short coat but this type of coat protects the dog from extremely cold northern winters. Just as with any other short coated dogs, a Dunker would not need extensive maintenance. Brushing the coat or wiping the coat with a cloth would be sufficient to remove dirt and to maintain its good condition.

The Dunker is an elegant hound that is believed to have existed for centuries. This breed however, is seldom seen outside Norway, its country of origin. The name of the breed was taken from the creator of the breed. Herr Wilhelm Dunker, a Norwegian breeder has envisaged a powerfully built dog that will have the speed and the stamina of a sight hound but one that will exclusively hunt hare by scent and not be sight. In 1820, Herr Dunker supposedly crossed the Anglo-Russian Hound (also known as the Harlequin Hound) with Alarm his favorite indigenous scent hound. Alarm is a dappled dog. The progeny of the planned breeding is the Dunker.