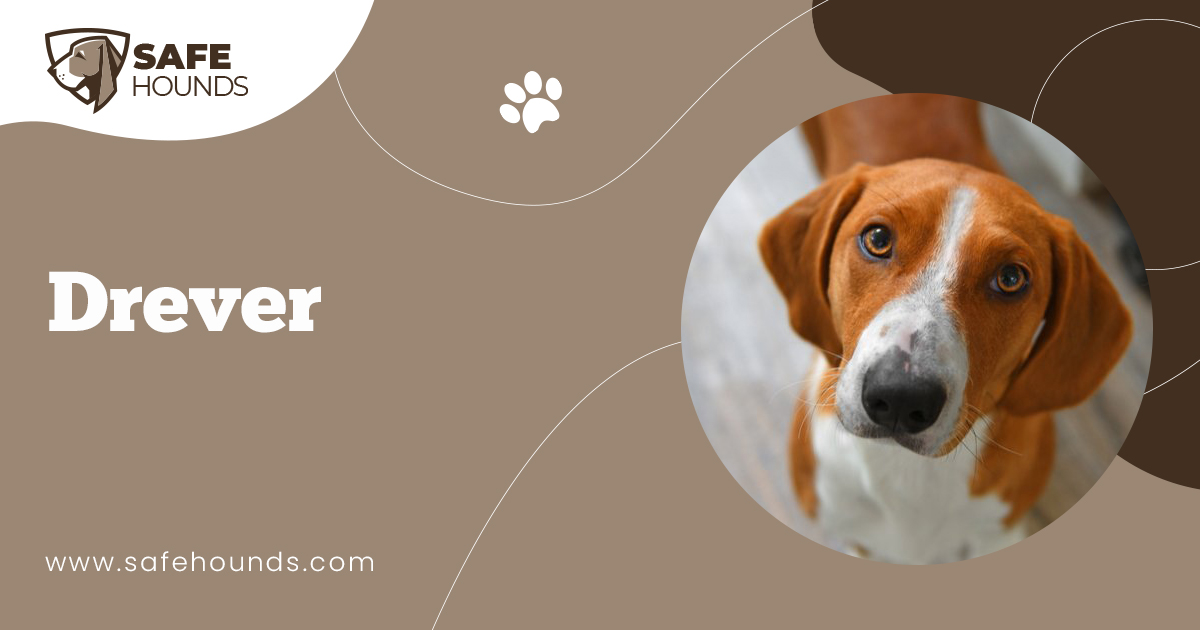 Drev, the Swedish word that means to hunt is an apt name for the breed that originated from Sweden in the early 1900s. This breed that was developed by crossing the now rare Westphalian Dachsbracke of Germany with Danish Dachsbracke is also known as the Swedish Dachsbracke. This breed was primarily developed to hunt hares, foxes and roe deer in the steep hills of Sweden. The hunting dog must have stamina as well as the capability to cope with the harsh climatic conditions. An ideal dog must be able to withstand snow and extremely cold weather and still have the competence to perform. A Drever is indifferent to bad weather, has a clear loud bark that enables the hunter to find the dog and the game even with the cover of thick underbrush. This distinctive bark will alert the hunter of the presence of game and most of all have the physical attributes needed to hunt the favorite game of Swedish hunters  the roe deer.

A Drever is a longer than tall breed of dog. The long body and the short legs give the Drever a rectangular appearance. The legs may be short but unlike a Dachshund, a Drevers legs are not bent. This breeds physical attributes has a practical purpose. As mentioned, roe deer are the most common quarries of Swedish hunters. Roe deer are skittish and nervous prey. The hunting hound would need to move slowly especially in areas with heavy snow. The hunter would either use a small dog or a normal sized dog but one with shorter legs. A Drever, apart from having shorter legs is a tenacious, courageous and methodical hunter. This dog has the courage to pit with a prey several times bigger than its size, has the craftiness to dodge and circle the prey while barking incessantly to warn the hunter and has the ability to hold on to the prey until the human hunter arrives within gun range.

A Drever is first and foremost a hunting dog. However, a Drever owner need not worry that the dog will be unemployed for the rest of the year when hunting season is over. A Drever may be an excellent hunter but it is an ideal home companion too. A Drever may not be the cuddly kind of dog but it is an affectionate pet, one that can be calm and quiet indoors but will turn on the active and lively switch in the company of children or when taken for long walks or given the chance to romp outdoors.

A Drever is a longer than tall breed. The head and the body of the dog are as large as the head and body of other hunting breeds. The only difference is that a Drever has shorter legs thus making this breed about 6 inches shorter than other normal sized hunting hounds. A Drevers legs are parallel and straight and not bent unlike a Dachshunds.

This breed has a robust well muscled body showing strength rather than elegance. In proportion to the body, the head can be considered rather large. The black nose is well developed with well opened nostrils. Tight fitting lips cover perfectly formed complete teeth that meet in a scissor bite. Low set ears are broad, medium in length and have rounded tips. Ears hang close to the cheeks. Dark brown eyes with close fitting eye rims have a bright expression. A Drevers tail is thick at the base and rather long. The tail usually hangs down but can be carried higher but never over the dogs back. This breeds hair is straight, rough to the touch and lies close to the body. Hair is shorter on the head, on the ears and on the lower part of the legs, longer on the neck, on the back and on the back of the thighs. Longer hair on the underside of the tail makes the tail bushy. Coat that can be of any color is generally marked with white.

The Drever is a courageous and tenacious hunter. This dog would want to continue working long after the human hunter has done hunting for the day. This dog has a heightened olfactory capability that makes it a powerful tracker. While hunting, this dog will show aggressiveness and would bark furiously while circling the prey. However, this breed will show a different personality while in the company of the human family. This dog would be alert but never aggressive even with strangers. A Drever is noted for its constantly wagging tail that shows its friendly temperament. These dogs would do well to live in homes with children. A Drever would enjoy playing with children and being made a part of the family. These dogs tolerate other dog and smaller pets too.

This breed is a most suitable choice for an owner who lives in the city and has a passion for hunting during the weekends. The dog will be an excellent hunting companion and at the same time would contentedly wait at home for the next hunting expedition. A Drever can be kept in an apartment provided they are taken on long daily walks. These dogs would be laid back inside the house but they love the outdoors and would enjoy running and romping around if given the chance.

A Drever is an easy breed to care for as it would not need extensive care and maintenance. Bathing the dog should only be done when necessary. Brushing the hair would distribute the natural oils of the coat. A rubdown using a damp chamois clothe will remove dirt and loose dead hair.

Around 1940s two distinctive types of brackes were created. The bigger one was officially given the name Drever in 1947. Drev is a Swedish word that means to hunt. This is an apt name for the breed as a Drever is renowned for its legendary hunting prowess. The Drever gained enormous popularity in its homeland and in 1949 the breed was recognized by the Swedish Kennel Club. Some Drever specimens were introduced to Canada. In 1956, the breed was recognized by the Canadian Kennel Club. This short legged dog that is primarily utilized to drive game towards the hunters gun is quite rare outside Sweden. However, the Drever is much valued and appreciated in its country of origin in the same manner that a Labrador retriever is placed in high esteem in its country of origin.

This breed that is known for its stamina in hunting has become the popular choice of deer hunters not only in Sweden but also in other countries where roe deer is hunted. Roe deer are known to be nervous quarries. The hunting dog must be able to move slowly especially in snow covered terrain. The Drever excellently fits this requirement.