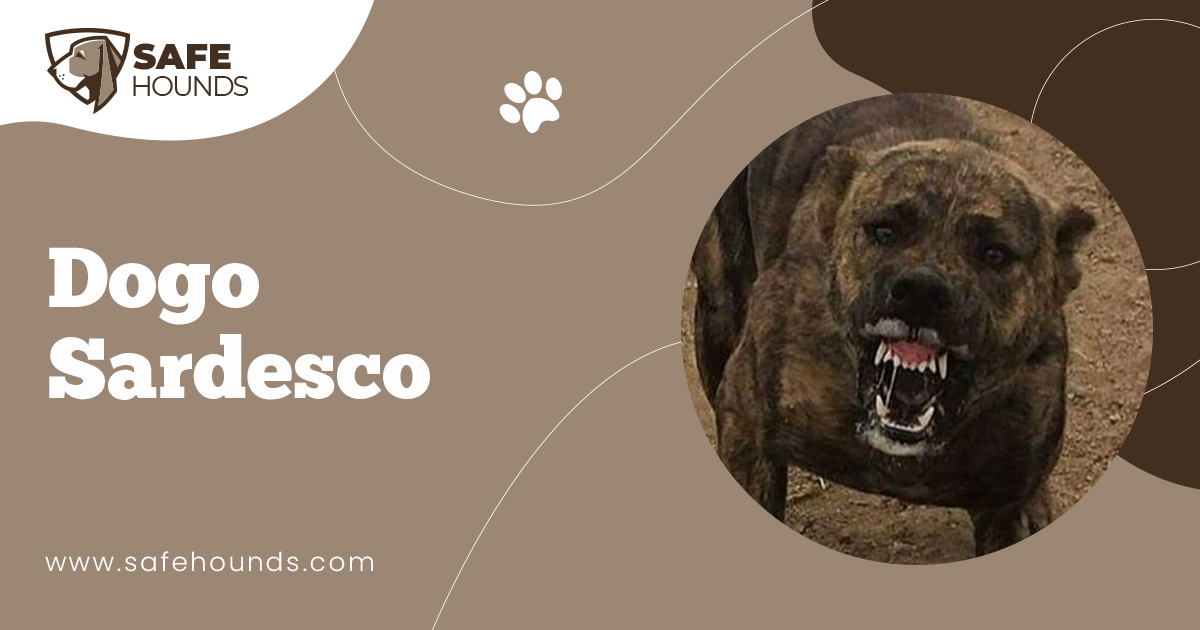 Dogo Sardenesco, Dogo Sardo, Cani Trinu, Beltigadu, Pertogatzu, Jagaru, Sorgolinu all these names refer to the very ancient breed of all around working dog that was developed in the villages of Sardinia, Italy. The origin of this breed is unknown. However, because of the archeological findings that perfectly portray the dogs, it was speculated that the Dogo Sardesco has lived with and have been utilized by the Sardinian people for over 3000 years, about 800 years before Sardinia was invaded by the Romans.

The Dogo Sardenesco is highly valued for its aggressive temperament. The dog was specifically developed to be a watchdog that will protect livestock and property. The breed is an excellent herder and a dependable and tireless all around working dog. The Dogo Sardesco is a fearless and tenacious hunter. This dog has hunted deer and wild boar. A Dogo Sardesco can easily take a wild boar by biting the neck. Ancient paintings have depicted this dog hunting deer and wild boars. However, hunting herding and guarding are not the only outstanding abilities of this breed. The dog was highly valued for the contribution it has rendered in shaping the history of Sardinia. These dogs were utilized as war dogs. Battles have been won because of the invaluable help of these dogs. These dogs were photographed with soldiers of the departing for the war in Libya.

The Dogo Sardesco is a rare breed relatively unknown outside Italy. The Sardinian people have kept these dogs pure. These dogs are rarely taken out of Sardinia as people refuse to sell the dogs to strangers.

The Dogo Sardesco is a brachycephalic molossoid. This rustic well boned breed has a muscular and athletic body. A Dogo Sardesco generally measures from 56 to 68 cm at the withers and weighs from 30 to 45 kg. However, there are no size limits for this breed so that dogs can be seen in a variety of sizes. This breed has a lean body but its conformation exudes immense strength. The dog has well developed chest, powerful neck and strong limbs. This breed has a massive square shaped head. The muzzle is long but it is slightly shorter than the skull. Complete set of dentition is strong and meet in a scissor or pincer bite. A Dogo Sardesco has prominent lips. The round eyes have a disturbing look. The irises come in varied shades of amber. Small ears are usually cropped or completely removed so that some specimens are seen with rose type ears. The long tail can either be docked or left in its natural state. A Dogo Sardesco is often confused with the Pastore Fonnese, another breed of dog native to Sardinia. However, apart from being a heavier breed the Dogo Sardesco does not have the monkey face and the ridge back typical to a Pastore Fonnese. A Dogo Sardescos tight skin is covered with a short, thick and smooth coat. Coat color ranges from red, gray, black or brindle.

The Dogo Sardesco has proven its abilities in herding and protecting cattle, in hunting large game and in being dependable watch dog. Noted for its ferociousness and highly aggressive temperament, this rugged strong dog has also excelled in dog fighting. Due to its aggressive nature, the Dogo Sardesco has landed on the list of banned breeds. However, this breed has also gained acceptance and popularity as a companion dog. The dog has an intimidating appearance and a vicious temperament but it is also highly valued for loyalty and protective nature. This loving and affectionate breed loves to receive attention from its people. Owners of Dogo Sardesco are assured that the property and more importantly the family will be kept safe. Dogo Sardesco however, is not recommended for families with children especially if the dog is not socialized and properly trained. Socialization is very necessary as this breed has the tendency to be aggressive with other dogs. This is an intelligent breed but it is also stubborn. Obedience training can be a challenge as the dog would grow bored with repetitive exercises. The owner or handler has to be patient and confident. It would also be necessary to gain the trust and the respect of the dog. A Dogo Sardesco is a working breed thus the dog is expected to have high exercise requirements. This breed is not recommended for apartment living as it would need adequate space to romp and run to satisfy its exercise requirements.

A Dogo Sardesco is a low maintenance breed. Being short coated, the dog would not need extensive coat maintenance. Brushing the coat occasionally would be enough to maintain its good condition. Frequent bathing will not be necessary for this breed but the dog would benefit from regular ear and teeth cleaning.

The Dogo Sardesco was developed in the villages of Sardinia. The breeds ancient existence was verified by small clay statues of the dog dating back 3000 years ago. There are two breeds of dogs indigenous to Sardinia – the Dogo Sardesco which is a molosser type of guarding dog and the Mastino Fonnese or Pastore Fonnese, a breed of herding dog. The Dogo Sardesco is highly valued by the Sardinian people. During the middle ages, the breed is popularly known as Jagaru. This breed was mentioned in Carta de Logu, the first European Code of Laws that was written in Sardinian language in the 14th century. This breed is highly valued not only for being an excellent herder and guard dog but also because the Dogo Sardesco has been instrumental for the Sardinians triumph during Napoleons invasion. Dogs that fight in battles were trained to work in twos – one would bite the neck and the other would bite the testicles. This fighting strategy has caused the French troops to panic and flee. In the middle part of the 1800s, Sardinia became a part of Italy. Again, the dogs were used in the Italian colonial wars with Libya. It was believed that German soldiers have taken home specimens of this breed after the Second World War and that the Dogo Sardesco has influenced some German breeds of dogs. The Dogo Sardesco is believed to have been used in the selection of the Neopolitan Mastiff.

Because these dogs are highly valued, Sardinian people refuse to sell puppies to strangers. A fine is imposed for stealing a dog. Because of this, it has been difficult for dog enthusiasts to determine the ancestry of the breed. It was only speculated that the Dogo Sardesco has descended from the same root stock from where the Bucariscu Calabrese, Cane Curso, Mastino Napolitano, Cane de Braco, UBucciriscu and the other dog breeds in Italy have originated. This rare breed is unknown outside Italy but it is already on the list of banned dogs because of its highly aggressive nature. Banned or not, this dog breed is on the brink of extinction. Foreign dog breeds that have entered Sardinia brought diseases that decimated the Dogo Sardesco. Fortunately, breed enthusiasts have started a recovery program for the breed.