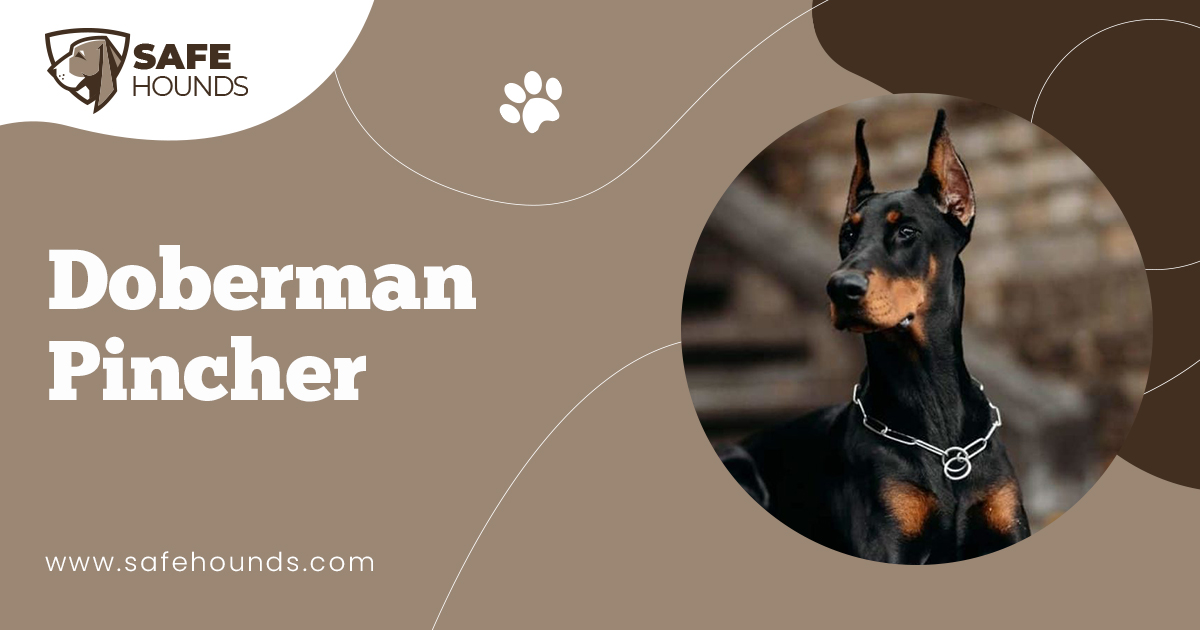 Doberman Pinscher or Doberman as it is commonly known is a domestic dog. It originated as a mixed result of Thuringian Shepherds, Rottweilers, Greyhounds, German Pointers, and German shepherds. Through successive breeding programs, under the guidance of Herr Doberman, the specific breed that encompasses the qualities of all these breeds came to be known as Doberman. Due to their alertness and intelligence, they have been extensively used in police work, military, as guard dogs, and other related work. Although, known for their ferocious behavior, selective breeding has improved their disposition and made them a perfect choice for companionship and family life. They have become energetic, lively, and comparatively docile which makes them suited for homes.

Doberman Pinscher is a medium sized dog and with breeding, they have become sleeker and slimmer for professional competitions. They come in four colors generally black, blue, red, and fawn, with rust markings above the eyes and on the muzzle, throat, fore chest, and on all legs and feet. They have a sleek, short, and thick coat that does not require too much care. Dobermans do require intelligent handling and will provide safety for the owners family and work best if reared in pairs. They get along easily with other dogs and with cats if reared with them from the time they are a pup. Therefore, it is not necessary to have other dogs to share company with your Doberman, however, if you do decide so. They should have time to get to know one another in the beginning.

The Doberman still retains its vicious reputation worldwide due to movies and media coverage as a dangerous dog. But now, thanks to selective breeding, they have lost a lot of their ferocious temperament. They can be trusted with kids and strangers if treated with respect and care.

Dobermans are sleek, energetic, and lively while retaining the qualities of being intelligent and alert. They are a medium sized breed with smooth, short, and rough hair with a thick coat of close lying hair. They come in four basic colors, black, blue, red and fawn, with rust markings on the eyes, muzzle, throat, fore chest, and paws. They have a square body with compact muscles that give the Doberman their speed and endurance to work as police dogs and guard dogs.

Their gait is free, balanced, and energized. They look elegant and command respect with an alert, sharp look. Their eyes are almond shaped and deep set with brown in black dogs and in other colors, the iris blends in with the marking colors. Ears are normally cropped and erect, but some breeders prefer natural ears without docking the tails or ears. Doberman Pinscher stands between 26 to 28 inches for males and 24 to 27 inches in females. They weigh about 65 to 100 pounds. They have a broad chest and a square body that is very muscular. The slimmer variety has been especially bred for professional shows.

The traditional body type is preferred to casual owners. The bigger size dogs are preferred by those who need a guard dog or dogs that work with law enforcement agencies. It has very strong teeth with 22 teeth on the lower jaw and 20 on the upper jaw and joins together in a scissor bite. When it bares its teeth, the menacing look returns in its eyes, which has earned the Doberman its bad image. Dewclaws are removed early after birth.

These dogs are extremely loyal and trustworthy to the owners and their family. He loves to be loved and cared for while returning the gesture with its protective attitude. He can be trusted around babies, kids, and strangers when given proper respect.

With selective breeding, their temperament has mellowed down to become good house dogs. They have a natural instinct to learn and can be trained for detective work, police dog training, and need to be kept busy. They remain watchful, alert, obedient, very energetic, and enjoy playing active games.

They get along well with other pets like other breed dogs and cats. However, care should be maintained initially about each others acceptance. They are well adjusted to all pets if raised with them.

The Doberman has the energy and fast reaction time you normally see with terriers however, they also have the power and intelligence normally seen in herding dogs.

Every breed requires love and care from the owners. As Dobermans have a low shedding coat, maintenance is easy. Brushing or even wiping the Dobermans coat with a damp cloth is sufficient on occasion. They need their coat shampooed sometimes on an as needed basis. Nails need trimming every two to three weeks. Every day exercise is necessary to scatter the high energy found in Dobermans. Most Doberman dogs love to chew, so lots of extra tough toys are necessary for the dog. Professional show dogs need more grooming, even professional care, than normal pets. Dobermans can be trained for seeing dog services and need to be protected from the cold weather.

Although the breed is now domesticated enough to be with the family and children, it originated to fill the gap of a sound working dog. It came into existence through the dedicated efforts of Herr Doberman in 1880, in Apolda, Germany. He was a tax collector and needed a good dog for protection. His dream dog was one with low maintenance, great stamina, energetic, aggressive, and alert that could detect and intimidate intruders. Thus, the man made dog, Doberman, came into existence. With great research and experimentations with different breeds to develop this special breed of dogs started.

Though Herr Dobermann did not keep written records on the evolution of the Doberman, it can be seen from the specific temperament and looks of the dog breeds used to produce this hybrid new breed. German Pinscher gave its alertness and aggressiveness, Rottweilers massiveness and intelligence can be seen. Manchester terrier coat was cloned along with the refinement and elegance. Beauceron contributed its size and color to the new bloodline of Dobermans. It was a very solid build with great intelligence and tracking abilities.

Herr Dobermann passed away in late 1880s, but because of his dedication and love for dogs, the new breed was named after him as Dobermann Pinscher. The work was carried on by Otto Goeller, his close associate. He is supposed to have added the Greyhound to the bloodline of Doberman from where it got the black color. Greyhounds are known for their massive build, stamina, and speed, which is also reflected in the Dobermann.

A few famous Doberman Pinschers you might have seen include Bingo von Ellendonk, the first Doberman to score a perfect score of 300 in Schutzhund, the first registered Dobermann was Graf Belling v. Gronland, Roscoe and DeSoto seen in Oliver &amp, Company, and Zeus and Apollo in The Lads in the series Magnum, P.I..